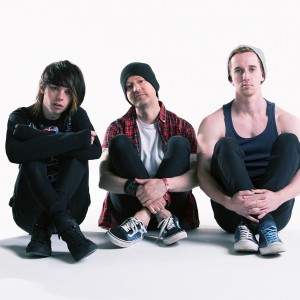 In recent times, the pop-punk scene in the UK has exploded onto the worldwide stage, with a torrent of new bands bursting with talent, all vying to be the stars of tomorrow. It’s an environment that fosters a sense of community and companionship, but it is not without its fair share of competitiveness, as bands rival for attention in what is becoming a veritable cornucopia of great records. So, how exactly do you get yourself noticed in amongst a crowd of thousands?

Well, a good place to start would be with making a deliciously tempting debut EP, which is exactly what Surrey born trio 2far2jump have managed to accomplish with their 6-track debut ‘First Attempts At Everything’. The record, which is due to be released on May 5th as a self-release, sees the band sample elements of their foundations from their star-studded list of inspirations which include the likes of Blink 182, All Time Low, Neck Deep, Paramore, and Green Day. However, this is not simply another white-noise slice of cookie cutter pop punk. The soulful ‘A Winner in a Loser’s Eyes’ and the cool, melodic ‘A Place to Run’ blend seamlessly with ‘Set Your Goals’- the sun drenched, hope-filled opener- and the bouncy, youthful ‘Think for the New Days’, and provide just a glimpse of the scope of this band’s potential to write punchy, fever pitch tunes guaranteed to shake venues across the country to the ground, as well as to pen thoughtful, melodic and reflective airs.

Frontman Alistair Hynes’ vocals cut through the colourful backdrop provided by guitarist Rupert Barker and drummer Aaron Mann, delivering an enticing fusion of uplifting melodies and punchy phrasing, with lyrics which are frank in their delivery and unhindered by over complexities, and instead focus the attention on the physicality of the raw, unpolished vocals that, while they may not be the cleanest, only add to the charm and sense of youthful energy that flows from this EP in waves. The result is a sound which is explosive and uncompromising in both its energy and message, and it is one which has already been making waves in the underground scene, as the band have performed a string of successful shows in and around the capital. And one can’t help but feel that with the release of their next single, which will most likely be the jewel in the crown of this EP, ‘Set Your Goals’, 2far2jump will undoubtedly make the leap out of the confines of the London underground scene and be opened up to the horizons of a broader national playing field.

For me, however, what shines through most brightly in this brilliant spark of a debut is the undeniable sense of both fun and passion that drives this young trio. None of the tracks are overly stylised and none of the vocals or instruments have been bludgeoned and battered by heavy mastering, electric synthesisers or robotic streamlining. It’s rough around the edges in a positively charming way, and encapsulates the excitement and flush of creativity which comes with youth and the new horizons it brings for young creative minds to explore, which is exactly what the genre of pop punk set out to do in the first place. It’s not perfect, but it is certainly passionate, and personally, I’d take passion over perfection any day.

And don’t forget, this is only their ‘First Attempt’: and I expect that with a blistering debut like this, this isn’t the last time you’ll be hearing the name 2far2jump in years to come.

‘First Attempts at Everything’ is due to be released on May 5th as a self release by 2far2jump. Hear their new single ‘Deepdene’ here: