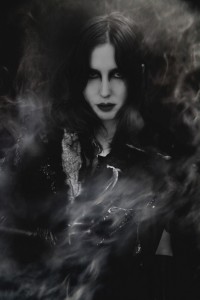 Chelsea Wolfe is an artist that is hard to pin down. Admired by fans of metal, neo-folk and Goth, you can still imagine her music soundtracking a fashion show or popping up in one of the ‘Matrix’ movies. ‘Carrion Flowers’ is the second single to be released in advance of the upcoming new album, ‘Abyss’. ‘Iron Moon’ exhibited some thrilling metal and industrial flourishes and ‘Carrion Flowers’ is no different. Wolfe’s strident vocal haunts synthetic stabs that build up to a crunching release after a minute and half, howling the chorus.

This is ‘Goth’ with a small ‘g’. The eyeliner crowd will enjoy it but that shouldn’t narrow its appeal. This is not far off vibe off early Bats For Lashes and the sky-high drama of the latest Torres album. In most recent press releases, Wolf has talked of the nightmarish ailment of sleep paralysis being an influence on the upcoming record. ‘Abyss’ looks certain to be a frightening but thrilling document when it is unleashed this year.

‘Carrion Flowers’ is available now via iTunes.  The album ‘Abyss’ is due out August 8th on Sargent House.  Chelsea Wolfe will be touring North America this Autumn. Dates and other info at http://www.chelseawolfe.net/