The Streets Of Laredo certainly took a calculated risk decamping to Brooklyn from their home in New Zealand in order to expand from their previous trio into a seven-piece band. Thankfully for them, and definitely for us, their risk paid off. Their debut album ‘Volume I & II’ showcases a collection of both beautiful and boisterous indie folk tunes that are just waiting to charm their way into your record collection.

Opening track Everything to Everyone paints a picture of life in the city as a struggling artist with lyrics like ‘found a fortune but not of gold, in the friends that I behold’ and the track feels equal parts warm and melancholy, perhaps like the place they have made their home. The band is complex – seven members means several guitarists and horn players as well as multiple vocalists. All of this combines to make quirky instrument arrangements and impressive 5 part harmonies that set a pattern for the rest of the record.

Their current single Girlfriend picks up the pace; a catchy number whose chorus is sure to become an earworm immediately after listening. The song bounces along into the calming follow up Need a Little Help, which is surely a definite ‘hug your friend’ moment during live shows.

Other tracks like Homeless and Dear Leron display more of SarahJane’s beautiful vocals up front, and the album continues to show thoughtfully arranged, stunningly fresh sounding folk songs as it continues. The melodies are infectious and the lyrics are wonderfully biographical – each song a rough snapshot of someone’s life, which compliments the authentic feeling of the album as a whole.

The later songs in the album pick up from the mellower middle ground, which stops the record from completely winding down. The Americana influence is heard the strongest here, especially in Dear Leron. Closing song I’m Living creeps gently into a hopeful vocal driven ballad, which melts from one section into the other, leaving the listener blissed out and satisfied.

Streets Of Laredo have produced a perfect example of how indie folk can still sound relevant in today’s music scene, joining the likes of Edward Sharpe and The Head and The Heart in sweet, well crafted songs that are sure to have audiences on their upcoming EU tour dancing and swaying along.

Check if the band are coming near you and catch those harmonies live!

‘Volumes I & II’ is out now via Dine Alone records.

You can see them perform ‘Volume I & II’ on the UK leg of their European Tour: 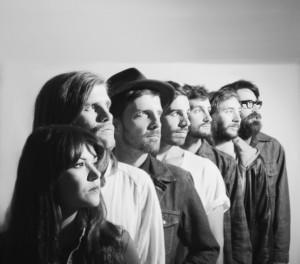