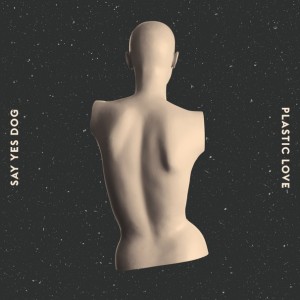 There is something romantic about Synth. It could be its futuristic quality, the idea that something good is out there ready to happen to you. That if you wait long enough your efforts will create a future worth living in. But Plastic Love is not merely a gushing tribute to love. Instead it’s a journey into the uncertainty of devotion and an exploration of what it is like when romance doesn’t work out how you hoped.

The actual style of synth on the record isn’t revelatory. It’s not a game changer, but it is laid down with a level of skill and expertise that makes for a really satisfying listen. The various styles of electro beats create the moods on the record. Tracks like Plastic and Stronger (the stand out track & first single) use synth phasing to express a tone of presence, whilst other songs like You Want my Love and Girlfriend use a creep beat to show darkness.

An interesting theme expressed on those dark tracks is entitlement to love. The lyrics express a confusion at the independence of their quarry. Many of the ideas about relationships on the album are expressed through a lens of teenage longing.

But there are also moments of pain, like when you realise no is final and she just doesn’t want you in her life. On Talk a fear is expressed that too many words are damaging, that quiet is the best shield against failed intimacy. The hopeful and expectant synth notes are betrayed by the paranoia in the vocals.

There are moments of realisation on the record too, Open Wide has a rebirth vibe. It tells the story of being finished with rejection and gaining the knowledge that if love is to be found it won’t be here. Focus is another track about confidence in yourself and hope that once you declutter your mind of failure, you’ll be able to do something good. That you have self-worth. The beat here affirms the hope.

This is an album to share with friends, or to get you going for a night out. It has an upbeat quality, without being cheesy. The tracks flow together with an air of partying, youth and fun. The new age vibe of the synth leaves you feeling up, and ready to have a good time.

For a debut record Plastic Love is an impressive piece of work, and something that the Berlin trio of Aaron Ahrends, Pascal Karier and Paul Rundel can be very proud of. Over the 12 tracks the symbiotic relationship of synth and vocals are sure to have listeners in the grove.