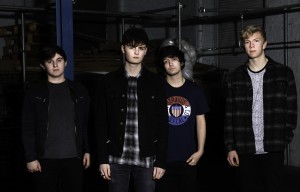 Big, bold, melodic and ambitious: not words you’d usually associate with a band who are still in their late teens who have only recently released their debut EP. And yet, Stockport-born quartet Matter of Mind, -made up of Jordan Lambert on vocals and rhythm guitar, Ash Meadowcroft on lead guitar, Rob Bramwell on bass, and Connor McQue on drums and backing vocals – can claim all of those attributes. Their debut EP ‘A State of Mind’, which they released back at the beginning of last year, created plenty of buzz in the Manchester rock community and among several industry figureheads, pricking ears and turning heads when it received praise from the likes of Louder Than War, Fred Perry Subculture, This Feeling, Clint Boon and Terry Christian. The band have also played a string of shows across their hometown of Manchester, all of which have been very well received by members of the ever growing underground rock scene in the city.

Following on from that success, the band have just released their new single ‘Far Too Wrong’, and it does not disappoint. The initial melancholy opening chords give way to grunting basslines which are overlain with a brooding yet powerful melody and inventive guitar work, not unlike the sound cultivated by Scottish rock heavyweights Biffy Clyro. Yet there is a subtlety beneath the cool industrial rock of this track, which also boasts grunge inspired undertones that hint at the influences that legends like Nirvana have had on the band’s sound and creative vision.

Lyrically, the track speaks of the pains of youth and growing up outside the realms of popularity, a theme that resonates with many young people, however this is a band whose sound is far from juvenile. Local alternative magazine Louder than War highlighted the fact that “There’s an intelligence behind these big rock songs that isn’t always evident with new bands”, which for me conveys what appears to be at the heart of this band’s ethos and mentality when it comes to making music. ‘Far Too Wrong’ is a track that is powerfully understated, and all the better for it. Rather than aiming to turn heads with brash, smashing guitars and punchy, angst filled punk lyrics, Matter of Mind have chosen to create a layered, intricate rock song which still manages to retain a sense of purpose and drive in its melody and convictions. It still contains the spark and flair of youth, but combines that with an intricacy that one would usually associate with bands far more established than these fiery, passionate teenagers.

The track’s accompanying music video reflects and refracts the atmosphere of the song through its cold, industrial setting and monochrome images that distort perceptions and capture the imagination of the viewer, drawing on the undertones of confliction and the uncertainty of identity that comes with youth. And in much the same way, the track in its entirety gives the distinct sense of something bubbling away under the surface, the edges of which can just be glimpsed in the power that lurks behind the dark lyrics and the insistent grunt of the bassline. One gets the unerring sense that within this young quartet lurks the potential for something huge, powerful and volcanic to spring from the shadows, and burst forward in a fiery explosion of powerful, arena shaking rock music.

Only time will tell, and I, along with many others, will be eagerly waiting to find out.

‘Far Too Wrong’ is available to stream right now. Matter of Mind are also playing a show at Dive in the Northern Quarter in Manchester on Thursday March 9th.

Watch the video for ‘Far Too Wrong’ here: