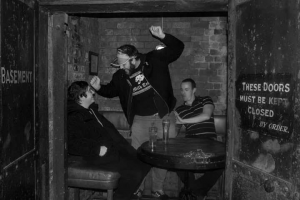 Manchester has always been a city renowned for its contributions to the world of music, and although the days of The Smiths, Oasis and The Stone Roses may be behind us, the city still boasts a thriving underground music scene, and the debut EP from raucous Manchester trio Tio Rico- made up of Ed on guitar and vocals, Scott on bass and vocals and Matt on drums- proves just how alive-and-kicking that scene still is. After forming in December 2014 and playing a successful string of shows and festivals, the band’s debut EP ‘Business & Pleasure’ follows the release of their debut single ‘Mr Big Shot’, released in November of last year, and delivers a sucker punch taste of their anarchic, self-coined ‘Noise Gunk’ sound, which takes the passionate energy of punk and the darker hues of grunge and chucks them into a blender, whizzing them all up together to create a fiery wall of sound that hits you with full force from the word go! Packed to bursting with screaming guitars and thumping basslines, this EP is a delight for any fellow mosh pit loving folk, as it is sure to shake any small, packed out underground punk venue to the ground!

The opening notes of the first track, ‘Hate Me’ come piling in with no warning or apologies, layers of pounding guitars and thumping bass assaulting your eardrums, but still bringing with them that adrenaline inducing bounce sure to fire up the mosh pit in no time! From the thunderous opening line ‘What the fuck is happening here’, the grunge element of their sound becomes apparent, and yet somehow the fusion of the low, moody vocals with the eclectic anarchy of the guitars that continue to rage in the background really, really works! Lyrically, ‘Article 7’ is a slice of pure punk rock, exactly as it should be, a fiercely independent statement about the rejection of conformity. However, the rising tension that builds throughout the track, thanks to the incessant drumroll pulsing away in the background of the verses makes it feel like this track had another dimension that it was straining to break into, but that punishing tidal wave of a breakdown that it promised never seemed to make an appearance, on record at least- there is a sense that when played live to a roaring crowd, that issue of drive would be fully resolved!

That lively spring makes a re-appearance on ‘Maximising Prophet’, the old school groove creeping in at the edges of the melody elevating the song and giving it a lighter tone and an infectiously upbeat, raucous atmosphere, which continues into the opening riffs of ‘Somewhere Between’, where a lack of energy and drive are of no issue whatsoever- in fact, the exact opposite! Short, sharp and defiant, it is impossible not to see this song being blasted out from tiny stages in sweaty rooms where the walls are ingrained with punk rock history, packed to bursting with a spinning circle pit! The tongue-in-cheek frivolity of the lyrics of ‘T-Rex Charlie’ cannot fail to put a smile on your face no matter how bleak the skies may be, and the relentless, driving bassline means that the fiery intensity of the track never drops for a single second, even when the listener is being taken on an in depth trip through a eclectic menagerie of animal metaphors that you can read as much or as little into as you like! The competing, raucous dual vocals and endearingly rough-around-the-edges fringes on the production only add to the youthful joy of this track, a complete riot from start to finish and, in spite of having all the other artistic, wonderfully crafted tracks on this EP to choose from, on the grounds of sheer fun and childish idiocy, ‘T-Rex Charlie’ takes the crown as my favourite track on the EP by a mile! And one thing’s for certain- no matter what you do, it will be stuck dancing around in your head for the rest of time!

Bringing it back to the realms of sanity with anthemic closer ‘Invincible’, Tio Rico prove that they can do big, swinging and uplifting rock melodies just as well as they do youthful, raucous and ridiculous. With its air-punching rallying cry of a chorus, road-trip ready melody and a whole host of potential for audience interaction when this track is played live, from clap alongs to impassioned ‘na na’s with the kind of punch that the Blink 182 of old would be jealous of, this song begs to be sung back by a swaying crowd with fists held aloft!

We might be heading into dark times in the world at the moment, but if this EP is anything to go by, the Manchester punk scene isn’t going down without a fight! When the world seems so very bleak, this kind of wonderful catharsis is exactly what we need. Tio Rico have produced a stellar debut in ‘Business & Pleasure’: screeching, adrenaline inducing anarchy with elements of classic rock, grunge and a few good laughs thrown in for good measure, and I absolutely adore it!

‘Business & Pleasure’ is out on July 7th as a self release. Tio Rico will be playing the Rebel Cats 1 Year Birthday bash in Bradford and the Evil Hoof Picnic in Manchester, as well as a string of shows throughout this year.