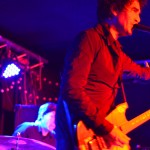 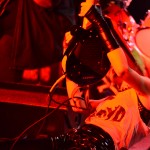 Puss Johnson of Pussycat and the Dirty Johnsons

World-renowned and legendary garage rocker and Pussy Galore / Boss Hog / Heavy Trash / Blues Explosion frontman Jon Spencer hits up the Exchange as part of his Hitmakers tour, joined with the Hitmen, they brought real rock n’roll to a Thursday night in Bristol.

He’s now going round with a lively supporting act, the aptly named English punk rockers Pussy Cat and the Dirty Johnsons. The lithe, catlike lead singer, Puss Johnson, complete with tail and hair gelled into horns, going all out in her performance, made both the stage and the crowd her play things as she stalked around. She brought a youthful fervour to the show with the energy turned right up. A great opening. Fringes, boots and leather jackets abound, Bristol’s cool cats are ready.

So this is what the crowd has been waiting for, Jon Spencer makes his way onto the stage with his hitmen, and is given the warmest of Bristol welcomes by some clearly long term fans. And he dives straight in, treating us to a slick set with a mix of new stuff and the classics, we’re showered with some of those irresistible Hollywood-worthy hooks. His voice drawling over the tracks as he snarls his lip over the mic like  a scuzzy Elvis, the toe tapping repetition of the heavy dirty bass infects everyone there. He doesn’t say much to the crowd, the interaction is limited, but he just seems to give them what they want.

There’s in fact barely a breath between each song, just track after relentless track, synths, guitar, drums and percussion all expertly combined to create a barrage of danceable trashy noise. They continue to lunge in delivering the recent singles ‘I Got The Hits’ and ‘Do The Trash Can’, all sprinkled with ‘baby’s, ‘bam boom bang’s and that catchy kinda riff he’s known all too well for Spencer reassures us he has the hits. Obviously there is a more generous helping of the newer stuff, but the crowd still love it, and the songs continue to intertwine with each other seamlessly. He brings a subtle swagger to the stage as he drags his guttural voice across each song, accompanied by swathes of groovy yet dirty guitar and controlled feedback.

There is a political charge as we’re told to ‘worship the missile’ and ‘praise the bomb primates’ and they have really brought the trash to the stage, which might be a message in itself. As Bob Bert has brought with him a couple of American trash cans, looking a little like they came out of a Sesame Street set to British eyes, it’s almost an antithesis to their talented, experienced and slick operation.  Nevertheless the percussion is flawless as the cans, amongst other rubbish paraphernalia, are beaten and clanged expertly to each song with a hammer, adding to the garage aesthetic.

The crowd screams and yells with more and are spoiled with an encore of classics, continuing the well-honed clamour, the audience are left knowing they got what they came for. It’s a hell of a show, further cementing Jon Spencer’s status as a king of trashy, noisy rock n’ roll.