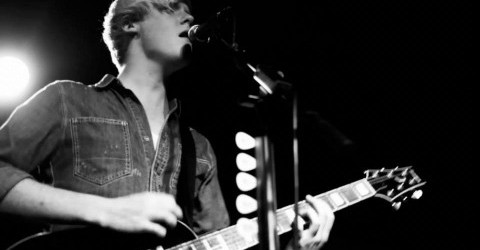 Lets see if album reviews are like riding a bike, this is my first review in nearly three years and a lot has happened whilst I’ve been on my sabbatical. I don’t own my own music anymore, I stream it directly form the Internet, the only CD player I have is in the car and the last albums I bought have all been through self funded pledge websites.

Some may say this is an industry in decay but whilst I don’t think the corporate infrastructure exists, opportunities are there for self-motivated bands with a bit of nouse about them.

So we come to Dark Stares, a four piece from St. Albans who merge skewed angular rock on their new EP ‘Soul contract’.

I must admit that I wasn’t expecting such a mellow sound the first time I played the opening track ‘Liquid Reign’ which seemed to slip past with a minimal of effort required from the listener. This isn’t a criticism but an appreciation of a song crafted where all the pieces fit together seamlessly. For some reason, it reminds me of the early 90’s Manchester sound.

‘Hypnotise’ lowers the bass line significantly but the melody is still clearly evidencing further proving that the band can deliver a soulful sound with a dark hypnotic edge.

An EP should be a showcase of a band’s ability, showing what they are capable of in a clear concise package that could otherwise get lost on a full length release. As the EP progresses, there are more mainstream sounds showcased on ‘Ordinary way’, a real melting pot of emotions on ‘Animal’ and a great opening riff on the final track ‘Cruise Control’ which is the perfect end to proceedings.

It’s difficult to compare Dark Stares to other bands as they have the ability to merge a number of styles and genres into a sound that should vibrate your speakers without the need to turn it up to ten.

I reviewed the album via Spotify, downloaded it directly to my phone for a further listen and got a better understanding of what the band was about from their online presence, Yes I think Dark Stares will fit in well with this new music scene, more please.