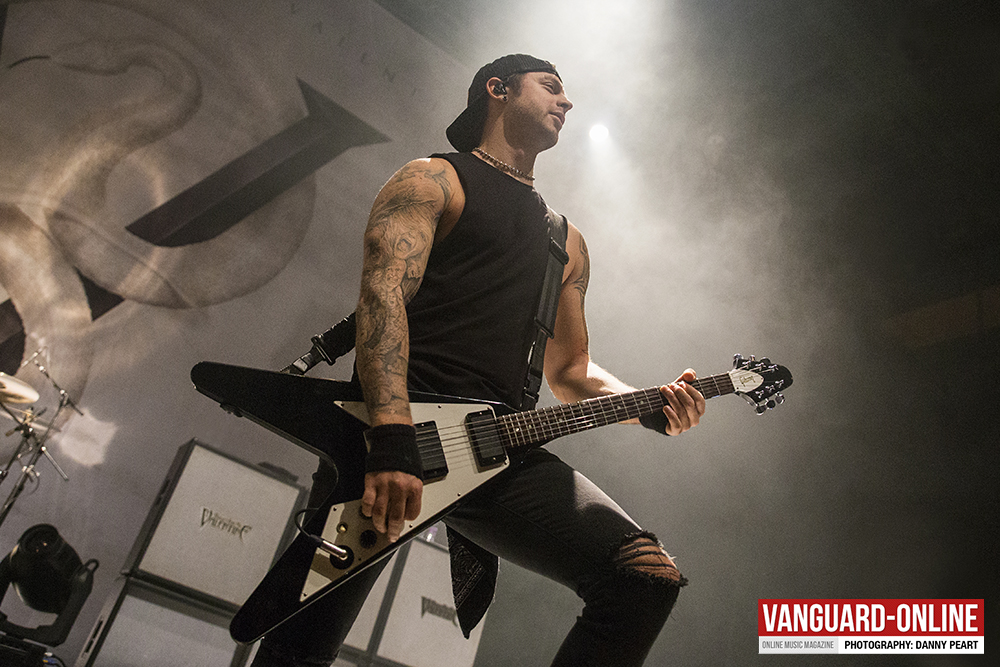 We can’t remember the last time their was a proper rock show on at the York Barbican, so it’s no surprise to see rock and metal fans flooding the street outside the Barbican centre anxiously awaiting the doors to open for tonight’s almost sold out show for the Welsh metal quartet Bullet For My Valentine.

Having the pleasure of kicking off tonight is the Japanese post hard-core Band Coldrain (7), who we know very little about. But they take to the stage like a racehorse out of the gates and dive straight into the powerfully driven opening song ‘The Revelation’ setting the pace high for the set. 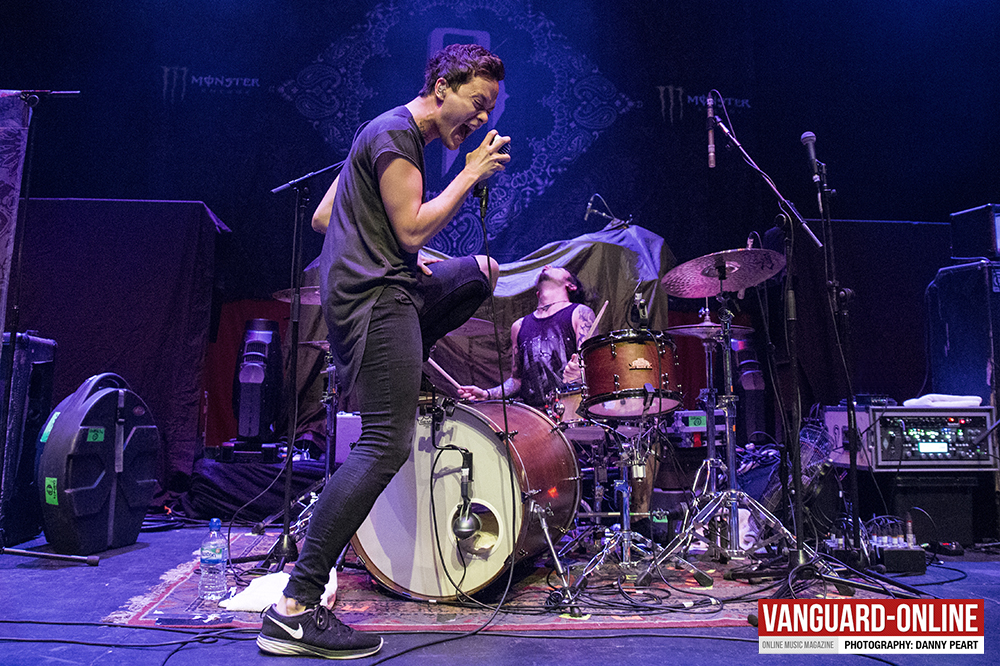 The band look and sound tight as they fly through a mighty set of heavy post hardcore songs including ‘No Escape’ and the new single and highlight of the set ‘Gone’, as they throw themselves around the stage. Guitarists Yokochi And Sugi Can’t stand still for a second and aren’t shy of a quick pose mid solo for the fans on the front row. Vocalist Masato sounds fantastic, and makes tonight’s performance look easy hitting all the notes and screaming sharply from song to song.

The Japanese metal quintet close the set with ‘The War Is On’ To go out on a high leaving all the latecomers wondering what they missed out on as the crowd respond to the bands efforts with loud applause and cheers. A fantastic set by the Japanese quintet who are likely to make a lot of new fans across the UK on this tour if they perform with as much drive and energy as they have tonight for the rest of the tour. A pretty strong start from Coldrain leaves While She Sleeps (7) on their toes as they take to the stage, but the band take to their positions with a steady swagger looking calm and confident they can really get this crowd warmed up for tonight’s headliners.

‘Brainwashed’ opens the set like a bull in a china shop destroying everything in its path with the band proving they can live up to their reputation of a outrageously wild show, as they launch themselves around the stage thrashing their guitars kicking and screaming. Frontman Lawrence Taylor can make one hell of a noise screaming through each song giving everything he’s got, and when he’s not screaming he’s stood on the edge of the stage spinning his head and hair like a propeller to the music encouraging the front row to get involved.

There are noticeably a lot of fans here tonight just to see While She Sleeps as the place erupts for ‘Death Toll’ and ‘Our Courage, Our Cancer’ with the metalcore fans screaming and moshing along throughout the set. Every member of the band look to be having the time of their lives as they cover every inch of the stage jumping and moshing along whilst shredding through the set at a furious pace. 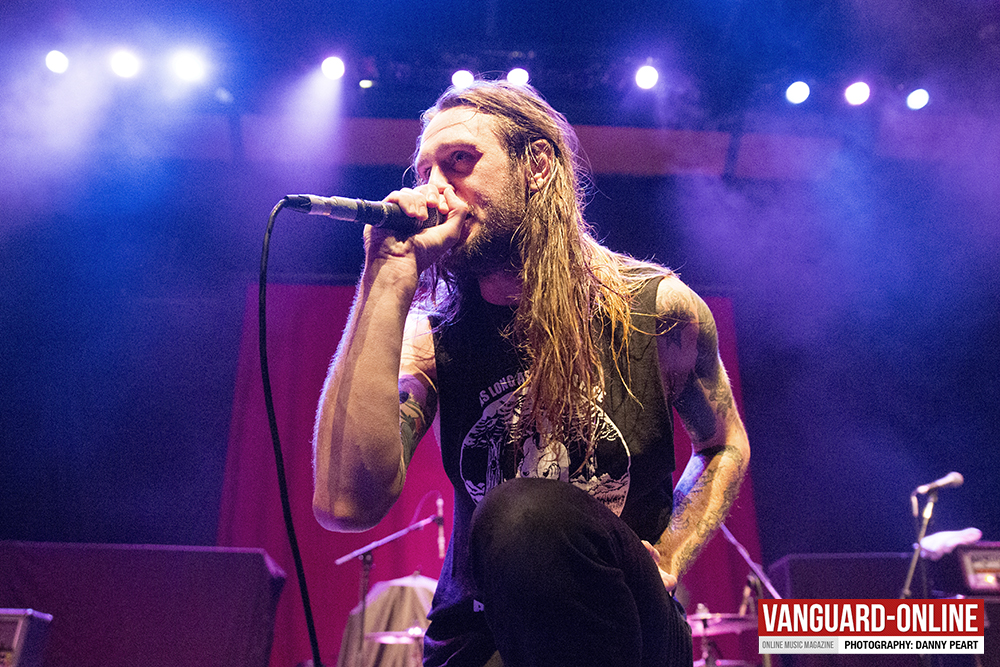 ‘This Is The Six’ and ‘Seven Hills’ are the perfect songs to get the fifteen hundred people or so on the floor warmed up as circle pits, mosh pits and crowd surfers are appearing for the first time tonight. “This is already shaping up to be the best show of the tour so far!” claims the frontman before asking the crowd to applaud the security for keeping everyone safe, and a second applause to “thank them for keeping you safe while they catch the hundreds of you crowd surfing right now”.  ‘Seven Hills’ breaks out with everyone following the demands of Lawrence Taylor loosing their minds crowd surfing and moshing in their dozens, before the frontman decides to get involved by diving onto the crowd to finish off the song crowd surfing.

The Yorkshire chant is out in full force for the final song ‘Four Walls’ which closes the set on a fantastic high making sure the pace and crowd participation isn’t dropped. Although it felt like their was little diversity in the set, While She Sleeps have been a perfect support act for Bullet For my Valentine getting tonight’s crowd ready for a full throttle headline show. 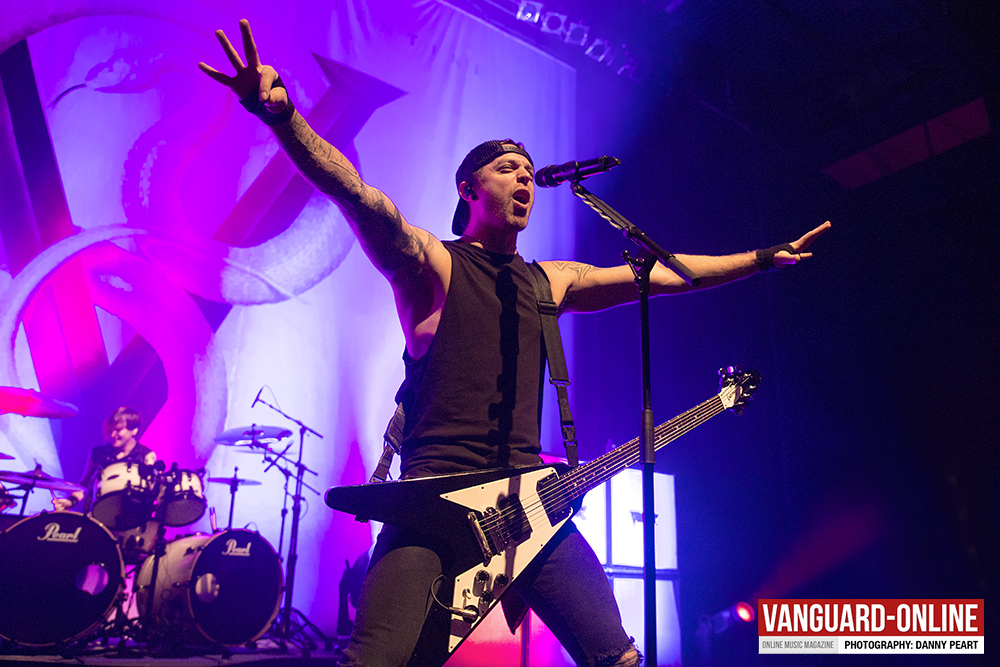 Tonight is the first time Bullet For My Valentine (8) have played a show in York, so it’s a big show for all the local fans, and you can feel the excitement build in the room as the stage takes shape for the Welsh headliners to kick off the set. A giant ‘Venom’ banner hangs from the roof and everyone here is looking forward to hearing some tracks from the new album live for the first time after it’s success in the UK charts entering at number 3 after a great reception from the fans.

We don’t have to wait long as the lights drop to deafening screams, and the four members take the stage to kick off the set with the new albums leading single ‘No Way Out’, which sets the room alight with energy from the thunderous drums and thrashing guitars. Frontman Matt Tuck looks as confident as ever on stage as he sings and screams his way through the start of the set in ‘4 Words’ and the fantastic ‘You Want A Battle? (Here’s A War)’ with the crowd chanting the intro before the song kicks in to its heavy full throttle intro, progressing to an infectious chorus. The set steps up a notch for ‘Raising Hell’ and ‘Scream Aim Fire’ which Matt Tuck demands to feel the room shake, and the crowd don’t disappoint as the floor is bouncing from start to finish. “Holy shit you guys are fucking amazing!”

Tonight’s show isn’t just about the new album however as Bullet explain, it’s been 10 years since the release of their debut album ‘The Poison’ which they boast with great pride. The title track proves that the oldest Bullet songs still have the edge they had 10 years ago live and the crowd don’t grow tired of the older material Bullet have in their locker. The pounding drums have the crowd clapping into a song a typical song by BFMV with it’s furious drive and Matt Tuck screaming intensely throughout and over the outro which guitarist Michael Paget leads with yet another supercharged riff. 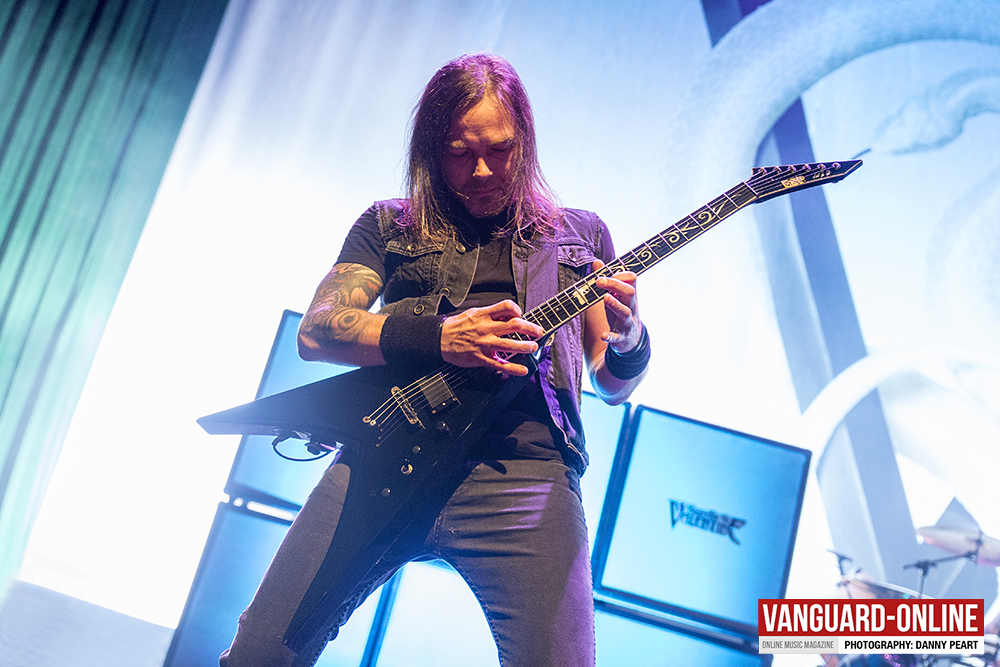 The band disappear with the Frontman left centre stage to start a stripped back version of ‘The Last Fight’ which has every single person in the room singing their hearts out for a chorus before the song kicks in as the band emerge for a full throttle performance worthy to be played on a stage ten times the size and still have the same response.

After a high paced start, the set becomes to tire slightly towards the mid point, as even though the newer material sounds great, many fans here tonight aren’t all that familiar with it just yet, particularly ‘Venom’ leaving half the room taking a breather and calming down as they watch on without getting too involved. However ‘Worthless’ does manage to bring things back to life with its powerful chorus and screaming, before guitarist Michael Paget takes centre stage to show the York crowd his shredding skills with a thrilling guitar solo, and manages to play his part by getting the rowdy crowd cheering and clapping into the supercharged solo which leads into ‘Army of Noise’.

‘Tears Don’t Fall’ provides the highlight of the set as for the first time tonight literally everyone in the room is singing along with the venue exploding into the overwhelming chorus, which proves what both Bullet For My Valentine and the York crowd are really capable of, and if it had been close to this throughout the night it could have easily been one of the best shows of the year. 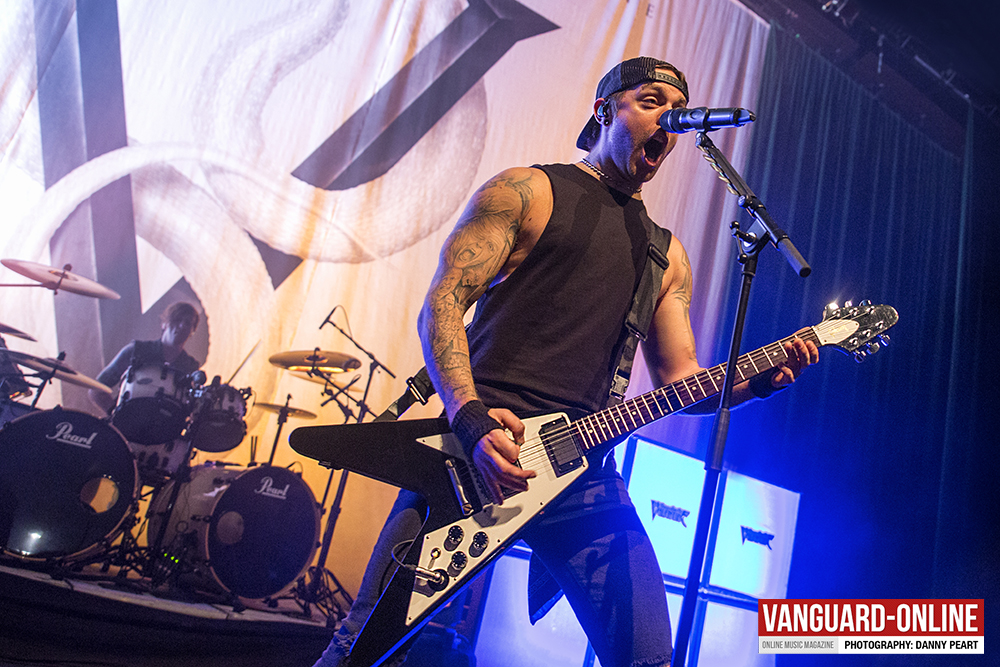 The lights flash and the drums pound out the heavy intro to ‘Your Betrayal’ for the encore, which picks up exactly where the Welsh metal quartet left off. Mosh pits break out across the floor in response to the frontman’s demand to finish the show in the way it should. “We’re gonna get your ears ringing and your neck sore as fuck in the morning, no more fucking around!” what follows is the fist pumping energetic ‘Waking The Demon’ which makes sure the York crowd break out into a sea of head banging. “You guys are fucking amazing!” salutes the guitarist as the extended breakdown gears up the crowd for one final circle pit to show us what they have as they go crazy to the guitar solo.

As the band leave the stage to loud applause and the standard Yorkshire chant, you get the feeling the York crowd are more than appreciative of the bands performance tonight. Overall the Welsh metal suit sounded fantastic live, but visually they did lack something as they weren’t too energetic, and the stage production could have been a little better. However this is only a small venue and Bullet For My Valentine’s decision to let the music do the talking is enough to impress us with a top draw performance! 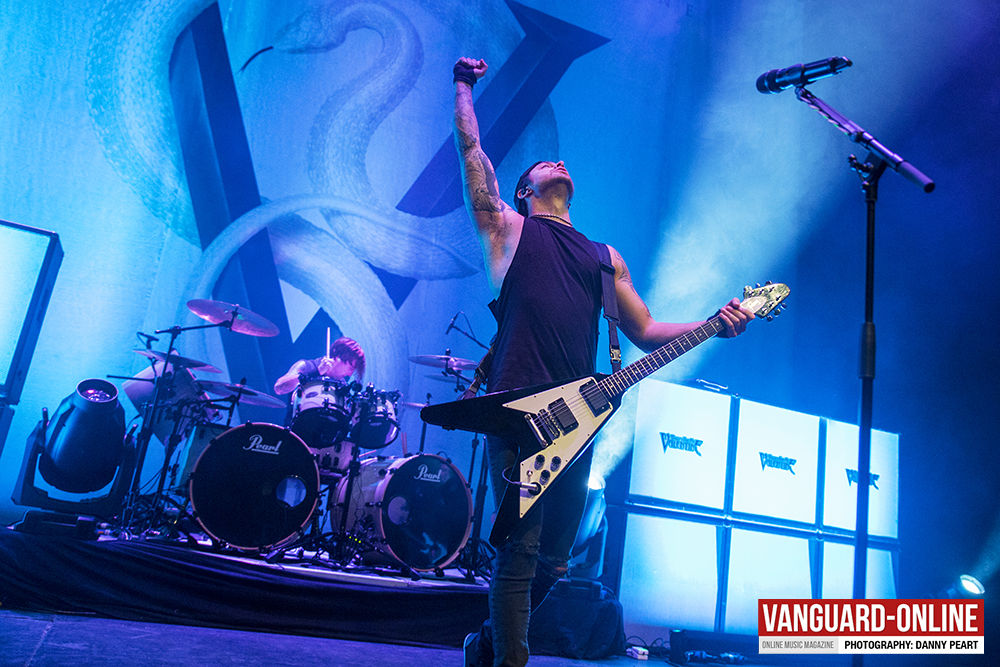