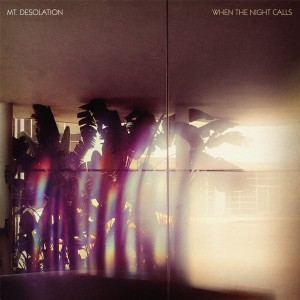 Mt. Desolation – When The Night Calls

In 2010, Mt. Desolation – the side-project of Keane songwriter and pianist Tim Rice-Oxley and bassist Jesse Quin – released their eponymous debut album, a low-key yet impressive foray into country-rock. Eight years later, Mt. Desolation have returned with ‘When The Night Calls’, a record that is a clear progression of their sound while also bearing the life experience that has been gained in the intervening years.

Mt. Desolation (also comprising Phil Renna, Fimbo and Philip Scott-Ilsoe) takes its name from the writings of the American author and poet, Jack Kerouac, whose novels ‘On the Road’ and ‘Desolation Angels’ helped to define the Beat Generation, a literary movement in the 1950s inspired by meandering travel in search of hedonistic and spiritual experiences. The band’s love of Americana is evident throughout the album, and musically it evokes some of America’s most prolific songwriters.

‘When The Night Calls’ is an album of more emotional depth than its predecessor. ‘Someday, Somehow’ is reminiscent of Bruce Springsteen in its nostalgia, longing to rekindle a relationship that has inexplicably ended. ‘How To Fly’ articulates the self-consciousness at the beginning of a relationship with an exhilarating melody in the style of Tom Petty.

‘The Moon Was Down’ is a gentle folk song and a serene moment on the record, while Rice-Oxley’s vocals are reminiscent of Morrissey on the eerie, lamenting ‘Valentine’. Lyrically, it is one of his darkest songs to date: ‘You’ll be no one’s if you’ll not be mine’. Both songs sound unlike anything Rice-Oxley has written before, while managing to be distinct from each other.

Quin provides a lighter moment on the jaunty ‘Distraction’, which encapsulates the album’s theme of being lured away from life’s responsibilities by unnamed impulses and desires: ‘The youthful ways of city nights could tempt you back without a fight’. Similarly the album’s title track, also by Quin, is an exuberant homage to escapism: ‘And when the night calls you always answer/Escaping the world you’re living in’. Each song on the album has been lovingly crafted and skilfully explores how life’s complexity can be both forbidding and liberating.

Mt. Desolation have said the ethos of the band is the simple joy of friends playing music together, and for the listener, that joy is infectious. Rice-Oxley and Quin complement each other perfectly on ‘When The Night Calls’, an intriguing album that transcends its songwriters’ modest ambitions.

When The Night Calls was released on Island Records on 25th May 2018.