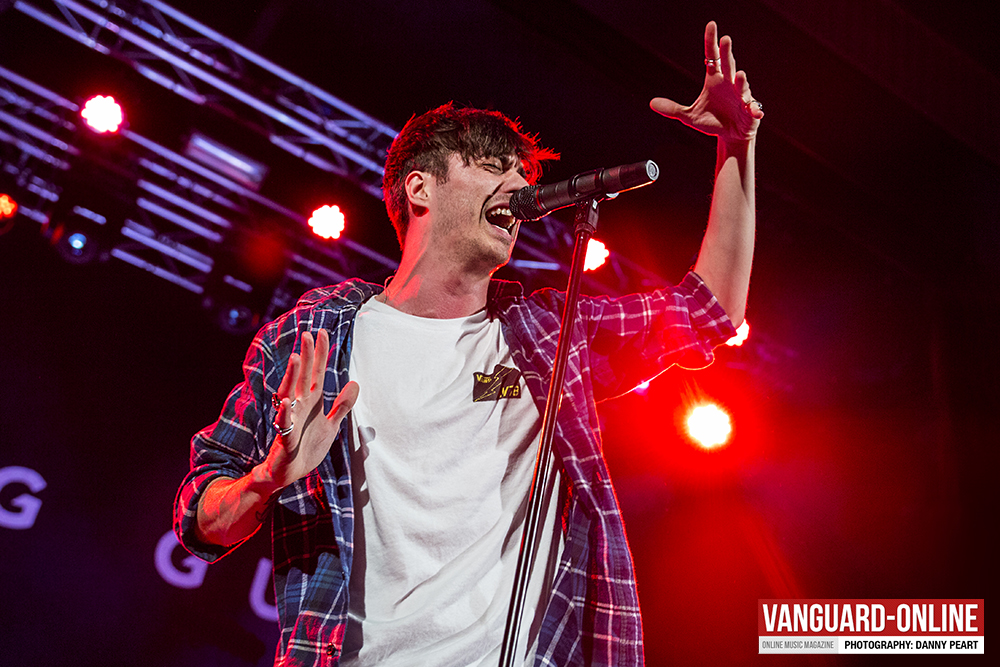 After a small but successful first part to the tour in April, Young Guns return back from America to release brand new album ‘Ones and Zeros’ and get beck to business by finishing touring across the UK. Tonight is Manchester’s turn to get involved, and an almost sold out Manchester Academy 2 awaits the highly anticipated return of the Buckinghamshire boys to this very stage.

Before Young Guns hit the stage, a decent sized early turn out half fills the academy for support act Nothing But Thieves (7) who are starting to make a name for them selves. Tonight they are here to win over a few fans, and there is no better way to do so by opening with ‘Itch’ which has been all over Radio 1 of recent, with Fern Cotton herself stating it was her favourite track of 2015 so far. It’s slick guitar riffs and catchy chorus kicks off the set perfectly and has everyone’s attention from the off. 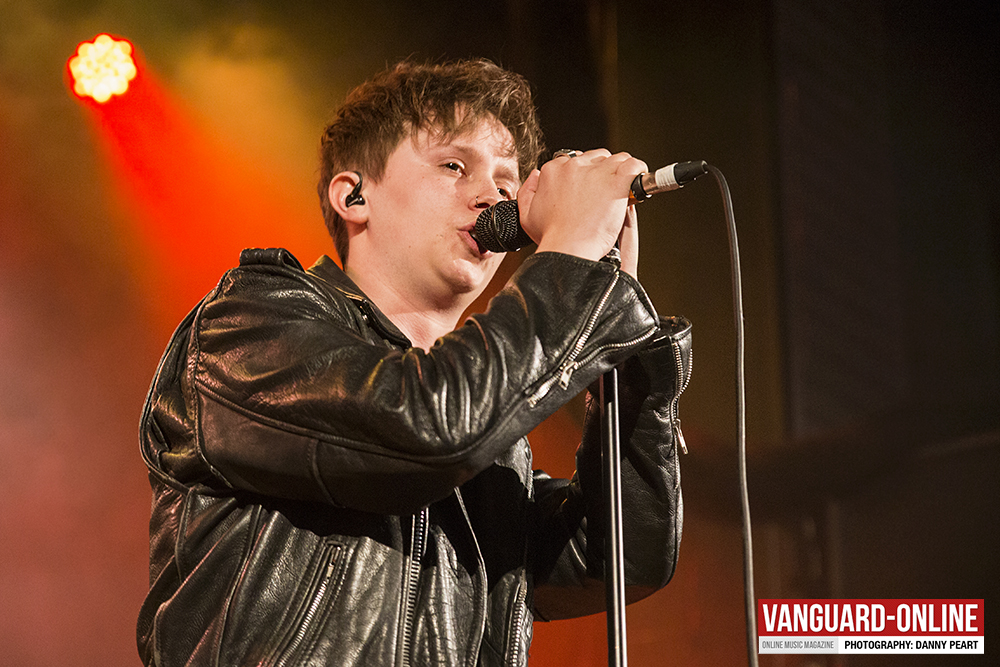 Tracks such as ‘Hostage’ and ‘Trip Switch’ follow, and are built upon a strong guiding baseline and drums, and have a hint of Kasabian in them stealing the limelight from the frontman from time to time, however Conor Mason gives a strong vocal performance throughout the set and has a great stage presence aside guitarist Joe Langridge-Brown which can not be overlooked, with a few rather impressive guitar solos and riffs appearing in each song. The crowd’s eyes are fixed on the stage and the head nodding proves that most here tonight are not overly familiar with Nothing But Thieves, however they and we like what we hear so far.

The fantastic ‘Ban All The Music’ closes a convincing set with the bands strongest performance of the night, with its big chorus mixed with slick guitar riffs we are left wanting more. It’s safe to say a short but sweet set from Nothing But Thieves was all that was needed tonight to get people turning their heads in the right direction. We are sure to hear a lot more of these guys in the months to come. 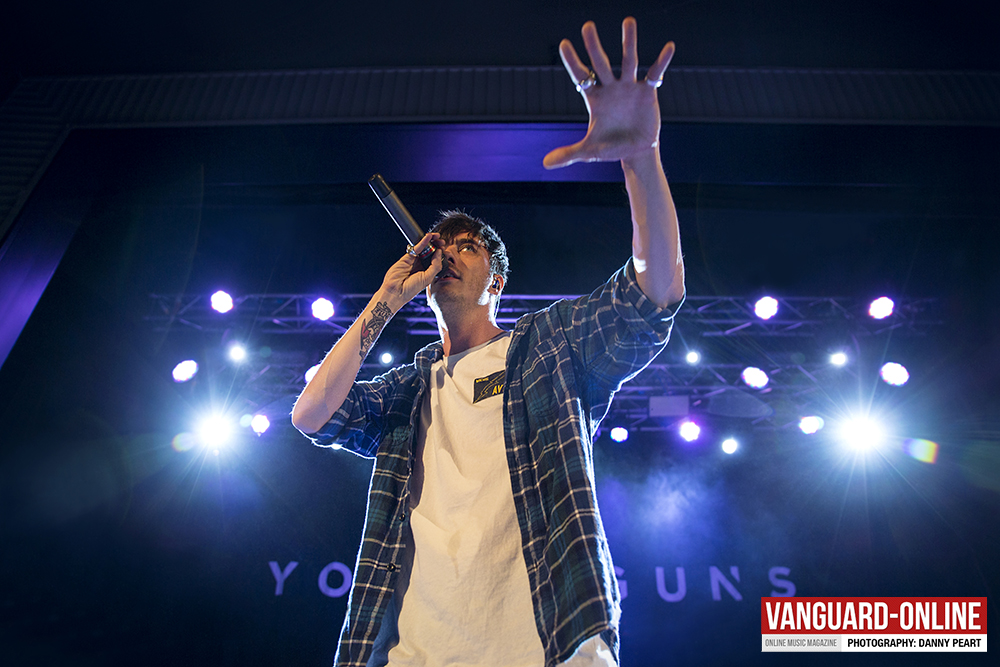 After a short break the lights black out and screams ring out from wall to wall as Young Guns (10) take the stage and fire themselves into opener and lead single from ‘Ones and Zeros’ – ‘I Want Out’ with frontman Gustav Wood flies across the stage with the mic stand in hand like an energizer bunny on full charge, as the band are bouncing in sync to the song. Its clear already that since we last saw them, they have definitely upped their game and have worked on their stage presence, and with plenty of touring behind them just recently, it’s set to be one hell of a night. ‘Dearly Departed’ makes sure things stay in first gear, and the new album opener ‘Rising Up’ is one of our favourites from ‘Ones and Zeros’ with its sharp riffs and fiery lyrics from the frontman getting everyone in the room all rowdy and pumped up for the rest of the show. But this still isn’t good enough for the frontman who want’s the academy to kick off; “I can see two security guards down here that have had an easy night, I wanna see crowd surfers!” Like moths to a flame the place goes crazy with crowd-surfers gliding across the room, and fans up on shoulders towering above the crowd as they sing along to the mighty ‘Towers’ which still sounds as good live as it did when we first heard it! ‘Crystal Clear’ has the room bouncing, proving that even with a bunch of new material, it’s still the golden oldies that get everyone excited when these guys hit the stage.

Young guns are a band that thrives off live performances. They perform each song perfectly in time/tune but also give each live track that extra bit of personality and character to set them selves above the rest. You can’t help but get involved in the moment, especially with Gustav wood at the forefront of the stage keeping everything in top order. He won’t let the crowd rest, demanding they are moving and jumping with every opportunity he gets within a breakdown or pre chorus of each performance of the 15 song strong set.

‘After the war’ generates an amazing reception leaving a lot of hard-core Young guns fans with their time to shine and have their voices heard amongst the rest. Even though the old tracks still sound seamless live, tonight is all about celebrating the start of a new era of Young Guns.
“All that matters is that you guys are here tonight at the start of the new album cycle” boasts Gustav and you can feel a real sense of appreciation in the tone of his voice, knowing full well how hard these guys have worked on the follow up to the successful second full length ‘Bones’.

It’s clear that Young guns are on to the next chapter of their careers now and it’s more than welcomed by the crowd tonight. A set with a few sparks of fresh music made for live performances like this one. ‘Daylight’ and ‘Speaking in Tongues’ are two perfect examples of the growth and maturity of the band, with their newly found electronic edge, aside some remarkable riffs and gang vocals between Gustav Wood, John Taylor (Guitar) and Simon Mitchell (Bass) giving the new songs some dynamics and depth. 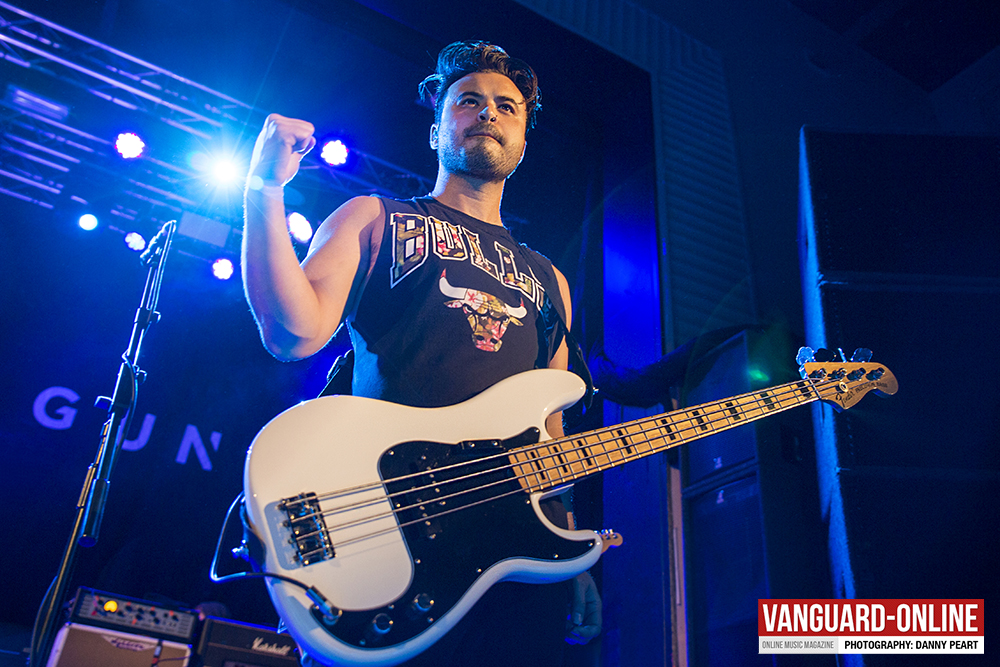 Not only have the Buckinghamshire quintet upped their game in writing new music, they also look like they have worked a lot on their live performances too. The band work their way around the stage full of confidence and look well rehearsed, with bassist Simon, and both guitarists John and Fraser moving in sync back and forth to the front of the stage bouncing as Gustav moves back and forth at front stage leaving the band in structured rehursed 1-3-1 formation.

The frontman takes a moment to remind everyone that ‘Ones and Zeros’ hits the shelf in three days time; “Our new album is out on Monday, how many of you guys have pre ordered it?” an almighty roar is thrown back in his direction, “How many of you have already downloaded it illegally?” a cheeky “waaahy!” directs its way back from a fair portion of the crowd, which is greeted with a response of “Fuck you!” from the frontman as he laughs out loud. Gustav looks like he’s having the time of his life tonight, grinding from ear to ear and chasing crowd surfers across the front of the stage. Record sales don’t mean anywhere near as much as ticket sales and people making the effort to get down to party to Young Guns, and this is exactly what you expect from a rock band thriving on touring and partying with every city they can. 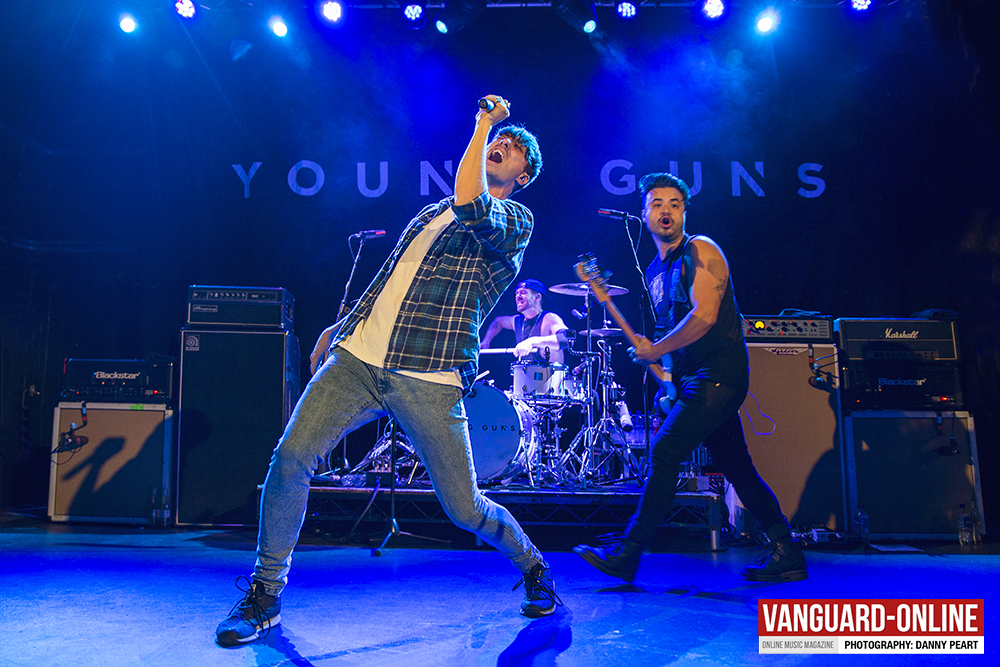 “I’m not bullshitting, but this is the best show of the tour, and it’s really been so special to me, I feel so well connected with everyone here tonight… We’ve got a thing tonight, it’s really close I like it!” There is something in the air tonight and it’s not just the frontman that feels it, everyone on the floor and the stage are pumped and ready to go crazy for each song, and it’s clearly getting to Gustav as he can’t help but hail the crowd for their performance tonight. “This song goes out to everyone who’s made me feel ten feet tall tonight!” A rather emotional performance of the moving ‘You Are Not’ follows leaving Gustav not feeling as “Lonely like everybody else” as he bellows out in the chorus.

“We’re going to go have a fair few drinks tonight, so let’s make sure tomorrow is the worst Young guns show we play…” Jokes Gustav who’s head is in the clouds at the moment after tonight’s show. A flawless performance of ‘Bones’ as ever closes the set in a fantastic fashion, and one last call to the crowd to see everybody crowd surfing from the frontman makes sure it finishes with mayhem. The band soak up the well deserved applause and leave the stage, but not before Gustav gets one final word in: “If your going to Download festival we’ll see you on the Friday, but keep it a secret alright!?” … Whoops.

It looks like one of Britain’s finest live rock band are back on their toes and they are only just getting started. These guys won’t rest until ‘Ones and Zeros’ has them crowned heavyweight rock band of the world. A big performance from a soon to be dominant band.

Tags: featured Live manchester nothing but thieves ones and zeros yg young guns