With an opening slot for Pulled Apart By Horses’ multi-room Christmas extravaganza, Weirds knew they had to let rip – and they did. Giving themselves regular permission to go wild, they kept the crowd waiting for the next outburst. Pushing out heavy pulsing rock in the PABH / Castrovalva vein, the energy was high. 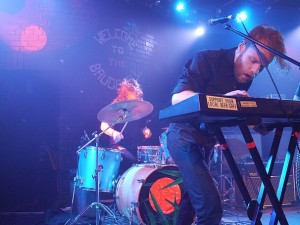 From just up the road, in Burley Park in Leeds, the band wanted to prove it to the PABH followers and win new fans. They threw themselves about, the guitarist shaking his long hair about, the drummer a blur and the bassist striking poses, shirtless. Special mention for lead man, Aidan Razzall. Screwed up face when on keys, screwed up everything else when on vocals alone or guitar. By the second song he was off and into the crowd, legging it round the venue and climbing the furniture. 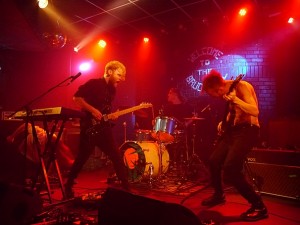 Back on stage, the sonic attack was huge, with washes of shoe-gazey guitar acting as solos and controlled feedback stabbing in the right places. Aidan was a blur, dashing off to stare out the other band members or, at the end, actually look quite threatening. 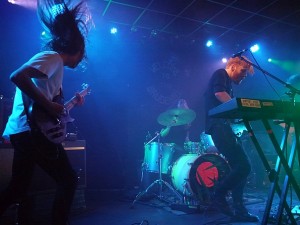 In thirty short minutes, their noisy mission was complete and the whole band was off the stage, in the crowd, leaping about as waves of sound continued to batter. This is a band that works it hard and isn’t afraid to let the snake god of rock and roll possess them. The spirit carries into the audience and shakes them hard. 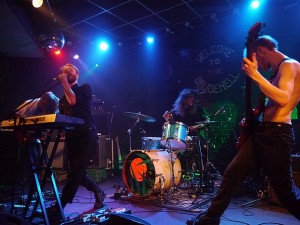 2017 saw their debut album: Swarmculture. If you can’t catch them live, you’ll find them there.