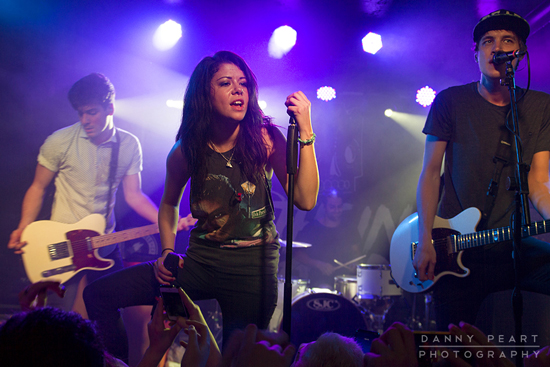 After going into hibernation to write a new full-length album, we are the in crowd are back on another UK tour and are ready to bring something different to the table. Having toured constantly for two and a half years off the back of debut album ‘best intentions’ it’s refreshing to see some new songs scribbled into the set list. But before We Are The In Crowd hit the stage, it’s down to the support acts to warm up the crowd.

Save your breath are tonight’s openers and struggle to get the early crowd moving. Neck deep on the other hand get the night started with a call for crowd surfers and circle pits, with a much more enthusiastic response from the room.  Lead singer Ben Barlow Is confidant and doesn’t struggle to maintain a stage presence throughout the set. New song ‘damsel in distress’ gets the crowd moving again but sounds the same to the majority of the set, which screams similarities to set your goals and New Found Glory.  ‘Growing pains’ pulls out the crowd surfers in full force again and the set comes to a close with the crowd pleasing ‘a part of me’ which bring something a little different with its acoustic riffs and catchy chorus.

After a short wait the impatient crowd gets excited as the lights drop. The Poughkeepsie quintet hit the stage to ‘The best thing,’ the new single from weird kids which kicks the room into full swing from the word go, with deafening screams all around.

Tonight’s venue is full from wall to wall, but had however been downgraded from the originally planned and much bigger Academy 2. Any other band might feel slightly deflated finding this out at last minute but We Are The In Crowd take it in their stride and pull out a more intimate show. Bassist mike ferry calls for a fan to get onstage to play base to ‘lights out’ after having asked for the past two years to do so. “If he’s joining us, then I’m joining you guys!” Whales ferry before stage diving into the crowd whilst taking a selfie for his Instagram as the room turns into complete mayhem.

When ferry finally finds his way back to the stage the band crack on with the set and pull out a solid performance of ‘Never Be What You Want’ Before playing a new song called ‘Windows In Heaven’ Which then creates a surprise for the band as 30 or so fans pull out banners with hearts on them all over the room.

An acoustic version of ‘For The Win’ follows to shake things up a little before teasing the crowd with some more now songs from ‘weird kids.’ Tay jardine takes a moment to thank the crowd for singing along so loudly through the set as she admits to struggling due to falling ill. It’s hardly noticeable however as the front woman confidently flies through the set bouncing around the stage.

The encore features a powerful performance of ‘Both Sides Of The Story,’ before finishing the night off with ‘Rumor Mill’ with a deafening reaction from the crowd. Jordan and Tay thank the crowd and hint about coming back again before the end of the year.

Tonight provides solid evidence that new album ‘weird kids’ has some corkers on it, and is likely to be the start of the next chapter of a new and developed we are the in crowd. Expect to see a lot more of these guys later this year.

Tags: featured Live manchester manchester academy review watic we are the in crowd