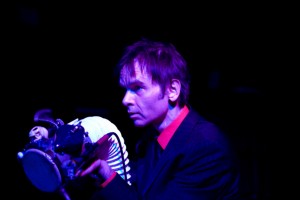 As dusk descends I buzz the intercom of Newcastle’s Neville Hall, a late 18th Century monument to the men, machines, grime and grit that, arguably, built this now industrially neglected Northern City. Without a word the door latch relay unlocks and I enter a musky hall, ascending the stairs. Tonight, Thomas Truax and his machines are visiting the Mining Institute Library. Lined with ancient engineering tomes, the dying blue glow of the outside world illuminates through stained glass windows, a long, wooden, balconied hall. Statues line the walls, dead souls from the age of steam keeping watch over the proceedings.

Truax announces that this is his “73rd time playing Newcastle!” This is possibly untrue but this is a liminal space; entering the world of Truax one must suspend all disbelief firmly on the coat peg where it belongs. He whispers that he is “slightly nervous” owing to the haunted building. As he clutches his beloved ‘hornicator’ instrument he asks “granny” if she’s there? A somewhat eerie squeak and moan echoes above our heads. It is not a human sound so clearly the ‘hornicator’ is channelling Granny, but how a hybrid of gramophone trumpet and wires can do this is anyone’s guess. According to disembodied Granny “a little bit of hornicator will soothe your spirits” and so, for tonight, I’m a believer.

Truax begins with ‘Prove it to my daughter’. Pointing at random audience members he sings of “praying mantis arms” while grabbing a spare microphone stand to demonstrate just what long insect arms resemble. Next we are introduced to ‘Mother Superior’, his drummer, “wearing a blue negligee”. It becomes apparent that Mother Superior is a customised, electrically powered bicycle wheel of delights replete with tambourine, symbols and small yet surprisingly effective drums. Thomas laments that the Mother doesn’t utter a word of encouragement to him during his gigs but “never shuts up in the car”.

After a brief chat to the crowd it’s time to meet ‘Hank’, Thomas’ shiny Washburn Resonator guitar for the title track from his new album ‘Jetstream Sunset’. Mother Superior is not behaving herself, “As technology develops you lose things and you gain things” he advises. The audience is fine with the technical hiccup. Thomas makes us feel like we’re all friends here. It’s that kind of gig.

Adjustments made, Mother Superior now on full tilt, we delve ‘Inside the Internet’, quickly followed by the campfire anthem “Full Moon over Wow Town”. Thomas makes a moon shape on the hall ceiling using some light emitting, guitar augmentation while wandering off into the audience up a spindly spiral staircase to finish the song on a balcony where Granny had been lurking previously.

‘I was a Teenage Post Punk’ follows and, like Thomas, I too had “Bauhaus for breakfast” and still do. Bauhaus is the breakfast of musical champions. No show is over until the ‘Fat Spider’ sings, so we continue from the new album for a stomping, triumphant ode to aerial wedding cake theft. Imagine that famous dangling scene from Mission Impossible, with less stealthy secret agent but more hungry arachnid and you get the picture.

Aware that the vision of one man and a guitar could, at the outer limits of possibility, make Thomas Truax look like a ‘ordinary’ performer, it’s time for a haunting rendition of ‘The Butterfly and the Entomologist’. Played with a battery powered fan held to his guitar strings, it’s an arresting ballad: “Men and violence are intertwined”, alas too true. Yet another machine enters stage left. This one is the ‘Back Beater’, a minimalist backpack with what appear to be radio aerials spinning on it. Pointing to the overlooking statues, Truax warns “The marble heads are laughing at me but I can fly with this thing…”. I don’t doubt him as he launches into a possessed version of ‘I put a spell on you’.

A guy in front of me shouts “I’m deranged”. It’s not an admission of his mental state but a request for the Eno/Bowie track from David Lynch’s film ‘Lost Highway’. As a bit of a Lynch obsessive I’m eager to hear this and although Thomas wonders if he can remember it, he complies with the request and I’m blown away by his vastly superior interpretation. I’m not alone; the audience are bewitched.

The final act commences with more sonic gadgetry. ‘You whistle while you sleep’ is accompanied by the ‘Stringaling’: a bongo drum come spin-dryer tube affixed with a variety of noise making strings and trinkets. ‘Beehive Heart’ involves dimming the lights, donning glowing, catherine wheel specs while leering menacingly at the front row.

Thomas Truax may not be for everyone but in a world of cookie cutter singer-songwriters and mechanically recovered vocoder pop, this guy is a true original; I certainly recommend you catch the man from Wow Town next time he’s round your way. 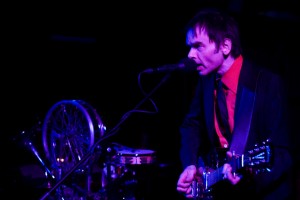 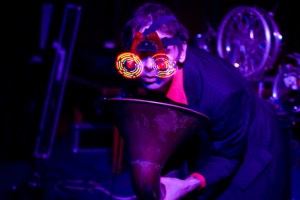