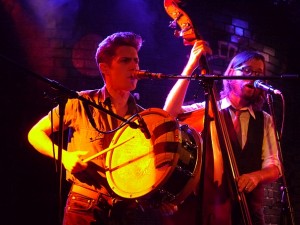 The Deslondes are the real thing; a set of connoisseurs of the musical traditions of the Southern US, maintaining and extending those traditions without tying themselves up in painfully exact authenticity. Warm and genuine, their evening was a gentle and loving journey through their passions. 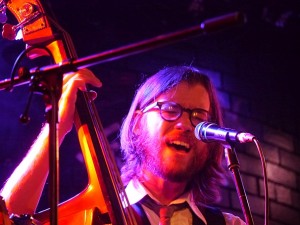 From New Orleans, The Deslondes are a motley bunch playing as if entertaining a crowd at a Louisiana dance. Presented all in a row, which I haven’t seen since the Yonder Mountain String Band, the band share lead roles and all take their turns. Drums are simple, with a kick drum and hand drum alone, the drummer moving between an intense and a distracted look. There’s an urbane double bass player, a red-neck looking singer, a troubadour and a focussed man on the pedal steel, electric guitar and violin. Staring with a slow ballad and gradually moving to faster pieces, the band start slow but warm to involving chats and stories, building to a sense of being charmed and entertained. The band, particularly the aforementioned redneck with a barbecue obsession, exude a welcoming affableness. 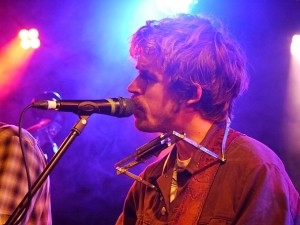 Music ranges through waltzes, country, two-steps and ballads. Pedal steel played a major part in flavouring the tunes but all the band played a part. They have some excellent original material and feature both their albums but the encores had me wanting more covers. Closing on JJ Cale’s A Drifter’s Life and Frankie Ford’s hit, Sea Cruise, they showed a love for all sorts of songs, particularly those that turn up in used record sales. Their playing, for now, tops their material, though many of their songs I’d remembered from a once through with the albums some time back. 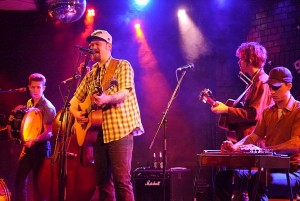 A natural and good-natured evening with a band that, live, inspire affection.