After a very successful tour in America, the 1975 kicked off their UK tour in their home town Manchester on Tuesday. Their first time at Manchester Arena with an amazing reception and response from a full room of fans.

The band are well known for their particular fashion sense so it was no surprised seeing them all dressed extremely formal with suits of different colours. They opened up with ‘the 1975’ best described as an instrumental taken from their latest album ‘I Like It When You Sleep, for You Are So Beautiful Yes So Unaware Of It.’

One of the first singles from their latest album ‘Love Me’ was the next to play to which the band entered the stage. Matthew Healy showed off his signature dance moves while jumping across the whole stage with his glass of red wine, proving he makes an exceptional frontman. His energy really rubbed off on the audience.

Halfway through the set Healy told the fans; “This is the best night ever, nothing compares to it.” The arena got an extra song to their usual set ‘Falling For You’. This wasn’t the only thing that stood out from this particular gig.

Healy went on to talk about Trump and Brexit. After the crowd booed at both of these mentions, Healy claimed he felt it was ‘so sad that so many young voices have been drowned out.’ He then went on to take a rainbow flag from a fan in the crowd and held it up in the air with ‘LOVING SOMEONE’ plastered on it.

One of the most beautiful things about this set and the 1975 themselves is how artistic they are. I have never been to a gig where the band have really put thought into how the stage is presented and looks. By using only projector screens and lights, they managed to put on an exceptional show visually.

During the encore, there was a quick outfit change to a bare chest and a leather jacket for Healy as they started to perform ‘Girls.’ The final song, one of their most popular was of course ‘The Sound’. If anyone in the crowd weren’t jumping before, they definitely were now. Healy went to both sides, including the middle, and made sure everyone was singing and dancing.

Whether a fan or not, everyone who attended was sure to have a fun time. There is no doubt that the 1975 are exceptional at what they do and know how to put on a successful show. 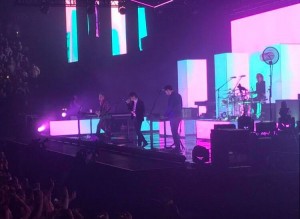 The 1975
Love Me
UGH!
Heart Out
A Change of Heart
An Encounter
Robbers
I Like It When You Sleep, for You Are So Beautiful Yet So Unaware of It
M.O.N.E.Y.
Undo
Milk
Loving Someone
She’s American
Please Be Naked
Lost my head
Somebody Else
falling for you
Paris
Girls
Sex
Encore:
Medicine
If I Believe You
Chocolate
The Sound