Tonight Taking Back Sunday are back in the UK ready to blow out a few sold out venues across the country with their energetic live shows and alternative rock anthems.

Kicking off the early sold out show tonight is Blitz Kids, who do well to pull in a crowd early as the doors open at 6.30 (due to a club night at the Ritz forcing forward the curfew) but it is clear that a 300 strong crowd are here for a good night from start to finish as the remaining crowd filter in throughout the night. An energetic Blitz kids take the stage and tear through a small strong set who look to have come in leaps and bounds since we last saw them at the Duchess in York earlier in the year.

Songs such as ‘On My Own’ and ‘Perfect’ show a matured band who are here to win over a few new fans and compete with the big bands. Guitarist Jono Yates takes a second to introduce the main support Marmozets: “Give it up to those noisy little bastards in Marmozets who are gonna make us look like s club 7, get your arseholes ready for a f***ing!”

He wasn’t far from right, when Marmozets hit the stage they take positions and drummer Josh Macintyre stands on top of his drum kit staring into the crowd waiting to literally jump straight into opening song ‘Born Young and Free’ which provides the first moment of the night which livens up the steady crowd ready for Taking Back Sunday. The heavy post-hardcore band fly across around the stage throughout the set creating an enthusiastic set built up from tracks from the recent debut album ‘The Weird and Wonderful Marmozets’ which has really turned a few heads late 2014.

Lead vocalist Becca Macintyre sounds fantastic live unlike many other heavier frontmen/women who find it tough to deliver the right notes and a sharp scream reflectively from the album.
‘Captivate You’creates a moment to calms things down temporarily to enable the band to catch a breath of air before firing into the next song with the steady build up pre chorus to a sing along chorus.

‘Move shake Hide’ provides one of the highlights of the set with a mosh pit kicking out mid song as the Leeds based Five piece look as tight as ever, expectedly so being built up from siblings of two family’s.

The set ends with a lightning pounding performance of vibetech as guitarist Sam Macintyre rolls around on the floor with his guitar screaming out the heavy sharp riffs, while Becca darts across the stage punching and kicking her way through the song shouting “Show me what you’ve got!”

Having seen Marmozets tear up small venues over the past year with energetic performances both on stage and in the crowd from time to time it was going to be interesting to see how they could transfer this into a bigger venue, but those who doubted them were left red faced as the Marmozets prove their worth. Onwards and upwards for the Marmozets.

Its been some time since we last saw Taking back Sunday live in the UK and it’s a welcome return tonight with open arms from a sold out Manchester crowd who have slowly filtered through the doors ready for a good rock show, but can Taking Back Sunday live up to the expectations they set themselves previously?

Kick off with the impressive ‘What’s it feel like to be a ghost’ it doesn’t seem like the band have lost their touch. Frontman Adam Lazzara ponders around the stage with the microphone singing at individual members of the crowd along the barrier, as he slides slick across the stage swinging his microphone around his arm and neck like a cowboy with a lasso, leaving the rest of the band hanging out across the back of the stage as the let the frontman take centre stage as he flies around like a charged up Duracell bunny throughout the set.

‘Liar’ gets people clapping, and singing loudly, proving the older songs still get the best reaction live.
Guitarist John Nolan takes front stage for a tapping screeching solo, as Adam steps back for some more mic swinging before ending the song with the crowd singing loudly “liar it takes one to know one!”

Touring of the back of the new album the set is full of both new and old songs to please everyone and provide some new moments for the core TBS fans. New songs such as ‘Better Homes and Gardens’ ‘Beat up Car’ and ‘Flicker, Fade’ provide opportunities for the New York rock band to prove they can still write catchy as hell tunes with big choruses and riffs to follow suit.

Mid set things start to liven up with a great crowd response for ‘Error: Operator’ leaving the crowd jumping and shouting back to the band “We can’t go back” with frontman Adam Lazzara. Penultimate song ‘Cute Without The E’ provides the loudest moment of the night with the deafening breakdown, before ‘Make Damn Sure’ ends the set on a high leaving the crowd with smiles all around.
Taking back Sunday aren’t really at the forefront of people’s minds anymore, but they should be. Tonight they demonstrated perfectly how to put on one hell of a show from start to finish. 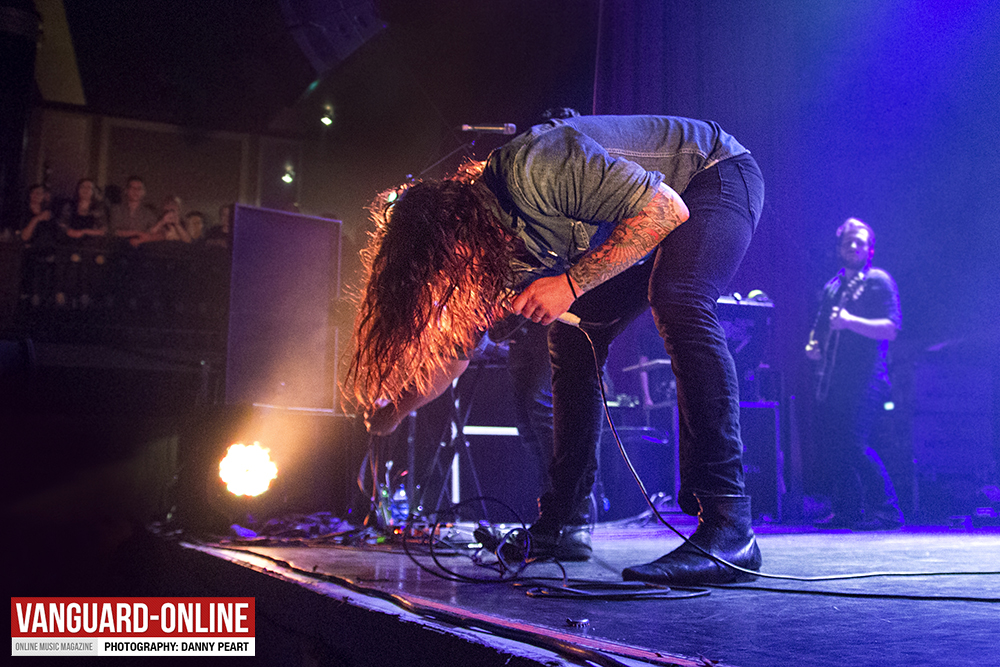