The support act doesn’t usually get a mention but when it’s John Cooper Clarke, then the headliners run the risk of being blown off the stage and Squeeze are commended for their bravery. 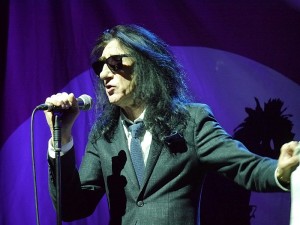 John, sorry, DOCTOR John, puts in a full hour’s set, mixing his usual recipe of: Half stand-up, half ancient jokes, half poems: Making a great 150% that spills out the side while, despite being sober and straight now, he talks non-stop, flying off into stream of consciousness adlibs, impressions from ancient movies and, at one point, a Rodgers and Hart song from a long forgotten musical. At times, brimming over with Jewish jokes and “my wife” jokes, like a skinny Bernard Manning, he launches into a skit about murder only being illegal because everyone wants to do it, hence drinking dog piss being tolerated. It serves as an intro to his antediluvian poem; Twat, and reminds us he does write poetry. 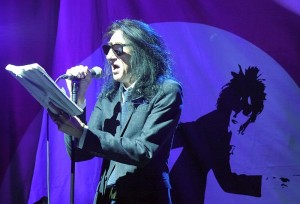 He wears his poems lightly, eruditely offering up the observation that “Oldham is to me as Macondo is to Gabriel Garcia Marquez”. “Trouble At T’Mall” is his contribution to the updating of Yorkshire’s past, while Beasley Boulevard updates his best-loved poem with what happens when a slum gets Hoxton-ified. In his drainpipes and shades, this is the same figure that motor-mouthed before punk luminaries a few decades ago, just older and a tiny touch more relaxed. His only regret is gaining a wee bit of weight, now attracting cries of “get back on the drugs, you fat c**t”. He’s a tough act to follow…. 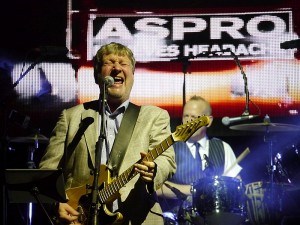 Squeeze do, of course, follow, with a packed couple of hours of showing off. Showing off partly the canon of radio favourites, partly Glenn Tillbrook’s Telecaster solos and partly their obvious pride in their return to form. In the late seventies, journalists had still not got over The Beatles and Difford and Tilbrook were frequently hailed as the new Lennon and McCartney. Whilst adept at telling the tales of everyday love and loss, the band were more storytellers than the Liverpudlians and it is the character songs that have lasted. These vignettes evoke recognisable lives and are exemplified by the closer to the set: Up The Junction – an amazing rush of images and events, an Alan Sillitoe novel in three minutes. Despite opening with a recent song, it is only moments before the hits start (Is That Love and Another Nail In My Heart), going on to make up a full half of the two hour set  – songs that have permeated the national consciousness over the last few decades. A lull in the middle signifies a few songs that hang between the first three or four albums and the new one by hooking less hard, though Some Fantastic Place has a touch of the old style.

When Chris Difford steps up to the mic to introduce Open from the new album, he is very proud and tells us it is their first top 20 album this century. Soundtracking Danny Baker’s TV semi-autobiography, the writing-to-order has inspired something like the old fire, songs like Only 15, Cradle To The Grave and Happy Days being stand-outs.  The set is nicely presented, in front of a video screen; at one point allowing us to see Chris and Glenn performing in front of their younger selves. They have a knowing introduction and exit announcer, winking at the conventions tonight of shifting some merchandise, being normal folks and acknowledging the distance travelled in years. A couple of crafty covers add colour – the ever wonderful I Don’t Wanna Grow up by Tom Waits and Tom T Hall’s Harper Valley PTA. 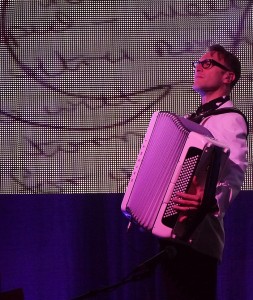 Throughout, Tilbrook pulls unexpected guitar solos from his Telecaster, gnarlier than you’d expect, while drumming is spot-on and keys are an entertaining swap from Wurlitzer to accordion to melodian. The band send everyone home happy with a blast through Tempted, Mussels From A Shell, Up The Junction, Cool For Cats and Take Me, I’m Yours. Beat that! 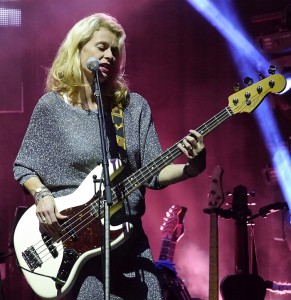 No-one expected any surprises and there were none, barring Tilbrooks enthusiasm for guitar solos, but the audience were very happy, everyone was reminded quite how many Squeeze songs they know and the return to form was thoroughly celebrated. 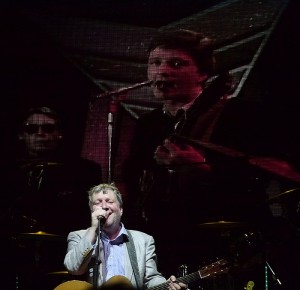 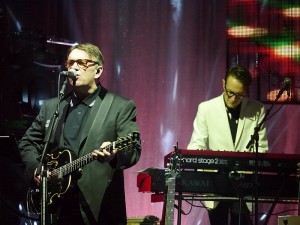 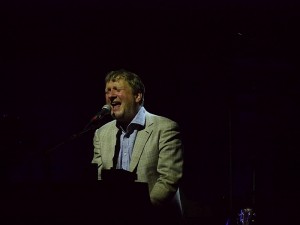 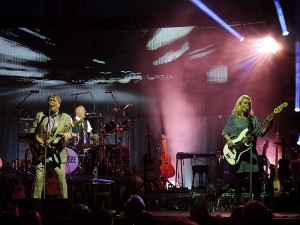 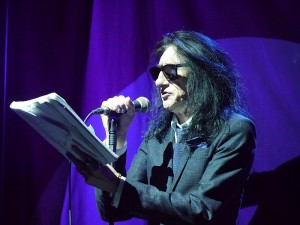