He’s a serious chap, Simone Felice, as befits a man all too familiar with brushes with death and recovering his health slowly. Skinny and bearded, he stares intensely, feeling as well as singing his songs; projecting them psychically. He chooses, tonight, to open with the wonderful One More American Song; “If I had a cinder block for every lie I told, I could of built us a house, fine as any city block, to keep us out of the cold”. A talented lyricist, I first heard him with the band that recorded this, his band, The Duke and The King, where harmony vocals, rolling bass and plenty of frills made for one of the sweetest experiences of the year. Tonight it is just his voice, his guitar and Anna Mitchell on keys and backing vocals. Despite his intense persona, the sparser treatment highlights the similarities in many of his basic tunes, however lovely and heartfelt they are. As Neil Young once said to a heckler who complained all his songs sounded the same, “it’s all one song”, but a spot more variety or flesh on the bones of the songs would be welcome. 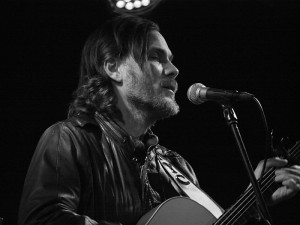 The songs contain remarkable imagery and phrases, Union Street touching on a sad school friend with an druggy mum. This, like many songs, has a sense of the beauty of desolation, the romanticism of escape, the longing to fly free, even on songs like Water Spider, ostensibly about, um, a spider. He introduces the album with a laconic tale about the arcane mystic creation of his new live album, a grin passing across his face. Later, he passes into a reverie as he relates an account of Gladys Knight sitting him on her knee to pet him on Jools Holland’s Later, all smelling of cinnamon. When he floats down to earth, he sings the lovely If You Ever Get Famous. 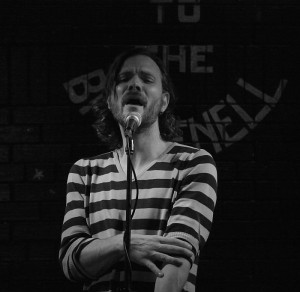 Local promoter, Hee Haw Sessions, are big fans and have made this the church of Simone tonight, seating people round tables in this social club, allowing quiet contemplation and focus. This allows concentration on the tumbling images of characters like Eddie Blackburn and his gold Range Rover, roaming over the desert. This is slow, serious art. A murder ballad reveals itself to be really a lament for the dead, Scarborough Fair is remodelled into If You Go To LA and the audience are roped in to attempt to turn The Morning I Get To Hell from a sweet swinger into a pirate chorus (not something that was ever going to succeed but Felice is gracious enough to pretend it has). 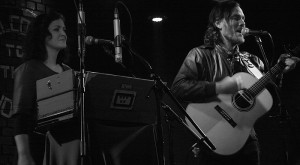 Anna Mitchell’s Irish vibrato is a remarkable instrument, almost Theremin-like at times, adding colour to the proceedings, as she plays the piano or squeezes the harmonium, which colours and darkens the songs. The main set ends with a song that out-Townes Mr Van Zandt, a ditty about heroin, prostitution, death and a bus station. It precedes the smart move of closing on a couple of covers – Wish You Were Here and Dylan’s I Shall Be Released. It has been a focused, lovely and slightly samey evening – one where Simone Felice is stroked by the attentions of a contemplative audience and responds by giving it all his focus. 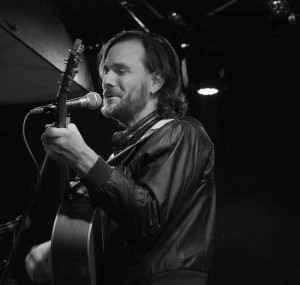 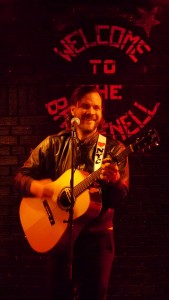