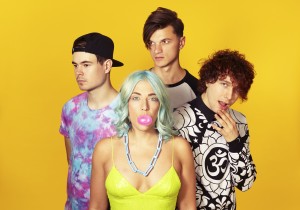 Scotland, famous to many for its iconic taste in fashion and questionable choices of national delicacies, has, in recent years, become a hub for some of the biggest and most inspiring bands who have taken the rock world by storm. Biffy Clyro are the current jewel in that crown, but their ranks are bursting with talent from the likes of legendary rockers Primal Scream, thoughtful indie wordsmiths Franz Ferdinand and festival favourites Twin Atlantic. And now, a new band may soon be adding their names to this esteemed list: punchy, vibrant rock quartet Vukovi.

Vukovi consists of frontwoman Janie Shilstone, guitarist Hamish Reilly, bassist Jason Trotter, and drummer Colin Irving. Despite in their name, -Vukovi, meaning ‘wolves’ in Serbian and Croatian- the foursome’s Glaswegian heritage and the passion for life that comes with it shines through in everything they create. The group formed in 2010, and have since exploded onto the local and national music scene, releasing five EPs in the intervening years along with two live performance releases. Gaining a steady stream of fans in the process, the band have since landed gigs at Download Festival, T in the Park and British Summer Time Festival in Hyde Park, among many others. Now the powerful rock quartet are finally releasing their self-titled debut album, and after such a long wait for their fans and the band themselves, it’s a good job that this album is an absolute firecracker!

Built on a solid foundation of punchy rock basslines and meaty, guitar laden choruses, ‘Vukovi’ is a masterclass in how to do classic, heavy rock justice without creating a dusty relic of a record. The fiery intensity behind Janie’s powerful vocals is almost tangible, and the sprinkling of screams across the record give it a post-hardcore touch that highlights the needle sharp peak of the tracks and deepens the shadows that follow in its wake. Yet there is a subtlety in this record too, with the allusions to electronica and dance inspired undertones that give the tracks a vibrancy and technicolour brilliance in-keeping with the album’s vivid artwork that cut through the heavy rock rhythms, pounding guitars and grunting basslines to create a sound that is as infectious and fun as it is powerful and insistent.

Yet for all its upbeat, soaring melodies, ‘Vukovi’ also has a darker element to its lyrics that may not be evident to the causal listener. Tracks such as the murky, potent ‘Prey’ deal with the darker side to relationships and emotional abuse and manipulation, while the subtext of the pain-filled, distressed ‘I’m Wired’, insists that the enemy is one much closer to home, and the gut-punching yet sorrowful lyrics explore the way in which maintaining a fruitful relationship can conflict with the strain of dealing with a mental illness, two subjects rarely talked about in tandem, but ones whose relationship is essential to explore, as so often the two conflicts intertwine.

In contrast to this, ‘Vukovi’ also has its fair share of roaring anthems that sound as though they are destined to be sung by a crowd of thousands. ‘Weirdo’ is the anthem all us women who grew up on the outside, never really fitting in have been craving- a wild, untamed celebration of individuality, while also being a massive middle finger up to those who look down on women for their self-expression and creativity. Similarly, the commanding call-to-arms that is ‘Animal’ serves as an excuse to completely free yourself of the inhibitions that hold us back and give in to the desire to jump around like… well, animals!

Simply the name of ‘Bouncy Castle’ says it all, as it is a bright, bubbly midway point to the album that reinvigorates the listener’s sense of vitality and joy in the bouncy melodies, and ‘And He Lost His Mind’ is incessantly giddy and intoxicatingly catchy, the undeniable sense of fun that gave rock music it’s lift off encapsulated in a single three-minute stint.

Frontwoman Janie’s vocals glide like a dream, weaving their way in and out of the fierce rhythms, not unlike the snake who features in their recently released music video for the album’s lead single ‘La Di Da’, whose concept was based on a manipulative relationship not unlike that of Harley Quinn and the Joker from the DC Comics universe. A self-confessed comic book nerd as a teenager, Janie highlights that “the song portrays an abusive relationship unbeknown to the victim. There are a lot of emotions throughout the song.

There’s vulnerability, and there’s resistance.’ And personally, those two words can, in a simplified sense, define the essence behind this explosive debut record: vulnerability flows from the lyrics, which take on tough themes ranging from depression and suicide to drug abuse and abusive relationships. And yet there is an overwhelming sense of resistance in these tracks too- uncompromisingly experimental and undeniably quirky, ‘Vukovi’ is not a record constrained by the limitations of genre, but rather a record that takes an eclectic mix of elements and whizzes them all together, creating a bubbly, passionate and daring project.
‘Vukovi’ is a record formed from pain and suffering, yet out of it, like a phoenix from the flames, Vukovi have created a debut which sparks up an ember in the stomach of its listeners, inspiring them to take the light which this quartet have pulled from the darkness and use it to banish their own demons that linger in the shadows of the fears and insecurities that linger within all of us. And that spark has the potential to grow that spark into a flame, which could soon become a blazing bonfire that nobody will be able to extinguish. Don’t sleep on this band: not that you’d be able to with the sound of the explosion they are about to make!

Get tickets for the tour here: http://www.vukovi.co.uk/live/