Savages are doing something that I’ve longed to happen for a long, long time. Fusing together raw energy, fierce female sexuality and a predilection for punk, the band play ferocious, passionate music which proclaim their love for life. The realities, frustrations and pleasures of life as a woman today, from stretch marks, sex and lust to all consuming-desire, pain and the deepest of hatred, are all part of it.

The London-based band are towards the end of their UK tour and I am eager to see how they’ve progressed since last seeing them in 2012. It’s my first time at Leeds Irish Centre; a venue which resembles a larger scale Brudenell Social Club but boasts a more generous capacity of 800. Luckily, I’m able catch the second half of support act Bo Ningen, a dynamic Japanese punk band drenched onstage in psychedelic purple lights. The band are charismatic, outlandish performers whose long black hair flays around them as they thrash out their final songs. Guitars are lifted, cradled and swung above their heads before the lights cut out and the crowd begin to cheer.

After a brief break, Savages dive head first into material from their 2013 album, Silence Yourself, which are wickedly unpredictable, fierce and tense in comparison to some of their later material from the debut album, Adore Life. Throughout ‘City’s Full’, bright white lights sweep under the feet of guitarist Gemma Thompson, glimmer off Fay Milton’s symbols and cast evocative shadows of Jehnny Beth’s sensual, masculine frame against the walls. This is why I’ve come. This is a band which are unequivocally, all-encompassing, female. What’s more, I am thrilled to see a number of the band’s crew are women, including the the lighting desk, a significant feature to each of the Savages electrifying live shows. 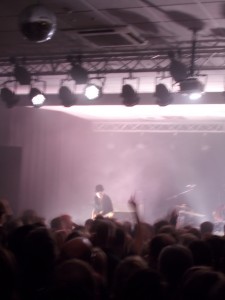 Ayse Hassan’s brooding basslines introduce ‘Husbands’ as Beth yelps, ‘I don’t know who he was he had no eyes, his presence made me feel ill at ease’, before screeching the chorus in unison with the pulsating crowd, ‘HUSBANDS HUSBANDS HUSBANDS’. Beth’s ability to jump from a performed mania in ‘Husbands’ to steady, stylish control in ‘She Will’ is a testament to her outstanding talent as a front woman and affirms her spine-tingling likeness to Karen O as she belts out the chorus, piercing her pointed forefinger assertively through the air.

I am in complete admiration and awe of Jehnny Beth’s presence by this point, but as ‘Evil’ begins and Beth moans, ‘I’ll squeeze your brain ‘til you forget, why is it you’re so afraid?’, she strides over to the edge of the stage and begins walking over a sea of males as they swarm beneath her to hold her weight…. 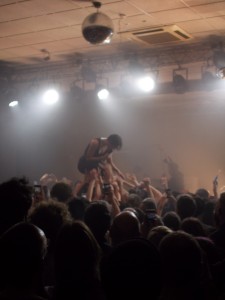 I cannot recommend seeing this band in the goose-bump covered flesh any more. Your last opportunity to see them in the UK is at the Roundhouse on 17th March 2016. Do it.