What’s not to love about Psychic TV. Massive chancers, playing the art game with a wink, churning out lots of crap and the odd shining star. I say that as someone who’s forked out cash to see them twice and will do again when the chance comes up. Blagging the heads of the music press and confusing the public – is this good or is it amateurish silliness? How can a band get by with such a bad singer? What’s this about “Thee Temple Ov Psychick Youth”? Sleeve notes talk about ritual and esotericism. Interviews drop names like Aleister Crowley and William Burroughs. Are they having a laugh? In my opinion – yes. But not in a bad way. Formed from a nucleus of notable weirdo, Genesis P. Orridge of Throbbing Gristle and Alternative TV’s Alex Ferguson, the band’s first couple of albums rode a post-Throbbing Gristle wave of curiosity, especially as there now seemed to be tunes as well as experiments. Roll on a year or three and alternative dance scenes appear, Rave, the nouveau hippies, New Age Travellers and Gen spots the opportunity for dropping a few beats in on his ideas. Cue these two albums, reissued.

The first, Allegory and Self, from 1988, was talked up at the time as some sort of rave thing, which was the usual arrant nonsense, aside from the odd track. Opening with the rather funny face-licking tribute to the Rolling Stones’ Brian Jones, Godstar; the band pushed its profile until it had multiple dance remixes. Later in the album we find the sequencer-programmed She Was Surprised, with snippets of Gen’s daughter, Caresse (also on the cover). Ever ones for using anything as an opportunity, they grabbed her naivety for effect. Much like the time Boots The Chemist called the police when they got naked bathtime snaps of her developed (yes, it was THAT long ago) and instead of keeping it quiet, the family pushed the story to the music press as some sort of Serge Gainsbourg taboo-breaking. Next, Caresse Song is pure indulgence, a girl, a drum machine, keyboard and her own little girl song – with lyric moments that remind me of her Dad’s wilful simplicity. Starlit Mire nicely breaks the mood with in your face intensity and Thee Dweller does the same with added wolf howl atmosphere. Add an 80’s dance instrumental, a simple boppy pop song and a melodic stream of consciousness semi-melodic ramble and you have this album of bits, collected by accretion more than design and resold to us. Good luck to them! 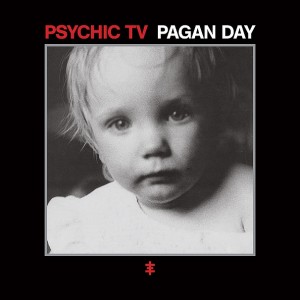 The partner reissue, Pagan Day, from 1984 is the chancier of the two albums. After two carefully assembled sets, this was to be a collection of demos and home recordings, some to resurface later in finished form. Much in the way that swathes of half-finished pap is now resold in mega box-set reissues, Gen and Alex justified this as a limited edition art project and insight into the creative process. Lots of cassette and four-track recordings come together here. 999 copies were made, it was available for only a few hours. The fans grabbed it up. That didn’t stop the band minting it in with further reissues of the limited set soon after….   There is something fragile here but also a sense of it not being ready to listen to and lacking the effects used to mask the less flattering aspects of Gen’s voice, which looms atonally here. Cheapo synths are played with one finger, sweet melodies emerge and are trampled by Gen, things are subtly off. An attempt is made on a slow Velvet Underground sound, a glockenspiel clonks, Gen reaches Cartman from South Park levels of vocal adroitness. Mysteriously a campfire-style rendition of As Tears Go By is appended as a bonus track. The boundaries being pushed here are those of quality control, yet the band remains childishly endearing in its lack of shame and willingness to show the raw side of their creative process.

There is a wilful disobedience and a trust in the hand of chance. A random idea or happening will become a song. Maybe it’ll be good, maybe it won’t, but Gen reckons you’ll want to hear it anyway. And if you don’t, your loss, he feels. Hence their only hit, Godstar, resulting from an onstage improvisation, hence the opposite end, a toddler laying with her Dad’s instruments gets equal weight in Gen’s artistic world.

Two reissues to sample or cherish, depending on how old you are. Either way, marvel at Genesis P. Orridge’s absolute refusal to be anyone other than who he is and do anything other than what he wants to do.