Slam Dunk Festival is finally just a couple of weeks away! It’s one of the first UK festivals of the year, and with its rapid growth and outdoor stages, its the perfect way to kick off the summer and party with your mates, thousands of music fans, and some of your favourite bands! Whats not to like right? Just in case your still not sold, here’s 10 acts not to be missed at this years Slam Dunk Festival!

Good Charlotte. What more do we need to say really? Since 1998 Good Charlotte have been pleasing our ears with their infectious pop punk & rock, and they are still going strong 20 years later! With such a solid back catalogue of hits, it’s sure to be one of the highlights of the day. Ensure you’re at the Jagermeister stage in good time for the headline set, as you prepare yourself for a blast from the past with the Maryland rockers!

If madness and chaos is what you’re looking for, then make sure you head over to the Jagermeister stage for Frank Carter and the Rattlesnakes. Expect to be put through the paces as Frank Carter and Co have you work off those summer beers with some moshing, crowd surfing and God knows what else as they tear through a set off punk rock bangers. These guys will undoubtedly be one of the highlights of the weekend so make sure you’re ready to get fully involved!

Every Time I Die

Every Time I Die are ferocious, powerful, charismatic and monsters of the Hardcore Punk scene. The veterans are without a doubt one of the most exciting bands throughout the weekend with an incredible amount of stage presence, notably from front man Keith Buckley who treats every stage as though it’s the biggest in the world, combined with a fast paced and gnarly sound, these are your weekend workout on the Impericon Stage as you will not be stood still throughout their set!

One band who you could be forgiven for forgetting about recently is Twin Atlantic. They have been hiding away for the past year working on brand new music following their successful run of their last album ‘GLA’. The Scottish rockers are sure to have a handful of smashing new tracks to drop at Slam Dunk Festival, as well as their monstrous hits such as ‘Make A Beast Of Myself’, ‘Free’, ‘Heart and Soul’, and many more. Twin Atlantic are without doubt one of the best live rock acts around, so you’re in for a treat. Expect an explosive return!

Taking Back Sunday are no strangers to the main stage at Slam Dunk Festival. Full of emo fuelled anthems and alternative rock these guys will take it in their stride effortlessly, making playing the Monster stage look incredibly easy to blow us all away. Last at Slam Dunk in 2015 they made quite the statement with their mainstage appearance, and they will be locked and loaded ready for another belter of a show!

After writing and recording a surprise release record in the form of Mesmer last year, Northlane Have been tearing through tours and festivals alike with their heavy and furious metalcore. Next up on their list is Slam Dunk Festival. Packed with a heavy hitting line up, Northlane will need to be on the top of their game to come out on top of the Impericon Stage, so expect a huge performance from the Aussie rockers!

It doesn’t seem like that long ago since PVRIS were the newbies at Slam Dunk Festival, but now they are a key act in this years line up. With their second album ‘All We Know Of Heaven, All We Need Of Hell, PVRIS have a set sure to take us on a roller-coaster of both emotional and furious rock over on the Jägermeister stage. Make sure you catch Lynn Gunn and co this year!

One of Slam Dunk Festivals potential new favourite bands for years to come could be Aussie trio Stand Atlantic. Playing their first ever festival, Stand Atlantic will bring their catchy EP ‘Sidewinder’ to the UK for a short and sweet set sure to have you bouncing along. Make sure you’re out nice and early in the afternoon to catch them on the Rocksound Breakthrough Stage! Interested to find out more? Check out our interview with Stand Atlantic here!

Amid the madness on the Jägermeister stage is Florida alternative rock suit Sleeping With Sirens. Formed in 2009, SWS have built a dedicated fan base through their emotional, authentic and raw music, and are bound to fill the Jägermeister stage with a chaotic crowd singing Kellin Quinn’s intimate lyrics right back at them. Expect a show full of fun, emotion and energy!

Earning the top spot aside Good Charlotte is the brilliant Jimmy Eat World! Formed in 1993 the American rockers have been smashing out big tunes for years. With a headline set on the Monster Energy Stage it’s going to be a fantastic set full of alternative rock to have us all bouncing and singing along to anthems such as ‘The Middle’, ‘Sweetness’, ‘Bleed American’ and many more!

You can see the full line up and stage split below! For more information regarding tickets, site maps, FAQs and everything else, visit Slam Dunk Festival’s official website HERE! 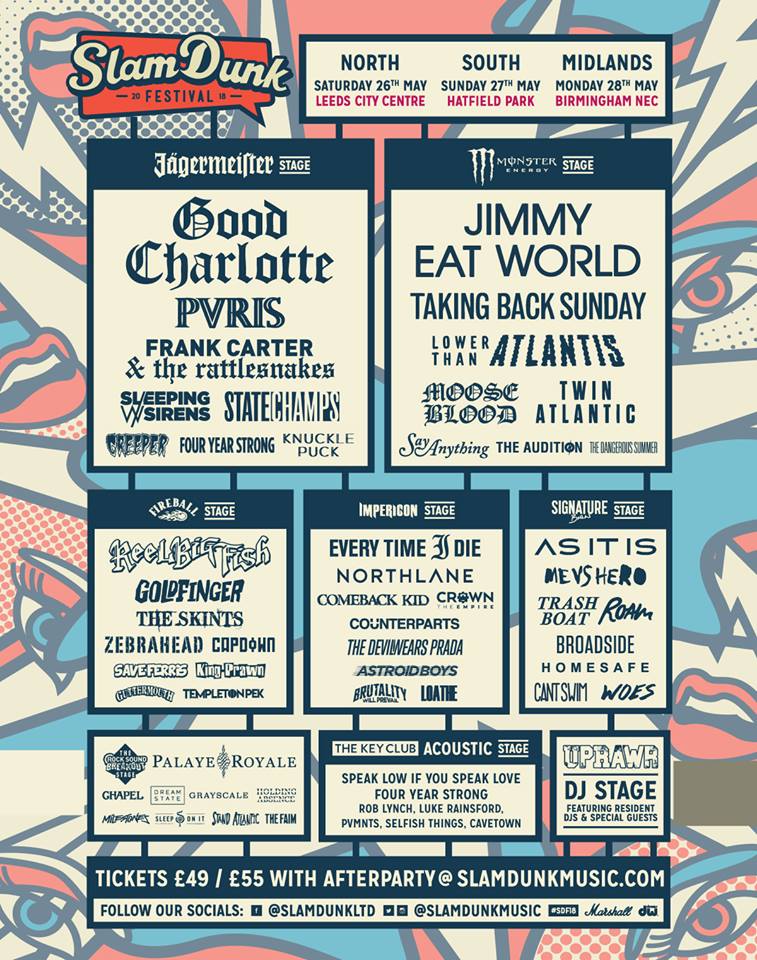