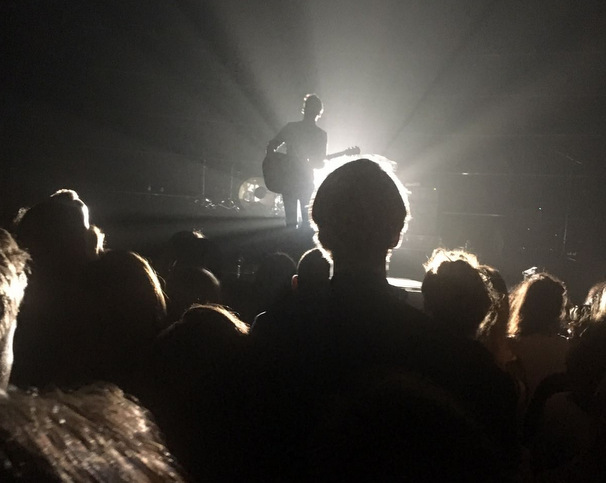 Passenger is Michael David Rosenberg. He’s moved on to a solo career but still keeps the name of his old band Passenger.

For almost a decade Rosenberg has been a one man show and that includes busking in street corners in the U.K. and Australia. For the first time in years Rosenberg is backed by a live five piece band. He played in Scotland, Wednesday the 7th of December, in the Usher Hall. Unfortunately he had to cancel Thursday, the 8th of December at the Barrowlands Ballroom, due to illness.

The band came on stage minus Rosenberg, to blue lighting and bright white lights. It was very angelic. Instrumental music was played. Then Rosenberg entered to massive cheers. You could feel the energy as the instrumental merged into the first song of the night ‘Somebody’s Love’. Rosenberg’s voice was impeccable, he has his own unique voice, if you hear one of his songs on the radio right away you know it’s him.

At the end of the first song Rosenberg took a drink out of a mug. “I fucking love this town and I love this venue” he said. He teased the crowd with his sarcasm. Talking about his latest album, which was released a few months ago he said, “it’s fucking dreadful….hopefully not… and with your help we got it to number one so fucking thank you so so much. We won’t be playing any songs off that album (laughing)! No! We will! And I will also play some old ones as well. Any of you that have been coming for a while this one is called Life’s For The Living. Please sing it”. ‘Life’s For Living’ is a song about living in the moment no matter how difficult it is at times.

Rosenberg introduced ‘Twenty Seven’, “Before we go too much further tonight I only really have one hit single” he said with his hands clasped on each other on top of his guitar, “It’s true. I went travelling all over the world, some beautiful parts of the world, but I would also really have some depressing moments and I found myself in a hostel or a travel lodge somewhere and I’d think why the fuck am I doing this? Why am I travelling around the world playing my song and bullying people to buying my CDs? And I wrote this next one just to remind myself just to cheer myself up that I didn’t get into playing music because I wanted to be famous or successful I did it because I had something to say and I wanted to connect with people. I wanna sing this next song to any of you guys who are doing something, either it be music or acting or sport, whatever it is. If you are doing it with passion and if it’s taking a long time and your fucking fed up and your frustrated and u think it’s never gonny happen, hang in there, it will! Keep focused! This song is for you! Let me see you moving to this! Everyone come on!”

With another drink from his mug he chatted away, “Some of you who have been coming for a long time now” (there were a few cheers from the crowd) “all sixteen of you!” he laughed. “You will be thinking nowadays we are really strived towards becoming famous and having loads of money and having this weird Instagram existence and at the bottom of it all it makes us all feel really fucking deeply miserable. I don’t know who else feels that way but recently I came to the conclusion it’s really obvious what’s important. It’s people that you love this song is for that it’s called Everything.”

Michael passion for what’s right and what’s wrong came out in his ‘time outs’ with the crowd. You weren’t just seeing a live concert. You were getting talks on life’s lessons both through the songs and his humorous conversation. He’s such a special and decent human being.

He told us, “This whole live band thing is new to me. I’ve been playing solo for many years so if it’s ok I’m gonny play a few songs on my own.” The band walked off stage.The audience went silent, and he sang Simon and Garfunkel’s ‘Sound Of Silence’, which was much better than the Disturbed version. You could have herd a pin drop. He had a great moment with his guitar in this and kept picking the speed up over and over. Bright white lights were flashing, keeping up with the pace.

In between his encore the crowd all sang together humming his tunes, and he came back on and sang ‘Home’. All the fans held their phone lights aloft, gone are the days when you sparked your hazardous lighter up.

When he sang ‘Let Her Go’ the place was on another level. He encouraged the crowd to join in which of course we did.

I personally loved the catchy guitar tunes on ‘Young As The Morning, Old As The Sea’ and the beautiful breaks in the sound of this song.

Most of the room were singing along to ‘I Hate’. This is a song he wrote in a bad mood about all the stuff that annoys him. It’s a lighthearted track in a heavy album. He sings about how he’s not depressed, he’s a happy guy most of the time, but he takes digs at X factor, Facebook, fussy eaters and festival toilets. It’s basically harmless piss taking. He wrote this song on a bus in Australia where it was very hot and he was very uncomfortable with babies all around him crying. Figures huh?

He took another sip from his mug and sang ‘Ain’t No Sunshine’. The crowd started to clap. I love this song it’s an all time favourite of mine and to hear one of the best vocal singers singing it, was such a delight.

Michael was the perfect host to his supporters. He kept spinning round dancing with his guitar and egging the crowd on. He knew how to make use of the stage and show off his energy. He was always getting the crowd to sing along and showing us a thumbs-up. At one point he asked if people were enjoying themselves. After the screams he was like “that would have been awkward if you said no”. With all his heart, punching while playing and singing, this guy oozed passion and talent, which is exactly what’s needed of an amazing guitar playing vocalist and songwriter. He finished his show by shouting out to us “This year is for the loving! Thank you very much Edinburgh and goodnight.”

What an absolute shame for the Glasgow fans that he was unwell for their show. I would never have known he was ill though from how he performed on stage. Bless you Rosenberg and Get Well Soon.