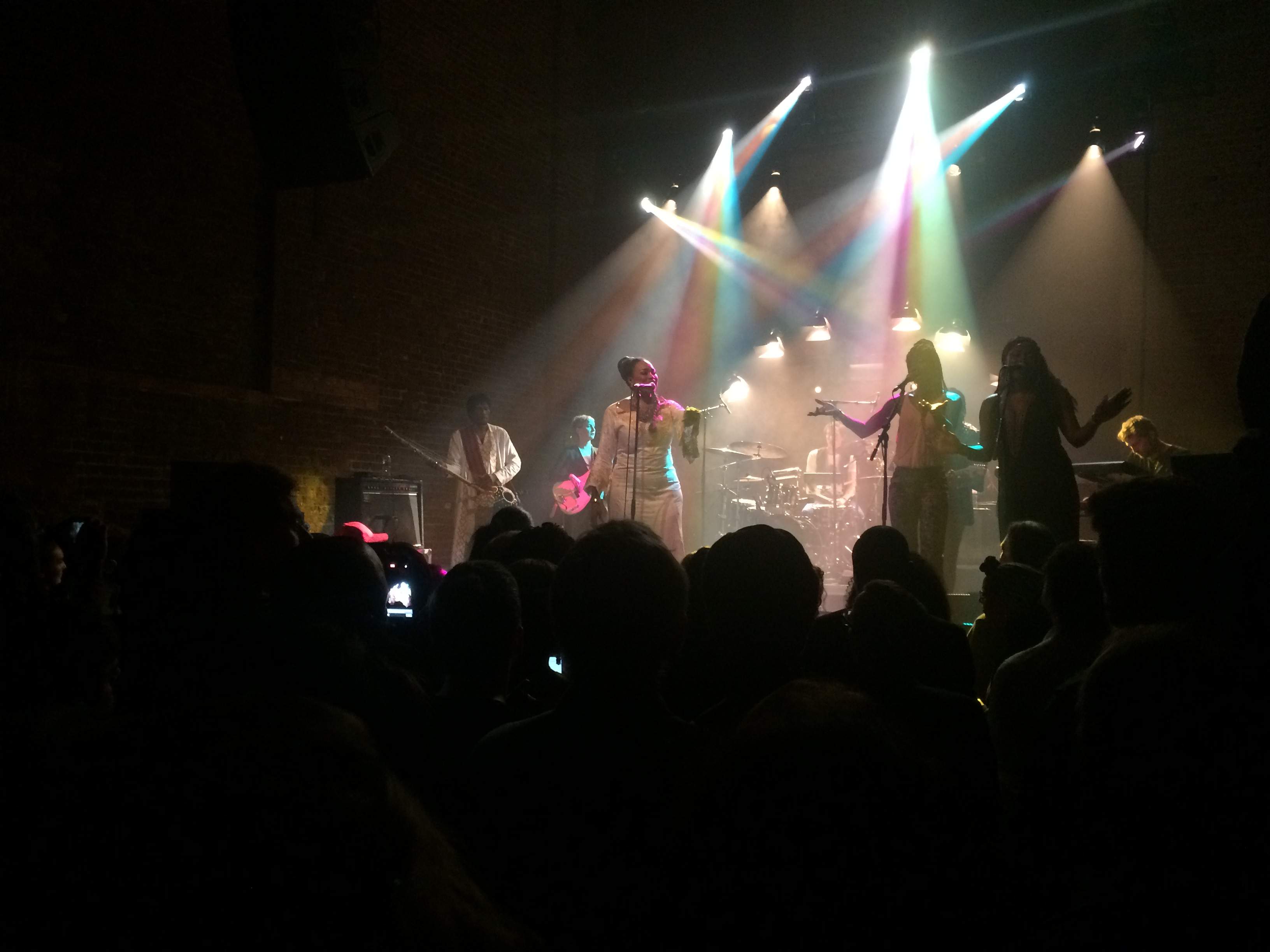 I was looking forward to seeing a bit of world music in Shoreditch. I wasn’t sure what kind of audience Malian, Oumou Sangaré would draw to the old cavernous brick warehouse, an isolated segment of railway viaduct, that is Village Underground. Shoreditch is the land of the hipster, new bands from rock and pop, and DJs who like to add mad sounds to 80s classics. The audience, it turned out, was a picture of studied focus and appreciation, Black and White faces in equal number, or at least more Black faces than I usually see at the gigs I go to.

I know some people hate the term world music, but Sangaré and her band fit neatly into the category. I know to a Malian, the music of Oumou Sangaré might seem a million miles away from the music of a Kurdish folk band, but what unites a lot of world music, apart from the fact that you can’t understand the lyrics, and its not rock or pop, is big thumping drums, a rhythm that makes you want to dance but that also puts you into a trance, and singing which runs, eddies and sometimes murmurs, like water through a valley. Listening to world music then, and listening to Sangaré is like running your finger along the entire length of a three mile wall, and kind of enjoying it. My view is that its music for dancing to rather than listening to, especially when you don’t understand the lyrics. However Village Underground is not a discotheque and there were too many people in the venue to dance expressively. It made me wonder what a  Sangaré concert would be like in Mali.

But in reality this wasn’t just Oumou Sangaré, Sangaré had bought a band with her. And as James Maclaren explained in his recent album review Sangaré has moved labels, from the safe pair of hands of World Circuit (read: musically conservative but never less than total quality) to Parisian upstart label No Format. No Format, I imagine, have worked with Sangaré to fashion a new sound, and may have played some part in putting together the band. On the night there was an N’Goni harp player, a slim and shy looking fella from Mali, dressed in a white robe, who tended to stand the side of the stage, as if he was secretly hoping that the intensity of his playing might be enough to teleport him back to Mali. There were two supporting singers, one from Burkina Faso and the other from South Africa. There was a guitar player, also an African. And then towards the back of the stage there were three white musicians, one of whom for sure, and all of whom perhaps were from Paris, a bassist, a drummer and keyboard player.

The sound they created when they opened up was something akin to the beginning of the Stone Roses second album The Second Coming. A cacophony, a bit like an orchestra warming up, but it worked, and it promised ever so much. The big rolling and tripping African beats soon took hold and the rest of the night was a continuous drive up world music route 66, Sangaré’s deeper female tones and proclamations, complimented by the more girly, silky sounds of the backing singers. Occasionally, there would be a country twang to the music, the ghost of Sufjan Stevens could occasionally be seen floating over proceedings. Sometimes it would get a bit funky and on one occasion it almost went a bit Josh Wink.

Having said that there were no major music detours, nothing to make this music stand out in the eye of a mind addled by western rock and pop. There were occasional guitar solos, hammond organ solos which blew me away, and an impressive Ngoni harp solo played in some parts with the help of teeth. Jimi Hendrix eat your Ngoni harp out! Towards the end of the show when the band started to freestyle, the two supporting singers had a few minutes to show their own wares, and my word were they impressive so much so that you kind of felt it might have been worth making a bit more use of them in the show.

A big part of the show is Sangaré herself, she seemed to show more and more or herself as the night progressed, by the end she had become compere and story teller as much as singer. The interesting thing about Sangaré, which kind of flies in the face of the stereotype of world music, is that for the first two-thirds of the night, she invariably sang with a look on her face that moved between severe and pained. No matter that very few people could understand the language she was singing in, she was clearly not here to just throw a party, there was stuff she needed to get off her chest. She’d point at the audience, as if casting them in the roll of the villain she was singing of, slice her hand down, hold the palm of her hand out to stop us and then wag her finger, and in one song she kept drawing her finger across her neck. You felt that if she had a husband and children, they more than likely knew their place in the home.

Sangaré is not afraid of lecturing and of sharing her suffering. She spoke about how the white man’s colonisation of Mali had taken away their identity. She talked about how things in Mali were not good but that she and others like her would fight to the last minute. One of her songs seemed to her addressing the ‘state of the nation’. Sangaré said these things, but she said most of them in French (occasionally breaking out into English) which amused me for some reason given Britain’s reluctance to learn foreign languages. Being lectured to in French about white colonialism wasn’t the kind of gig that post-Brexit Britain had voted for, I imagined. How would this have gone down in the backroom of a pub in Dagenham I thought? Cross-cultural communication can be uncomfortable. At one point she introduced a song as being about Mali and then shouted at ‘Do you know Mali?’ Many I imagine knew nothing of Mali, but everyone wished they did just to make that moment a happy one. Most of the audience didn’t understand French, did Sangaré know that? Did she care? Sangaré chided a member of the audience, half-jokingly, for laughing at her English and threatened to say nothing more in English if there was any more mirth. ‘Do you speak Bambara?’ she asked, pumping her chest out, to which everyone cheered. But had anyone really laughed at Sangaré’s English? Was this paranoia on her part? Or was this all just theatre?

The audience responded well to Sangaré. I got the impression that Malians in the audience and tuned in others had come with the expressed purpose of sharing a spiritual communion with Sangaré and others who shared the singer’s concerns; there were enough white women in their fifties with short bleached hair for me to think that there must be at least one Gender Studies lecturer in the audience. With about twenty minutes to go, and after a sad and funereal song dedicated to a boy who had lost his mother, Sangaré and band changed tact and switched into party mode and went into a funk jam. The audience responded, albeit gently. Londoners generally are infamous for not dancing and with the exception of the person standing in front of me, there was not a single member of the audience who decided to loose themselves to the music during the night. Nevertheless with the spirit of the place lifted, there were smiles all around, and jigs a plenty. Sangaré went on to introduce each member of the band, and as already mentioned, everyone got their turn to do a solo. The highlight for me was seeing the smile which broke out on to the face of the Ngoni harp player, as he took centre stage with the guitarist. Although smaller than the guitar player he managed to play his harp and jump up and down and ruffle the hair of the guitarist all at the same time. The guitarist looked across to his contemporary looking a little uncertain as to whether this kind of thing ought to be going on on-stage, but he was too focused on getting his chords right to be able to formulate an opinion.