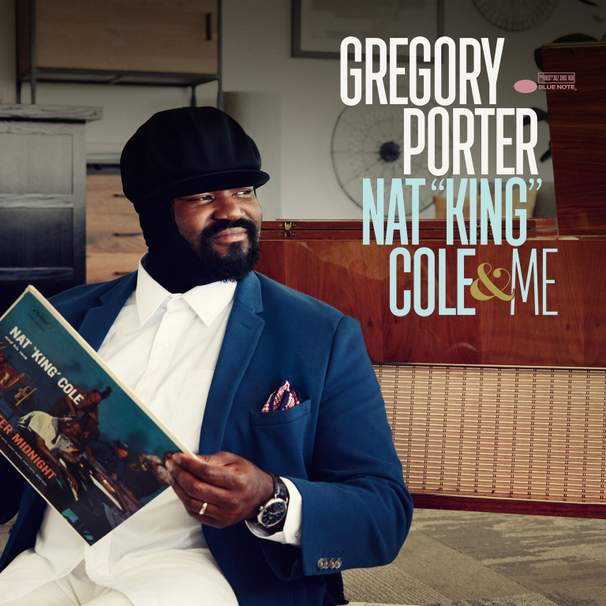 Gregory Porter does what he says and sings the songs of Nat King Cole. And wow, what a rich voice he has, a voice that is perfectly set against an orchestral arrangement of strings and woodwind. This album would make the perfect accompaniment to a dreamy Christmas stroll through your favourite department store or a late night sit down with your loved one watching the snowflakes fall outside. There is in fact a Christmas number at the end of the album which is incongruous with the otherwise non-festive content, but it serves to strengthen my point and perhaps a marketing man with an eye on a late October release had a hand in the idea.

Porter has a crystal clear voice. It’s not like Cole’s though. Listening to this album sent me on a study of Cole’s voice. Cole had an incredible voice, it was a fatherly voice, a grandfatherly voice, with all kinds of emotional inflections in it, and most of them warm and relaxing. I think Porter is more smooth and ethereal, even beautiful. As someone new to the phenomenon of Gregory Porter – and maybe you are too – I can’t help comment on the fact that Porter’s voice is incongruous with his public image. A cursory glance shows Porter’s slightly chubby and child like face beaming from underneath a black cap, complete with black elastic arrangement stuck to it, which covers his neck and head. I’ve heard different reasons for why Porter wears this head-wear but whatever the reason of the eccentricity of the garb, which reminds me of the kind of thing a seasoned homeless man might wear in winter, it made me think I was going to get some kind of gruff smokey vocal, and perhaps something a bit offbeat that didn’t really work, like, uh, the hat arrangement there.

I really wasn’t expecting the classical voice that Porter has. And even once I’d heard his voice I still couldn’t imagine watching him pull off the classical timeless crooner. Several YouTube videos later and I realised that, uh, dressed in an orange velvet jacket, a frilled pink shirt and a dicky bow, he does pull it off. More than that, he has crafted a kind of persona that is very much his own. He’s not some kind of middle of the road clean shaven sharp dressing crooner, he’s not Harry Connick Jr, and um, there’s no way he’s trying to be the twenty-first century’s answer to Nat King Cole. And perhaps more than his foppish ways is the level of sincerity inscribed on his face when he sings, and the fact that you feel that the sincerity is underpinned by contentment, the contentment of a man who knows he’s at the top of his game and who loves what he does, which when combined with that voice dissolves any doubt in your mind that this guy is the real deal. His sincerity and character radiates as he sings, he brings warmth and sunshine into the room, and I believe people warm to this as much as they do to the music. You feel it on the album too: Porter’s happiness and contentment infuses his music, it’s a cosy affair, just like listening to Cole. ‘Nat King Cole & Me’ is a crystal clear sound, it runs at a very smooth pace, and frankly if you’re looking for a ‘low risk’ Christmas present this would be my number one.

‘Nat King Cole & Me’, will be released on Decca/Blue Note on 27th October