A new My Morning Jacket album is like stepping off a long plane journey to a strange place. At first it is a bit puzzling. You’ve been looking forward to it but on arrival it isn’t quite what you expected and you don’t feel at ease. Relax. Take some time and don’t worry. It will slowly open up to you and leave lasting memories. A few listens and the album becomes imprinted on your DNA.

The Waterfall opens up with Believe and could almost pass for The Polyphonic Spree (remember them?). On repeated listening the song becomes a psychedelic rock song, raising energy and utterly not preparing you for the surprise of Compound Fracture, where Jim Jones slips into his falsetto for some plastic soul, dressed in some nice eighties flourishes. Like A River is falsetto too, a pastoral hymn in a soulful nu-folk style that drops into a nice little groove.

For a band commonly associated with country rock, jam-band wig-outs and psychedelic leanings, they don’t half wander off track and bless ‘em for doing it. Taking their own sweet time, you can expect a My Morning Jacket album every few years and, along with it, discussion amongst the fans on whether they have lost the plot this time. A band that inspires devotion, they carry a healthy load of critics and that happy breed that always say the band is far better live. Which they are. With gigs mashing up styles and lasting hours, each is a bit of a journey. Luckily there is a live set, Okonos, to sample but I wouldn’t kick this studio set out of bed. 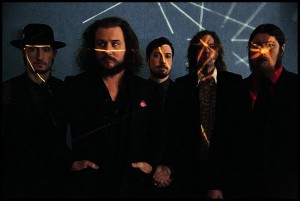 In Its Infancy (The Waterfall) is nicely pretentious to start with, before turning into a sweet pop song. It hops back and forth in styles, at time a prog epic, at others a late period Beach Boys. The overall effect is winning. Mr Jones is generally a happy chap and there is a mystical tone to many of the songs. Get The Point is a loving break-up song and sounds like something Harry Neilson would have written in the early seventies. The pedal steel takes it into classic territory. Spring, however, jitters between sequencer-driven sections and pounding beats in a multi-layered construction. Thin Line is warm and enveloping, Jim Jones swaddled in steel guitar and layers of sound as he delivers something between country, pop and soul, uniquely MMJ, as he sings “it’s a thin line between loving and wasting my time”. Big Decisions is another song that suggests our Jim has had a break-up recently, angrily pumping out his frustration while still cocooning us in MMJ sonic cotton wool. Most of the album, like other recent work is carefully built in deep layers, making the closer, Only Memories Remain apt and memorable. It showcases the band almost (musically) naked, sounding very much like a live-in-a-room recording, at times practically a Percy Sledge organ soul drifter, floating along in a wistful and reflective way, at other times carrying a country twang.

This is another remarkable, surprising and yet somehow familiar set of songs, the whole a cradling experience in the worldview and rich sound of My Morning Jacket.