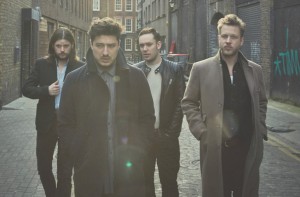 For a band that seems so suited to playing arenas, fans of Mumford & Sons may be wondering how their latest album, Wilder Mind, translates to the big venues compared to their previous, more rousing offerings. Tonight, the band opens with the frantic Snake Eyes, before launching into the joyful I Will Wait from 2012’s Babel.

Mumford & Sons have the rare ability to make a crowd of this magnitude seem utterly unified, whether they’re playing tracks from the more subdued Wilder Mind or festival favourites such as The Cave for which they’ve become so widely known. The band moves seamlessly from banjo-infused hits such as Roll Away Your Stone from debut album Sigh No More to moodier new song Tompkins Square Park.

While the band’s previous material sounds tailor made for festival crowds, their new album sounds more suited to driving late at night, with the isolation and introspection that entails. When played live, however, the results are just as satisfying. Marcus Mumford runs through the crowd at one point, to the delight of the entire arena, while later on the band encourages everyone to raise their mobile phone torches, turning the Hydro into a glittering galaxy of stars.

The set finishes with signature song Little Lion Man and new song The Wolf, proving that Mumford & Sons are moving forward artistically while not forgetting their folk roots.