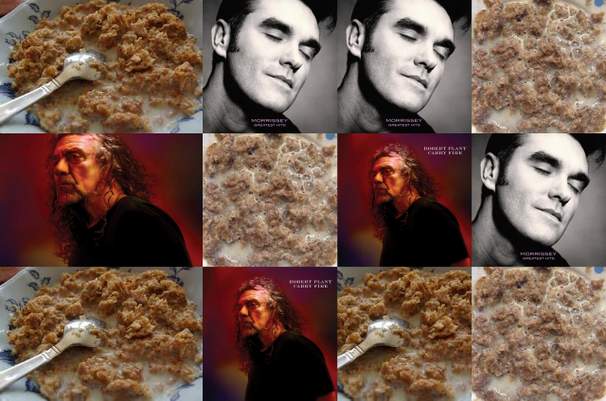 What is it about musicians as they get older?

They tend to loose any interest or ability to be at the vanguard, instrumentally speaking.

The instrumentation becomes a kind of mush. Its pleasant enough, in the way that sugary milk-logged Weetabix is pleasant to a seven year old.

But the singing get lost in the instrumentation.

Take Morrissey for example. Musically, Morrissey on his latest album ‘Low at High School’ seems to be gently wandering into a forest full of progressive rock riffs and Ultravox style keyboards. You can imagine him looking up at the trees, down at the flowers, smiling smugly to himself as he sings of things of infinite interest to himself but not to others. He may as well be talking to himself, but, heh, why not get some session musicians to put it to music, and with the brand image and good marketing, you could make a few bob.

The progressive rock sound of Morrissey is a pottering around with instruments, a more structured level up from listening to a wind chime. Its vague music. Perhaps its therefore a nice compliment to Morrissey’s musings. Morrissey I would imagine can pay the most accomplished session musicians to put their talents to producing any kind of sound. Morrissey goes all over the place from a grungey Pixies sound, to a kind of light tango affair on ‘The Girl from Tel Aviv Who Wouldn’t Kneel’. Israel is sung with the same level of ethereal beauty as Frankie Goes to Hollywood sings ‘The Power of Love’. Its pic n mix prog rock.

On Morrissey’s album there’s a whiff of Mike Oldfield in the air. Ageing rock stars have a lot to thank Mike Oldfield for, they lean back on Oldfield, they use him as a walking stick.

Now lets look at Robert Plant in his latest album ‘Carry Fire’. The music is progressive rock. The general emotion is warming, the title suggests this. Its a wandering album, the music takes on Celtic and Turkish influences. It falls into the orbit of 1980s pop at points, I’m thinking Aztec Camera, Then Jericho and The Joshua Tree and there are moments when it verges on the jangly indie guitar music of Adorable. There’s also bluegrass, country and at one point I’m hearing Roy Orbison. All the time Plant is cooing and singing softly, singing to someone or about someone or thinking about someone. His voice is deliberately intertwined into the music, it gets lost and then found, fades in and out, the memory of the album is like a dream that one remembers the sense but not the detail of.

In both Morrissey and Plant’s albums you can pick up a range of influences, sure they are eclectic, but the influences are delicate, perhaps a better term would be weak. The albums, singers and musicians are not committing themselves to a style, instead they are hedging their bets, its like a tepid musical populism, where all the passion for anything is drained out of the music, like listening to an elevator light jazz version of Nirvana, or the Foo Fighters.