Never the most prolific of bands, Mercury Rev took 3 years to follow up Deserter’s Songs, the album that saved their career, with All Is Dream and 5 to follow that up. They topped that with an 7 year wait for The Light In You, which they are touring to promote. In the press they’ve done, they have talked about how much they enjoyed touring again last year, playing Deserter’s Songs and feeling inspired to mine a similar vein on the new one. Which they did but, missing the bells and frills of Dave Fridmann, ended up with something different – which counts for nothing here tonight, where all the songs must stand alone, played by a five piece band. The result is something different – all the songs made anew by being lifted out of a very rarified atmosphere into a noisy rock gig. 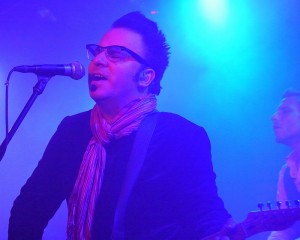 It works by dint of avoiding comparison and by the pure affection felt for the breakthrough albums.  This is one of those gigs where plenty of folk have their eyes closed, singing along and waving their arms in the air. It doesn’t hurt that Jonathan Donahue is a charismatic performer. Bug-eyed and grinning in a way ordinary mortals take psilocybin to achieve, Jonathan flaps his arms, points, holds poses and personifies the sense of wonder his songs often express.  You know; sunrises, rain, butterfies and holding hands. 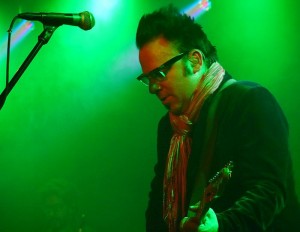 Grasshopper is wrapped warm, tucked tortoise-like in jacket and scarf, concentrating hard on his guitar. He appears stolid but is focussed on heartfelt guitar lines, accentuated with tremolo, slide effects and creative use of a can of orange pop – doubled up when Jonathan picks up a guitar to take some of the strain. Fridmann’s role in the band is filled by keyboards, effects and clarinet, whilst the bass is fine but really comes alive only on the older material where jams speed up and become burbling monsters. 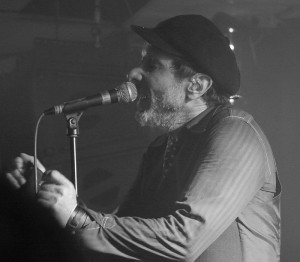 The set, as you’d expect, is half a dozen new songs (blending very nicely with the old), half a dozen from Deserter’s Songs, a couple from All Is Dream and a few older ones. The Yerself Is Steam tracks develop satisfyingly into psychedelic wig-outs, as do a couple of newer ones. A Sparklehorse cover reminds us of the sad end of Mark Linkous. The mix works well, all songs later than Deserter’s carrying the same line of wide-eyed astonishment, with simpler arrangements than the studio arrangements, dressed up with Grasshopper’s controlled guitar. The warmth of the crowd for the band make for an atmospheric evening and a rewarding one for Donahue. 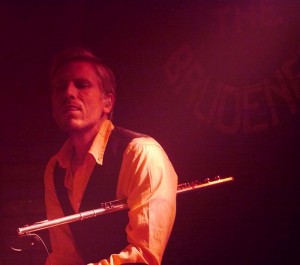 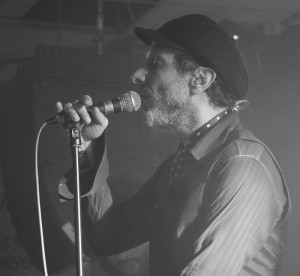