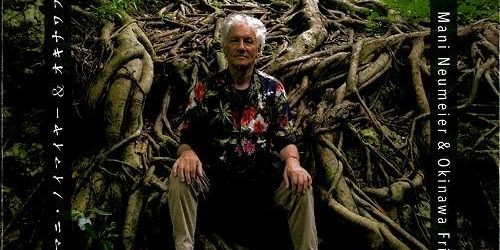 Mani Neumeier fronts the long-lasting proto-hippy German band, Guru Guru. With fifty years under their belt, a studio album last year and a live album this year, Mani is a busy man, releasing this side-project at the same time. He’s nearly eighty now but sees no reason to stop. Together with some other musicians he has assembled a relaxing record of improvisational jams that drifts and sways on the whims of the participants. As a drummer, there’s no surprise that percussion takes the lead throughout.

The opening and closing sections are a really nice collection of rhythmic percussion played largely on coral. Often apparently purposeless rattles, taps, click and drums move along pleasantly in a very relaxing way. At times it resembles the exploratory passages of a Grateful Dead concert, where scratchy sonic wanderings would warp the minds of tripping Heads. In the middle sections of the album guitars, drums and bass are more what a rock audience would expect, but still played in jazzy improvisations with two guitars – one left, one right and the same set up for the two basses, lending a mind-altering quality to those still using stereo speakers or headphones.

Things jam along, massaging the brain through the main section of the album until three tracks from the end where it goes back to the seaside percussion. At other times it could be someone playing along to a set of wind chimes or the free weirdness of David Toop. It makes me think of a breezy warm alpine day with the sound of cowbells somewhere in the distance. Bass sounds burble in sometimes, as does guitar, or a gong might reverberate but the predominating sound is like gamelan played on seashells.

It isn’t going to rock anyone’s world but it may well make you smile.