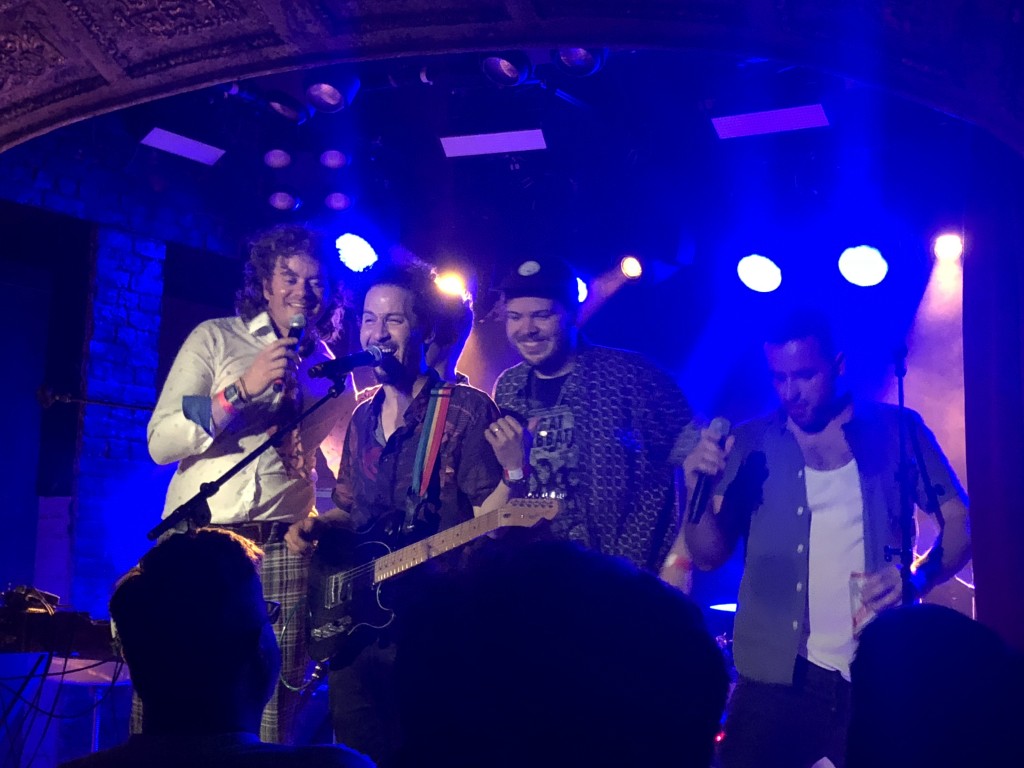 Andy Platts was a lovely bloke. He seemed quite young, with his slightly overgrown black curly hair and the kind of shirt that you could get for six quid from the Burton’s on the corner of Scunthorpe High Street in the 1980s.  I kind of imagined Andy as a Development Studies student. He would have fitted well into the student set at the University of Sussex, I thought. Playing in a band as good as Mama’s Gun he would have been a big willy on the student party circuit I concluded.

Talking of willies, whilst a small sample of the surprisingly large contingent of white haired bespectacled fifty-five pluses, who had dominated the audience nearest to the band, were sprinkling the last drops of wee into the urinals at Omeara, after the gig had finished, I listened in to the post-match analysis. ‘Timeless’ one gentleman explained in exultative tones. That’s true I thought. But maybe it wasn’t. What the gentleman probably meant was that the music of Andy and his colleagues spanned the decades. There were funk, soul, pop and acid jazz influences from between the 70s and early 90s, but they were all funnelled into the bands own, no holds bar, no flinch of irony, 21st Century London offering. Although you kind of heard a bit of James Brown, a bit of Stevie Wonder, enough hammond organ to take you back to the days of Mother Earth, funky guitar jamming to take you even further back to Mandrill, a cheeky slice of Mungo Jerry, and for a second Platts kind of looked a little bit like Prince, you know, with guitar swinging around his crotch, his eyes closed but focused upwards towards heaven and his face contorted as if orgasming – despite all of these influences – the music felt as fresh as homemade Spanish mayonnaise, you know the stuff with unpasteurised eggs. Cuidado!

Mama’s Gun, and this is their selling point, and this is why they make the perfect summer band, fill the room with flowers, they keep the sun shining on a hot summer’s evening, metaphorically, musically. Theirs is a big happy sound, up to a point they have rekindled the smiley feel good vibe of the acid jazz scene of the early 90s, the greatest contribution to young people’s spiritual well-being that music has ever made.

The gentlemen in the urinal, as they slotted their organs back into their underpants, and dried their hands (after washing) expanded their analysis. They couldn’t work out why the band weren’t bigger, although one of the congregation, revealing a moment of schadenfreude, pointed out that the kind of success they were imagining for the band would have denied them all the wonderful experience of seeing Mama’s Gun in such a  small and intimate venue as Omeara, which let me tell you, you leave scratching your head – is the ornate plaster work and theatre like stage setting a genuine legacy from some Victorian past or just some faux, Byronesque, cheap attempt to do up a hole in one of the London Bridge rail tunnels? But the point made by the gentleman in the gents was an interesting one. Mama’s Gun have some cracking tunes, especially On The Wire, a tune so funky that I can’t help wanting to be Starsky or Hutch every time I hear it. The thing is, its this ‘timeless’ point, there is no movement at this point in time, which the music of Mama’s Gun can easily latch on to. There is supposed to be a young and very serious jazz movement burgeoning in London, but Mama’s Gun are spending too much time enjoying themselves to be part of that. In short, their music is not part of a current scene, and in that sense they and their music are not trendy, even though both clearly appealed to a cross-section of men, all of whom would have qualified for a police identity parade for a crime committed by John Shuttleworth.

But the crowd in Omeara, they were the sixth man, or perhaps in this case the sixth woman, and I’m not talking just about the three middle aged black ladies who were dancing next to me, one of whom was drinking a can of Indian Pale Ale through a straw. And neither am I talking about the old people at the front, half of whom, perhaps wrongly, I suspected of being family members of the band. There was, from the middle of a crowd, from the heart, a recognition, and a desire to sing the songs of Mama’s Gun.The great force of energy was coming from London’s younger generations, the fans. At times they took over from Andy, who was a consummate charmer of audiences. Having said this I saw alot of the older people singing the lyrics, as if they had listened to them over and over again, as if the music of Mama’s Gun had reawakened some spirit of youth inside of them, the spirit of Mike and the Mechanics, Genesis and a litany of American soul singers. At one point Platts looked taken a back, humbled, by a crowd who knew and sang his songs so passionately. I felt a lump in my throat. At the end of the show, the desire for an encore quickly rose up, manifest in a mainly female rendition of the chorus of the last song the band played before leaving. Platts returned, flattered and determined to keep the party going.