I was lucky enough to hear Le Butcherettes last year, at Leeds’ Brudenell Social Club. They were supporting loopy guitar king, Omar Rodriguez Lopez’s latest project, Antemasque (following on from The Mars Volta and At The Drive-In). Before that band, Cedric briefly had a mad pop band called Bosnian Rainbows, with Teri Gender Bender on vocals. With a swagger and reach of the order of Grace Slick or Lisa Kekaula from The Bellrays, her presence is special. Le Butcherette’s previous album and EP felt a bit too much like hard work to these ears, with something polemical about them but that live performance showed the new tack they were taking, and it pays dividends here.

This set is big scale pop-punk, played in a garage, fleshed out with organ and fuzzy riffs. Songs bound from the speakers and strut, pounding out lyrics of love, revolution, fight and struggle. This is polemic that moves, the manifesto of the heart, carried by rock that makes it instantly accessible. This is the sort of air-punching rock that people like Patti Smith have made a career from. Of course, there’s a post-modern edge with the blending of multiple eras of influence whilst always acknowledging the primacy of the punching beat and rising choruses. 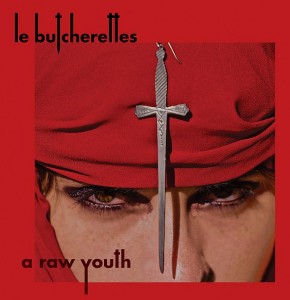 Teri is on a mission and says: “History repeats itself. There will always be conflict and sadly despite the rebels in our history there are people that are zombified. A Raw Youth is an awakened collective consciousness of wanting to live and not fear death.” This is tense and angry yet life-affirming. Teri’s not afraid to tell you “They Fuck You Over” and ready to tell you what to do about it.

Play loud and shout along to the choruses.