I’ve seen Lau play half-a dozen times over their ten years as a band and tonight celebrates that decade. In that time they have established themselves as unique purveyors of a fusion of folk, electronica and extended pieces almost classical in composition. That’s tied up tight with the eerie musical closeness and dry interplay. Having just three members makes for a clarity of effect, yet the closeness of the ideas makes for a complex result. 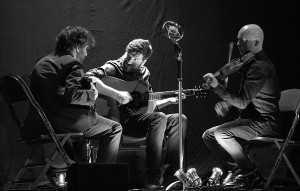 Tonight sees two sets, one simple, with the three players and an instrument each, round a microphone. Set two sees the stage set inflated to Emerson, Lake and Palmer proportions. Martin Green(the accordionist) gets a riser and huge keyboard / synth / Heath Robinson contraption, Kris Drever (the singer and guitarist) gets two guitars and Aidan O’Rourke (the fiddler) gets…., oh, he gets just one fiddle – and a lot of scathing comparisons to Chris Stout (a rival fiddler). 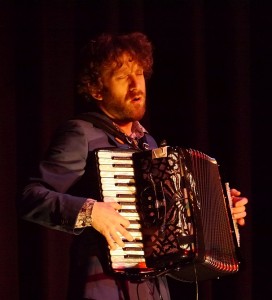 In the beautiful Victoria Hall in Saltaire there is rapt attention as the trio work through instrumentals, reels, laments and songs. The sound is thin and clear, allowing the tone of each player to be heard. Favourites, like Damned If I Do and Gallowhill are played and Drever sits in the middle, almost like a director, focusing his gaze on one or other of his colleagues. 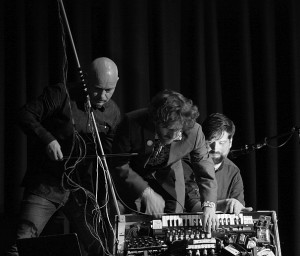 The second set opens with the big set piece. Looking like the Raft Of The Medusa, all three are marooned on Martin Green’s riser. Aidan bows a drone on an aerial contraption, Kris plays keys and Martin manipulates the sound and sets up loops. It highlights the latter half of their career, with the influence of Martin’s electronic explorations. The lovely Freeborn Man is sung – a sad and simple song of a travelling man missing the slow old ways. There is a Beta Band crunch and plinking as the fiddle is plucked and the electric guitar picks out the next song. The band rises to crescendos within lengthy pieces and either splits into a tuned cacophony reminiscent of the Grateful Dead playing “Space” or winds gently down to a new section. Songs open up to explore new spaces, they stretch and draw in solos, duos and lengthy electronic wig-outs before returning and departing again. 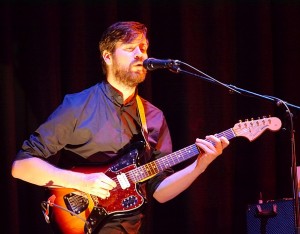 Sometimes the band draw breath and work a dry, acerbic humour on each other or people they know. More favourites are played; Save The Bees, the lovely Ghosts, the instrumental Torso. Far From Portland rides electronic surf with a strummed fiddle – a traditional-sounding melody is awash in electronics and a carefully balanced disorder. 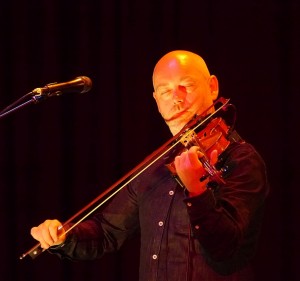 The lengthy show tonight highlights the difference between the lovely clear early style and the more experimental electronica and is therefore a bit less unified in tone than shorter shows, where an organic development has been in evidence. That doesn’t detract from the achievement of this trio in forging something genuinely new from traditional elements, something to celebrate over a couple of hours in Saltaire. 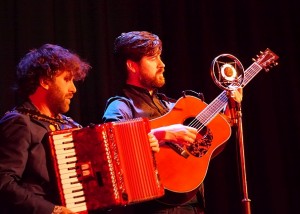 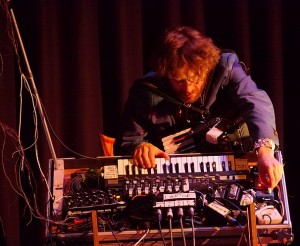