It takes some chutzpah to put on a technically excellent guitarist as support. By the time Antoine Dufour had used all his multiple tunings, played harmonics, tapped and slapped the guitar on originals as well as Muse and Coldplay covers, I didn’t think the virtuosity would be topped. 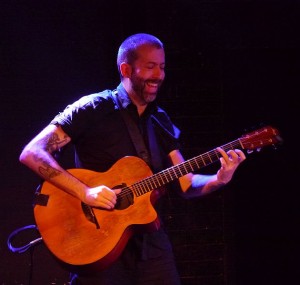 Jon Gomm has an ability to play more parts of the guitar than you have thought about, all at the same time. And he does it while being self-deprecating and semi-lugubrious. The supremely attentive audience welcomed him on stage then listened in silence as Jon did his thing. In bare feet, he was ready to use four limbs at once. Feet worked effects pedals, fingers twisted pegs to retune strings mid-note, one hand slapped the neck while the other tapped the body. His third and fourth hands (or so it seemed…..) plucked, stroked and tapped strings, playing at the bridge or neck as needed, and used the bottle neck to slide on steel strings. 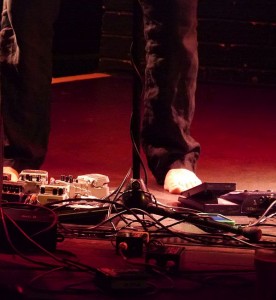 Fortunately Jon can sing more than a bit, and has a decent line in songs, so it’s not all tricks and flicks. Opening with Stupid Blues, he shows off his stylings, before telling us that “I have the sort of face that makes random strangers tell me to cheer up”.  With a nice line in chat, the audience (who hardly needed winning over) are eating from his hand. His new album is plugged: “It’s five pounds but you can pay more if you’re feeling generous – look at the state of me”. Lots of showing off follows – all in the service of the song’s mood. Chinese scales are attempted and prove effective, Middle Eastern ones less so, on a blustery war song. A twangy raga-ish Indian-inflected piece near the end of the set brings to mind US West Coast guitarist, Steve Kimock. 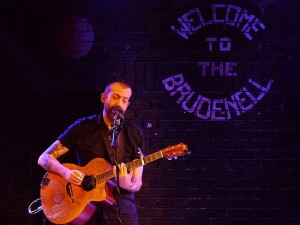 An hour of focussed concentration showcases a remarkable range and technical ability I’ve not heard live since seeing Keller Williams. Jon Gomm is one of the most adept guitarists I have ever heard. There are some that would focus more on their own musical voice and others with stronger songs but the evening is a jaw-dropping masterclass in technique (as well as nice-guy-ness). The best received song of the evening is the Youtube hit, Passionflower – it would make a good jumping-on point for the uninitiated.