While he is the image of the eternal outsider – mouthy, punchy and looking like the scrawny, leather-jacketed rebel at school – and always hymning the outsider, Jesse Malin will never actually be an outsider. Full of confidence, stories and motor-mouth one-liners, he wins people over quickly. That applies on stage too, where his charisma has made his shows cult favourites.

This set, his second in a year, tells yarns of his possible past selves or alternative lives, the drifters, lost and lonely. But also the survivors, those getting by on minimum wage or by ducking and diving on their survival instinct. Even those looking back on hard times. He backs it up with pretty straight ahead rock and roll – something a bit punky, a New York attitude peeking through. Something like the Patti Smith band used to be. There’s the odd yearning reflection but much of this is roaring and needling New York new wave or stomping triple-threats (The Hustlers), a distance on from the slightly more Americana-influenced early material.

There is a swagger and bluster here that moves Malin on from a slightly reedy underdog. There are still notes of the old Jesse in heartfelt songs like All Bets Are Off. Often compared to a low-rent Springsteen. Jesse Malin has a similar drive to celebrate and mourn the lives of America’s struggling folk, getting by through lives of downs as well as ups. He carries a sense of the weight of humanity as well as the joy of everyday life, even through its grimier moments. 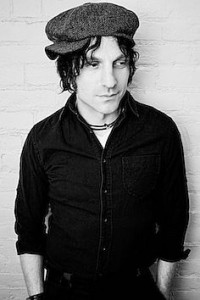 A certain sense of maturity flows through this – longer guitar solos, a greater weight to the riffs, a little more gravitas. Malin would attribute this to living in the moment – the band swore off mobile phones and the internet while they were recording. Is there a note of deeper feeling here? Perhaps. What I know is that Jesse Malin is a great live performer and his records ain’t too shabby either – this as worthy as any of its predecessors. If you want a taste – try the brassy You Know It’s Dark When Atheists Start To Pray.