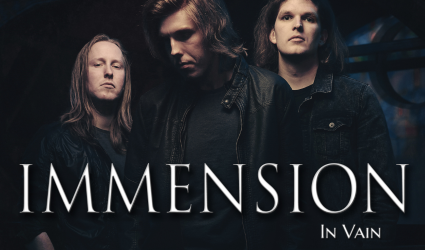 Ingenious innovators Immension are set to release their debut album In Vain on June 15. The best way to describe delete in vain is absolutely massive, the album goes above and beyond what is typically expected of a fresh metal band – the riffs are big and memorable, the melodies are intertwined, layered and surprisingly heavy. Right from the title track In Vain the band showcase and ability to be extremely memorable, the vocals are clean and passionate manage to match the hooks provided by the guitars, the chorus of the title track and Shadow Of Yourself will stay with the listener for quite a while – this is typical of the album, heavy and unforgettable. Tracks like The Fantasy along with In The Dead Of Winter and a few others are a good demonstration of how heavy this band can go, the drums are demanding and distinct, the vocals are shaken and it all combines into a few harrowing experiences, Immension have quite a range in their music. This is doubly true for the few soft, melodic and soulful tracks on the album All That Remains is particularly earnest. The use of Pianos in Love Never Dies is the highlight of the album. Despite the different kinds of tracks on the album Immension have avoided spreading themselves too thin, each track sounds distinctly them – and although the album is a little inconsistent it manages to hold itself together remarkably well.
Although most of the tracks float around the five minute mark the album manages to avoid becoming too repetitive. Each track is different enough to keep the album interesting, but similar enough to still work together as an album.

The long and short of it is that Immension are releasing one of the year’s most interesting metal debuts, In Vain sounds like the work of a band that are way ahead of their time – while still showcasing a variety of influences from classic metal to the modern stadium stompers. Definitely check it out.

I’m a music enthusiast, and I also host The Moshmallow on Hullfire Radio which you can hear at: https://www.mixcloud.com/TheMoshmallow/

Grade 2 shake up the Graveyard Island with latest album

L.A. Punk Rockers Back With “Age Of Unreason”