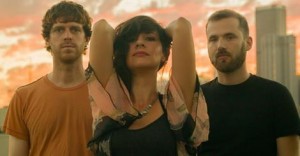 “… Sarah Negahdari sounding like a Stevie Nicks/Siouxsie Sioux hybrid and who has been described as “one of the coolest women in rock” – ‘Astrid’ is instantly ear-engaging.” – Little Indie Blogs

California band Happy Hollows are heading to the UK for their first tour on this side of the pond, bringing with them a shiny new single – Astrid. This will come as welcome news for fans of the band who’ve been waiting for new material since their 2013 album Amethyst was released.

With Amethyst, the band’s sound had undergone a transformation from noisy, garage-rock beginnings to something much poppier and more melodic. This trend has continued with their latest offering, which shows no trace of their scuzzy early days.

There’s no time wasted in drawing the listener in to Astrid. Almost immediately upon hitting play you’re immersed in a blend of 80s inspired synth and Sarah Negahdari’s edgy vocals, before weaving in to a playful and catchy guitar hook. The song builds to a crescendo with the trance-like chanting “I belong to you”, which sounds almost angelic juxtaposed with the purposeful march of “this is how it all fell apart/this is he how we built it again” that carries you through to the final notes. Yet it feels as though there is a certain restraint there, as if Negahdari is holding herself back from something more gritty and powerful. No doubt this side will be unleashed during live performances, guaranteeing an exhilarating experience for the crowd.

If you managed to miss the release of Amethyst and were expecting something akin to their sound on Spells, Astrid may not be the song for you. However, you’d be doing yourself a disservice by skipping it altogether. It’ll be looping through your head long after you’ve finished listening.

Astrid will be released on May 24th but you can stream it here now:

Happy Hollows will be joined by Reykjavik Kids for the following UK dates: