Playing to a select but appreciative audience, Halo Maud played a bit of a blinder. Playing the album (they only have the one and an EP) but playing it differently, it made the trip well worth it for fans of the album. And what an album – dream-pop fused with the French traditions of synth pop, a classic French lead voice, tinged sometimes with flavours of Bjork, this flies its flag proudly alongside Gwenno’s Welsh / Cornish albums or Sarah Nixey. 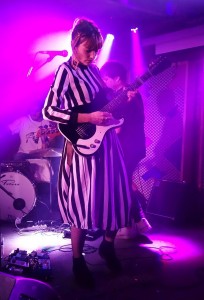 Halo has some very memorable songs. Du Pouvoir from the first EP (and the album) is often stuck in my head. Or Surprise, melancholic and hypnotic. Tu Sais Comme Je Suis has a lovely vocal twinge, bringing the vulnerability of Bjork to mind and, as the penultimate song, has an extended keyboard workout. 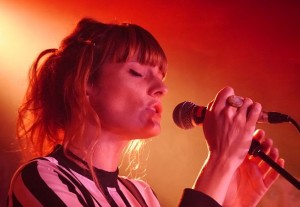 She has simple, romantic lyrics in French and English and the music is chiefly two parts. One: The detailed and busy drums combined with the bass, facing the drums and locked in tight. Two: The voice and the synth making the melody. Decorating the edges and occasionally carrying a break is Halo’s guitar. Very simple lines but clearly important as she digs herself down into them with a little gawky dance. Especially Dans La Nuit, where she and the synths move from a big gentle ballad to a big wigout and she stomps and twists the effects pedals. Other times she dances foot to foot with excitement. 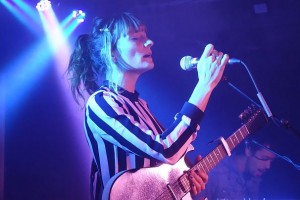 The band play the songs more live than the album, with more guitar but that is all the material they have and before an hour is up they have delivered ten songs and the encore, Des Bras, leaves the audience wanting more and showcases the strength of the band. 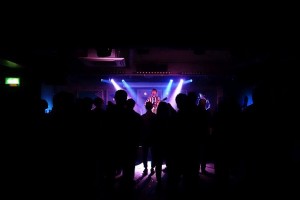 Definitely one to watch.