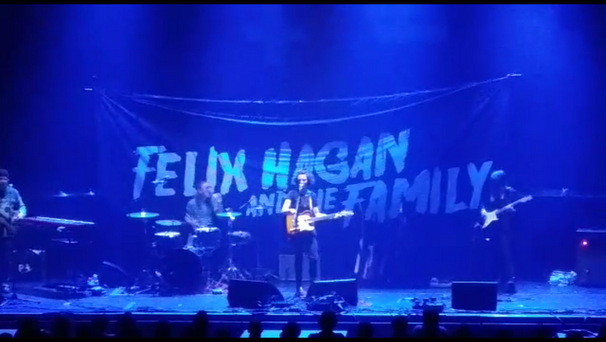 Esmé Patterson played on the 3rd of December in the Usher Hall in Edinburgh. She was Frank Turner’s first support, on before Felix Hagen and the Family. It was a shame she had to sing in front of a big banner Felix had put up behind her. This did not stop her performing to the best of her ability. She was right up there doing her own thing. During her tour with Frank Turner she also played two of her own headline shows in Dublin and London.

To any of you that haven’t yet heard of Esmé Patterson she is in actual fact on to her third album “We Were Wild” which was released on the 11th of November. Amazingly the video of the title track to this album was shot from her iPhone in the beautiful wilds of Alaska. It gives a sense of freedom and wonder to the song. Esmé has a typical quick and live recording style. On this video she was director, producer and editor.

Esmé Patterson was brilliant at adopting personas of famous musicians and gives them a long overdue voice on her last album. Some people class her as country I would definitely say she’s more rock n roll with a punk twist. I’ve actually heard people call it ‘snapsye rock’. I like this genre.

When first on stage she asked everyone how they were all doing and told us that this was by far the nicest room she had played music in. She started of with ‘Alone’, a great tune with distorted guitar and a howling twang to some of the singing. She fist pumped her heart when she sang the lyrics ‘I was living’. In some ways her style echoed that of ‘The Cure’.

Esmé’s hair was curly and half of it was clipped back. She had a long necklace over her black t shirt and black jeans. Her drummer was wearing a red striped bandana and seemed to like using a soft ball on the symbols for the song ‘Francine’. Another young girl on guitar really helped with distorted guitar sounds. She really put her all into it crouching down to the floor on her knees while playing. Esmé’s bassist was a big tall slice of cool wearing a hat and playing a left handed bass.

“Thank you so much. How are you guys doing, is everyone feeling alright?….alright! Cool! Man last night was our first ever show in Scotland. I had never been before. It’s unbelievable and I’m not just saying that. I love it! I hope you know how cool your zone is!” she did stutter and stammer through this. Funnily enough I had been on a Taekwon-do course that day and met another student who had seen her the night before in Aberdeen. He said she was great but very nervous. I could still see some of those nerves when she spoke but not when she sang.

“This song goes out to all the human beings in the room” she said and then laughed, “We are all just the same. We are human. That’s a great thing.” The blue lightning on stage turned red as she sang ‘No River’, which was easy to listen to and very catchy.

Esmé then explained how the songs from her most recent album were about stepping into the lives of women about whom famous songs have already been written, “ I tried to make them real women with complex emotions” she explained. She then sang ‘Bluebird’ a song about Eleanor Rigby, the high tones of her voice were exquisite.

She then introduced her next track ‘Francine’ some of the lyrics from which she screamed out as she sang. It sounded great. If it was just a bit more lively it would have been spot on. Twice Esmé was down fixing her guitar distorted sounds. After the third try she really energised half way through this song and showed some great personality grabbing her hair and jumping statically.

Esmé Patterson was such a nice young girl and managed to convert her overthinking everything in life into some great lyrical songs. I loved her sound. I loved how her sound was her own. If she could provide a bit more kick to her stage presence and less nerves then I would go see her do a headline show. For the moment I’m going to catch up on her albums.