I was there to see if Eric Chenaux could make the noises from his latest album live. He did. And equally amazing; Eric spent quite a while beforehand, tuning his guitar carefully.

To clarify, Eric’s Slowly Paradise is a wonderful and woozy dream of strange sounds and notes so wrong they are right, like a stylophone that’s been drinking raspberry cider in the sunshine. Here, in Bradford’s fantastic tiny art gallery venue, Mr Chenaux hypnotised the audience with a virtuoso display of guitar playing, filtered through an alternative frame of reference. His eyes closed, mind focussed on his fingers and his feet on the three effect pedals, he worked the strings, pedals and whammy bar of his Gibson semi-acoustic into a hazy otherworld. 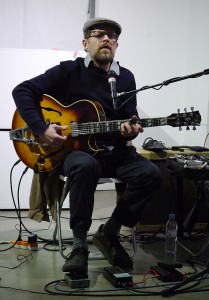 Opening the set with gentle and generous humour, Eric described the set in advance, the number of songs, the rise and fall of pace and emotion. He says he likes to know what is coming. He makes it sound like yoga or guided meditation – telling us how he will kindly stir us at the end, like after a massage to give us the energy to get home. We are charmed and smile as we settle down. Most of what we hear are recent songs with beautiful vulnerable high vocal tones giving off the colours of summer and lazy love. We often get acapella sections that work perfectly. The guitar work is astonishing and the sound too. Often, I wouldn’t have known it was guitar unless watching, bending notes and running them through midi effects atop programmed loops.

A particularly notable song is adapted from a 14th Century courtly love song from Avignon, “with the God stuff taken out”. Abandoned Rose from the album is crazier than the record: Some de-tuning prefigures a crazy ragtime blues guitar backing a gentle vocal line. There Is Our Love closes the set – “there are dreams we call the breeze” – with tones that recall a wasp trapped in a pane of double-glazing. The contrast of the avant-garde guitar and the dreamy vocals is marvellous and creates a hushed awe in the small audience.

The gig ends with a feeling of reluctantly waking from a dream of flying. Remarkable. 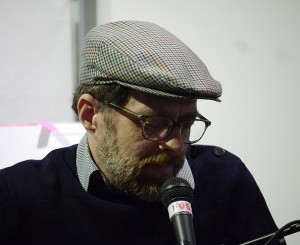 Read our review of the album here: http://www.vanguard-online.co.uk/eric-chenaux-slowly-paradise-jazzy-and-distinctive/

Look for future events at Fuse in Bradford here: http://www.wearefuse.co/