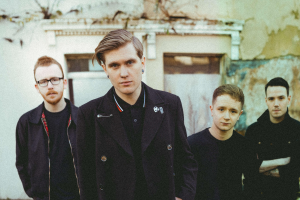 After a hugely successful run of shows supporting horror punk sextet Creeper for their UK shows in March, Boston’s Energy have announced their own run of headline UK shows, beginning in Manchester on July 29th, and in beautifully cyclical fashion, the band have just announced their support as Miss Vincent, an enticingly exciting punk quartet who have risen up through the same South Coast Punk scene that nurtured and helped Creeper themselves build the core of their dedicated fanbase several years ago!
After building a solid fanbase in the south coast scene, Miss Vincent are all set to break out onto the national stage with the release of their new EP ‘Somewhere Else’, which is due for release this Friday, May 19th, via Uncle M. The mixture of tracks, some -like penultimate track ‘Beauty in Darkness’- oozing with dark, melancholy mist, and others such as lead single ‘Cold Hands’ that blend pure, crystalline vocals with furiously bouncy melodies and infectiously gritty basslines, giving Miss Vincent a sound that is both inviting and packed with feeling, and is guaranteed to get every head bopping along on this run of wonderfully intimate venues. Definitely rock up early to catch these guys in action- if the soaring upward trajectory that Creeper have seen is anything to go by, there’s something powerful in the water down on the south coast, something which promises big things on the horizon for Miss Vincent in the coming years! Get in on it while you can!

‘Somewhere Else’ is currently streaming on Kerrang.com ahead of its official release on Friday, May 19th:http://www.kerrang.com/48553/stream-new-miss-vincent-ep-somewhere-else/

Also, check out the band’s video for their latest single from the upcoming EP, ‘Cold Hands’: https://youtu.be/wo0-KVLwt7I

The tour poster and dates are below: 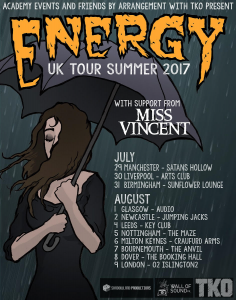