From the moment Elle stepped on stage it was clear her set was going to be entirely different to Samm Henshaw’s performance prior. Her ballsy attitude radiated from her and was channelled in her music as her show was kick started with some loud guitar music and a country twist.

An American singer/songwriter from California, Elle is 26 years old and no stranger to tours in the UK. She claimed that it would be the ‘best 30 minutes’ of the audience’s lives and thanked them for paying her to drink and have a great time. Her second song ‘Under the Influence’ truly portrayed the country western side to her music and exhibited her gravelly voice perfectly. Ellle’s charm lies in her truthful attitude, her cockiness was somewhat funny and likeable. She revealed that she had a ‘real slutty year’ last year which allowed her to write a great song about it. There is no disputing it made her stage presence unshakeable.

A certain crowd pleaser however was a song named ‘To be a Man’– think a country/rock version of Beyonce’s ‘If I were a Boy’ (not sure she’d be happy with that comparison.) Nevertheless it definitely pleased the crowed who joined in singing some parts of the chorus and appeared to enjoy the satirical lyrics.

By the end of her set it was impossible not to have warmed to Elle the self proclaimed ‘asshole’. Her talent is indisputable and her stage ensures an entertaining show. 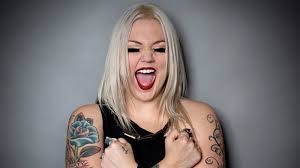 Your album, Love Stuff, was released in February, how has it been since then?

It has been crazy, I feel like when I go back to the states at the end of the week everyone keeps telling me I’m in for a real surprise cause it’s [Ex’s & Oh’s] one of the most played songs in America. So it’s kind of crazy, so I’m happy I haven’t been around for that cause I’d probably get a big head. But I’m excited to go back and see what’s happened because I’ve been gone for a month. But yea, I just hope that it comes over here and does well, I hope people over here like my music.

So how did you feel about releasing it?

I mean I think there are nerves that come with anything you’re excited about or that you care about. I remember the night before my record came out I was like okay everyone could f***ing hate it and I could just flop but it was just, you know, I’m really big in to positive thinking; that being said its easier said than done but um I just kind of went in to it expect nothing and hope for the best. I just tried to stay positive and it’s doing really well, thank God. It would’ve sucked if it hadn’t. Yea it’s been really fun and I didn’t expect it to do so well so I’m really happy.

How long did it take you to write the album?

Some of the songs I’d written since before I was even signed. So I feel like the record is a really good introduction to me as a musician and person cause it’s pretty personal. So some I already had and knew I wanted on the record, the rest of the record was co-written with people and I was flying all over the world and writing with all these people. That took about three years to write and record and it was a really long process, it’s crazy to even think about. It took forever. I still feel like I’m 17 but I’m 26 now, gosh I’m getting so old, it’s crazy.

How do you go about writing each song, is every song different?

It’s all different. When I was younger and I first really started to get in to song writing I used to put myself in bad situations like dating some asshole, drink a lot and go through some bad break up just knowing l’d at least get a song out of it. But then I figured out actually I didn’t need to put myself in these awful situations and I can draw from past feelings and draw from past things to get a song. But it’s all different… Do the melodies come first or do the lyrics? I think most of the times when I sit down and write a song, which is not very often anymore which makes me really sad and kind of frustrated, But when I do there’s this weird feeling I get where I need to go find a room and be alone for a little bit and I just know, it’s this weird thing and I go off with this little light bulb and I’ll pick up a guitar and I’ll start singing. I mean most of my favourite songs I’ve ever written just poured out of me in 20 minutes. But then co-writing is like a blind date, I don’t love doing it but you know it goes well and you find someone that brings something to the table that you don’t have. So I like it but it’s still a pretty personal thing for me. And it’s all different and I’m sure it’ll still change more.

If you could collaborate with anyone, who would it be?

I’m obsessed with Leon Bridges right now, he’s this young kid from Texas and he’s like a young Sam Cooke he’s amazing. His album is fucking perfect, I listen to it like three or four times a day, it’s one of those albums. I would love to sing a song with him, it would be amazing.

So is this your first UK tour?

No, I’ve been touring over here for about 5 years.

I love it, I like the accents, I like the boys and I like the drinking. I like all of it. Now it’s getting a bit too cold its f***ing freezing. But I do like that you can wear nice coats and boots so I love coming here. I truly love London, I love Scotland.

How does it compare touring in the UK to touring in America, is there a big difference?

It’s very, very different. Maybe just because in the states I play a lot more headlining shows, you can tell the difference in fans from the genres of music. I’ve toured over here with pop bands, with indie rock bands and now with James kind of singer songwriter and all the audiences are totally different. But I don’t know, it’s also that I’m not very well known over here so I’ll do my best to win the crowd over, a lot of people don’t come to see the openers which is just the fact of it. That’s fine though and there are still magical moments in every show and I don’t know, it’s different but I always have fun and look forward to coming back and playing more shows.

How long have you been on tour for?

Oh I don’t know what day it is today…so maybe three and a half weeks.

So when you finish this tour have you got any more tours lined up?

I have three tours coming up, it’s crazy. But I get to go home on Friday night for a whopping 24 hours then I’m back out playing shows.

Do you enjoy touring? What are the best and worst bits?

I mean just like any job there are good and bad parts. I miss my mum, my family, I miss being able to be naked, have my own personal space, I miss having my phone working all the time, I miss my dogs but I get to travel the world and I get to meet wonderful people every night and not a lot of people get to say that. So it’s really cool. And I’m doing what I love, my fucking dream is coming true. I love playing my music and touring the world. I’m on a sold out tour and it’s really awesome… But I would love to sleep more.