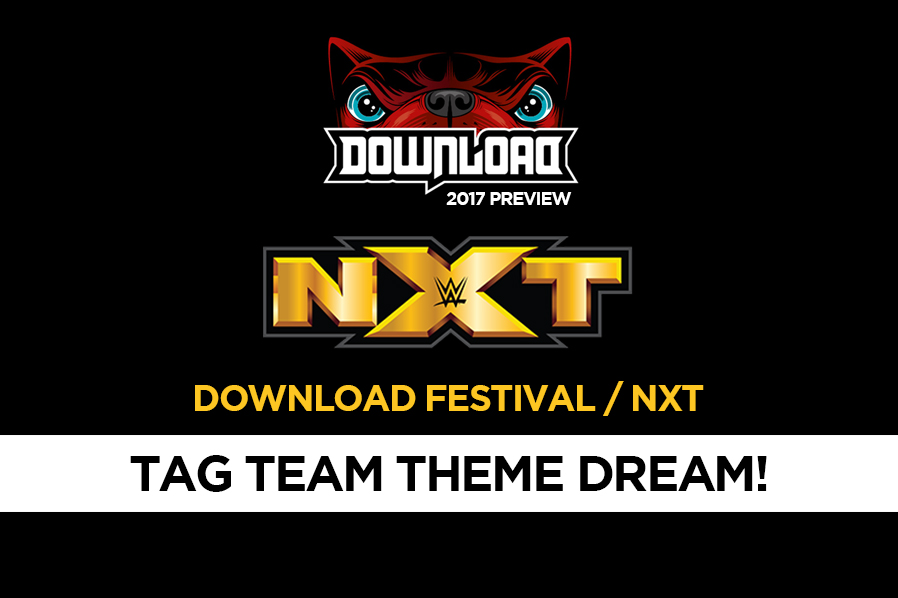 In 2017, you’ll be hard pressed to go to a metal, rock or hardcore show and not see someone wearing a professional wrestling t-shirt, which is why NXT returning for their second year at the hallowed Donington Park is simply best for business. With three professional wrestler’s performing at this years festival (Chris Jericho of Fozzy, Mark Andrews of Junior and Andy Williams of Every Time I Die), it is safe to say that these superstars know their music and know exactly what they want when they walk out to the squared circle. A superstar’s entrance music is crucial. It must be attention grabbing, it must represent the superstar and most importantly, it has to be memorable. So, with this in mind, we have chosen five NXT superstars that will be making an appearance at this years Download festival and paired them up with a band from this year’s festival to give them a new theme song!

So, hear me out. Devin Townsend is definitely a character, with a lot of variety in his lyrical content, from questioning mortality and life to then talking about fart jokes. But do not let this fool you as he is one of the most creative and talented musicians in Metal today, regularly blending aggressive metal tendencies with a huge symphonic element, as displayed in songs such as Kingdom, Supercrush! and Truth. The current NXT champion, Bobby Roode has been in NXT a mere year, making his NXT debut at last years Download festival, yet his professional career started in the late 90’s, the same time Townsend really broke through with the release of the albums Ocean Machine and Infinity. As champ, Roode deserves a theme with creativity, power and edge, which is why Townsend is the immediate choice to give the Glorious one, the most glorious theme possible!

NXT newest star, the bringer of darkness and spirits, with kicks so calculated and lightning fast you wont have chance to raise your hands before you’re on the floor. Netherland’s greatest export; Aleister Black is a very mysterious character, as well as being the personification of counterculture, covered head to toe in tattoos, bearded and a love of heavy music. Black’s current theme is provided by Hardcore band Incendiary, so it only makes sense for one of the biggest hardcore bands on the planet currently to work with him. Code Orange. After dropping easily one of the hottest and heaviest albums of 2017 in the form of Forever, Code Orange have the intensity, the sound and versatility to provide fast dynamics, mixed with dark samples yet still keeping within the upbeat Hardcore stylistic which then drops into a breakdown heavier than a lead brick. The additional edge of distorted synth sounds to Code Orange’s newest work adds a new layer to Hardcore and adds the edge which Black represents as he is set to take on the NXT universe.

Authors Of Pain. Intimidating, unique, terrifyingly powerful and the most dominant force in NXT currently. Weighing in at a combined weight of 620 pounds of muscle and destruction, it is obvious that this band need a slow, but heavy as sin theme tune. Thankfully, Krokodil grace this years Download lineup to have this taken care of. Krokodil live and breath heavy melody, with vicious growling vocals, heavy, thick chugging chords and a huge drum sound, it would only make sense for the Authors Of Pain to be the personification of what Krokodil are and represent.

Let’s start a riot, with her Punk sensibilities and styles, Ruby Riot has burst into NXT with a lot of promise, angst and a lot to prove, so with this in mind, it only seems right to pair her up with Blood Youth! Blood Youth, much like Ruby are fresh faced on the scene with a powerful sound and a point to prove, bringing their own unique styles to the table. Riot and BY have a lot of energy and have huge careers ahead of them and both personify what the modern Punk rocker can accomplish in this current society, which quite frankly, is limitless! Most importantly though, these stars are ready to prove why they’re both the next big thing and besides, both NXT and Download are the lands of opportunity.

As mentioned in our Top 10 Sunday article, The Dillenger Escape Plan are fast paced, unpredictable, intense and quite frankly, insane. Pair this up with NXT’s newest faction SAnitY and you have the perfect combination. SAnitY have been a leading powerhouse in NXT since their debut last fall, lead by Eric Young, the team compromising of Scottish brute Killian Dain (the beard may make you mistake him as a member of Amon Amarth), the enchanting, yet entirely crazed, Nikki Cross and the huge, German anarchist Alexander Wolfe. What makes this faction unique is their unpredictability. Will they inflict a vicious beatdown or terrify you with their threats on the mic on their path to world domination. SAnitY summed up are power and chaos in a diverse four piece, much like The Dillenger Escape Plan, they are going to leave a huge impact and legacy behind, however, whilst it is now the end for TDEP it is only the beginning for SANitY.

There are a lot of partnerships to be formed over the Download weekend, both in ring and behind the scenes. But, simply put, both Download festival and NXT are the lands of opportunity and play host to a perfect mixture of veteran reliability with new flare, but you are guaranteed to see the next big thing right before your very eyes as it begins to flourish.

All names, photos and trademarks belong to WWE.