The Slits were the first ever riot girl punk band. They helped ignite the punk explosion in 1977 and yet seem to have been written out of mainstream recollections of the punk era. Possibly because they had no commercial success and they are women. A soon to be released documentary covering the band’s history called ‘Here to Be Heard’ probably wont change the fact that the history of punk tends to be reduced to the success of The Sex Pistols and The Clash, but it does provide a reasonably interesting look back at the history of the band.

The documentary helpfully explains how in as much as the Sex Pistols and The Clash can lay claim to being the forefathers of punk, The Slits were the foremothers. This is no coincidence. The Sex Pistols, The Clash and The Slits were intimately related prior to and during the punk era. Prior to the punk explosion Paloma Romero, a Spaniard who had come to London to find herself and ended up becoming drummer for The Splits, was dating Joe Strummer from the Clash. She had also jammed with Sid Vicious, but their mutual dislike had led to her wanting to form her own band. The Slits lead singer, Ari Up, who was only 15 at the time she joined the band, was the daughter of a woman who would go on to marry John Lydon. In any case the documentary charts the band’s first appearance at one of the first ever punk gigs in Harlesden, London with The Clash and The Buzzcocks. The Slits would go on to provide support to The Clash on their White Riot tour.

Although punk bands are generally considered to be white English kids, only fifty per cent of the Slits, guitarist Viv Albertine and Tessa Pollit, were English. Ari Up, the lead singer, was born in Germany, and Paloma Romero, the woman who put the band together was originally born on the North African enclave of Spain called Melilla. I did enjoy getting an insight into the way in which members of The Slits were intimately related to members of The Sex Pistols and The Clash, though the documentary could have usefully gone into the childhood of the band members a bit more, to see what had put each one of them on this special path to forming the world’s first all female punk band.

Ari Up appeared to be especially worthy of further analysis. She was in the band from the age of 15, was an extraordinarily powerful influence on the band members, and yet there was no footage of any interviews with Ari, whose death occurred prior to and marked the end point of the documentary. An unstated subplot to the documentary is that John Lydon, who married Ari’s mother, later on ended up looking after Ari’s children, claiming that he did so because Ari had not been able to cope with the caring duties demanded of parenthood. Ari ended up dying of breast cancer. Lydon claimed she had eschewed chemotherapy on the basis that it would mean she would have to cut her dreadlocks. There was, then, a side to Ari that seemed like she was always on the run. She was always honest people said, but complete honesty can sometimes be the last hope of someone who has lost hope in people. A whole documentary could have been made about Ari, and indeed the last half of this documentary was, but it was not so much about exploring who she was, but rather accounting for her behaviour and the state of the relationships she had with the members after she reformed the band in 2005.

Although The Slits are pigeon holed as a punk riot girl band, the documentary explains how the band, in practice, and under the guidance of lead singer Ari Up, continually evolved their musical interest, getting into reggae and a more new age sound as the years progressed.

One thing really does shine out from this documentary. The Slits had balls, or perhaps I should say really enlarged clitorises? They had to show the kind of steely determination that was being shown by another woman making moves, Iron Maggy. The opposition and opprobrium for women doing their thing, exhibiting and shouting about their untrammelled sexual desire bought great opposition. They had to bribe the bus driver of the White Riot tour to take them on. Hoteliers would refuse them entry. Reggae artists and Rastafarians, whom the band were keen to hook up with, disapproved of women being out of their home and with their hair uncovered. Ari Up was knifed by a man at one gig who prior to the stabbing said to her, ‘Here’s one slit for you’. It does feel fitting that this video is coming out in the year marking the centenary of women winning the right to vote. What The Slits helped women achieve, on the street, was perhaps another step along the way, which took a level of determination and bravery equal to that shown by the suffragettes, and which was enabled by what the suffragettes had achieved for women at the ballot box all those years before.

Given that it was so difficult for women to express their sexuality and sexual desire at that point in time, and given all the shit the band faced, it begs the question of how and why they did succeed? The documentary, I don’t think gets anywhere close to beginning to answer that, sadly. It does make me wonder, yet again, about how the pre-existing intimacy that members shared with The Clash and The Sex Pistols was central to this. Without the invitation to go on tour with The Clash would The Slits ever have made it? Then I’m wondering wouldn’t it have been useful for the documentary to have gone into the attitude of The Clash for example towards The Slits? Was it the case that progressive attitudes shown by males in the punk movement helped a group of women do what The Slits did?

The documentary is OK, but not brilliant. In some ways the documentary is in two halves, the first half charting the formation and whirlwind success of the band between 1977 and 1981. Here I think people who are well read on The Slits are unlikely to learn much new. The second half does bring the story up to date by accounting for what happened when Ari Up reformed the band in 2005, leading up to her death in 2010. 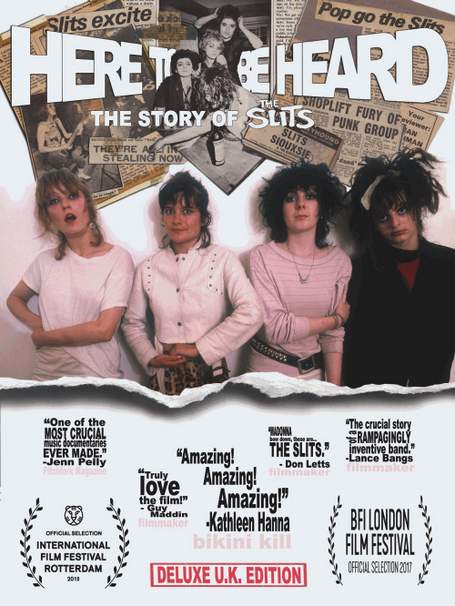 It received its world premiere at the BFI London Film Festival in mid-October.

It can be seen again in the capital at the Sound Screen Music & Film Festival, which runs from
25th-27th March, followed by a run of further screenings that also include Q&A’s with director
Badgley and/or band members. An updated list of confirmed dates is as follows :

Reflecting on the title for this article reminded me of another all female production I recently saw. The production was a political march through Israel of Israeli and Palestinian women, covered in this video.