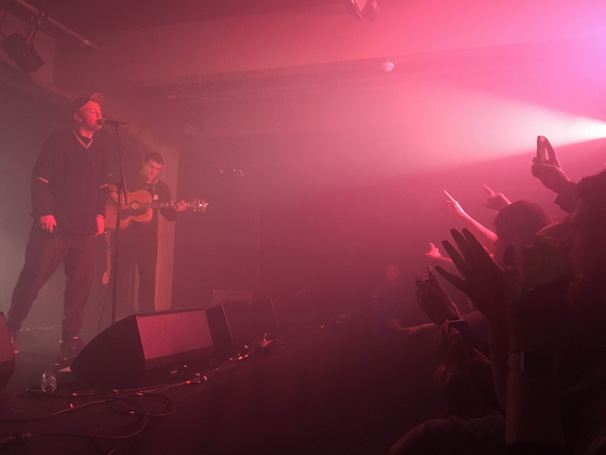 DMA’s are an Australian rock band that were formed in 2012.

Their  influences are Neil Young, The Beatles, Wilco, Paul Simon and Bob Dylan. Saying that they are definitely fans of artists from the late 80s and early 90s. Bands like The Verve, Happy Mondays, Primal Scream, Nirvana, Stone Roses, Ride, Dinosaur Jr are all influence. One can also sense an Oasis influence.

This was a sell out in the SWG3 in Glasgow and the “here we fucking go” chants had started before the DMA’s came on stage. The band eased their way on stage to mega flashing strobe lights which continued throughout the bulk of the show. Matt started his guitar first. Tommy was right at the front with both arms in the air with a ‘lets be avin it’ feel and carrying a musical bells stick in one hand. Their attitude was up at the top, it was ‘stinking great’!

These guys are causing a real stir in the UK.

The audience were pumped even with the first song Play It Out.

I’ve never seen a band with such a laid back attitude on stage. What a wicked flow this gave them. Tommy was dressed with cap, stylish casuals and gazelles. Johnny had a long sleeved top and wide jeans. Matt had absolutely no dress sense and was wearing a light cap, striped coloured top and baggy cropped trousers. The only stylish thing he wore was his gazelles footwear. But you know what? It worked, cause I think the word cool was invented for this guy. Everything just worked.

Feels Like came next. Tommy pounded his fist on his chest with such heartfelt emotion and waved his hands, egging on the crowd. No need really as the fans were already off the Richter scale.

Straight Dimensions was chilled. Tommy’s singing eyes were closed, full of passion, as he sang into the mic. Johnny was walking around on stage strumming away, singing along with the crowd to the lyrics. Tommy fist pumped the air, then fist pumped the ground.

I was in awe of these cheeky chappies. I had already seen them on a bigger stage in the summer at T in the Park where a wide gathering of people watched. It was really special to watch them close up on this smaller stage though. Their attitude had us all buzzing.

DMA’s chants came from all around the venue. The stage was smokey. Matt came to the very edge of the stage showing off his skills protruding his guitar into the air with his hips, his hand lifted up straight. He had a ‘look at me’ attitude. He loved his jangling distorted guitar sound. He just stared at the fans whilst he nodded his head. 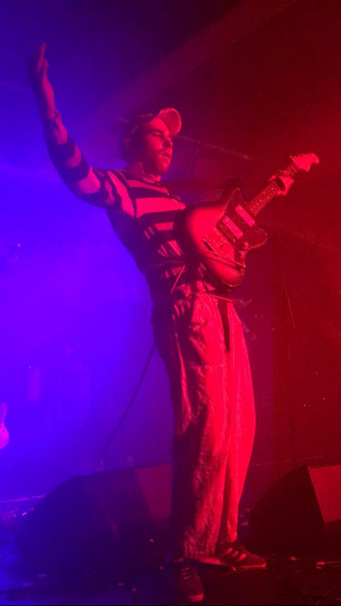 Tommy headed over in between drinking and cuddled Matt for being a genius playing to Melbourne. Tommy went back to his booze and then to the front of the stage again, with his hands in the air again to relish in Matt’s melody.

Johnny had plenty of stage movement playing to Timeless. Tommy then casually walked to the mic, hands in pockets, to announce In The Moment. The fans all sang along to a tune which has an Inspiral Carpets feel to it. These guys looked like they were jamming in the outback wi booze and a BBQ, they were that laid back. The fans were going wild for them.

After Too Soon, a track which sounds a bit like the Stone Roses, Tommy asked for the house lights to be turned on so he could see the crowd. The fans responded with their DMA’s chants and he took in the view of his adoring followers.

What blew me away next was the best Madonna cover, which I was not expecting from an indie band. Beautiful Stranger was a delight to hear, so good that I don’t think I’d listen to Madonna’s version ever again. Strobe lights were in full force to match this majestic cover.

Step Up The Morphine was played and a fan shouted out “You’re better than Oasis” and to be honest I’m inclined to agree.

Matt had quite a few guitar changes all through the gig, he changed his guitar as many times as Tommy changed from beer to his water. The place was electric with Your Low, the crowd ignited with bounce and pleasure.

Most of the band then left the stage, leaving Johnny on guitar and Tommy singing So We Know. Matt re-entered to give the song real edge.

Matt and Johnny faced each other and play out Delete. Matt sat at the back and then got up and sang. It was strobe mania again and you could see Tommy chewing the gum he’d had since the beginning of the gig. Other band members rejoined the stage.

They then all left with the crowd shouting “One more choon!” and “Here we fucking go!” yet again. They came back on and played Laced, a track which reminded me of Oasis in the slower bits and then the Happy Mondays when it sped up.

Tommy thanked Glasgow with a big cheesy smile both arms and thumbs up. The music restarted with Lay Down. Tommy walked off stage first clapping respect to the crowd. Then towards the end the powerful Matt took it to another dimension at the front of stage, whilst Johnny was running in rings at the back to the melody with his guitar. Matt and Johnny both held their guitars up vertically while playing the final notes. Then all members left the stage clapping their respects to the fans.

The fans left the venue in euphoria. En route to the exit you could see the band’s VIP room. Matt appeared and crowd members rushed over. He quickly ran for cover!

This gig should go in the history book. 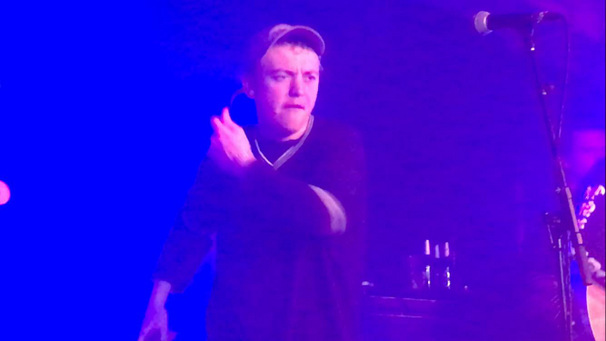