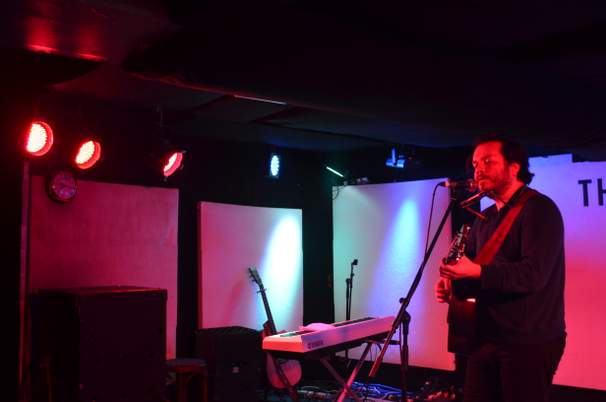 Film scorer and country singer songwriter David Ramirez has arrived in the UK for a tour promoting his new album ‘We’re Not Going Anywhere’. Ramirez is a well established musician who has released six albums since 2003. We find him in the small but legendary Louisiana, one of a few of Bristol’s older music venues that seems to be still holding on.

Ramirez is supported solely by Scottish singer songwriter Kerri Watt, and she warmed the crowd with her calm presence and beautiful lyrics. She had an impressive vocal range, low husky tones mixed with higher notes. Whether it was slow acoustic or more upbeat piano riffs, she was hypnotising to watch.

Armed only with an acoustic guitar and a harmonica (not forgetting a tumbler of whiskey, no ice) Rameriz took to the stage alone. Opening with ‘Find the Light’ his generally sombre tone was set. He hit those long notes so beautifully, his emotion poured out of him and touched every person in that audience. As he stood up on his tiptoes during the chorus, his body seemingly contorted to get the notes out, it seemed like his whole body sand with him, mind and soul. He had this almost Elvis-like bipedalism, with lovely pointed boots and all.

His lyrics are incredibly relatable, very much rooted in reality. Each song told a story and the audience was enraptured by each one. And yet there always seems to be someone else that he is actually singing the song to, it may just be a trope but in each song he generally uses the pronoun ‘you’ rather than ‘she’ or ‘he’. As he seems to get lost in his own performance one could imagine that in his mind’s eye the protagonist of each song is standing right in front of him. It was generally an emotional battering as Rameriz took us through his inner turmoil and past disillusionments. His eyes were mostly closed in this hugely introspective performance, his pain swathing the room.

He sang his way through a very large repertoire, barely even played stuff on the new album. For the last few songs he took requests, his fans already well-versed on his new stuff. It seemed he kept the best till last as he really poured his soul into every word and note of each song curling his lip into a snarl and growling into the mic. There was a real sense of sorrow in his songs—yearning loss—but some hope too. Nearing the end with ‘Telephone Lovers’, a song from the new album, his story was conveyed with such raw emotion that for anyone listening who had ever had to endure any kind of long distance relationship it hit home like a steam train.

He has an epic vocal range: he really has an amazing voice and talent. He’s able to hit high notes and then go almost as deep as Leonard Cohen. Although it is clear where he takes a lot of inspiration from, he is a far better singer, and much more powerful than a lot of those he may have drawn from. It all felt very original.

His guitar work was simple but effective, he didn’t need much complicated finger picking and the show was more about his voice. Also lyrically very talented, his choice of words just went together really well. He’s always telling a story with his songs, his lyrics seem very literal; whether it’s ‘carrying high heels’ or ‘dancing with old men who spin you around’. He’s down to earth, a real boots on the ground authentic Texan. Anyone can see why he has such a loyal following, to see him perform live was an amazing experience.

David Ramirez played The Louisiana in Bristol, on the 15th January 2018