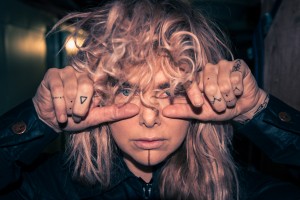 As summer swiftly approaches, the outburst of poppy, light-filled summer bops flittering over the airwaves can at times become so sweet it’s almost sickening. Breaking the mould for the mood of traditional spring releases, however, are Swedish duo True Moon, whose self-titled debut record explores the darkness that exists within all of us, with powerful, untamed lyrics which speak of lust and desire, rejection and betrayal, solitude and alienation, death and re-birth, all wrapped up in a darkly enticing cocoon of moody, grungy post-punk drawn from the mutual frustration of vocalist and bassist Karolina Engdahl and guitarist Tommy Tift over the tame, sanitised ‘rulebook’ that the Swedish music scene is reigning in its creativity to fall in line with. That anger translates audibly into the tracks on this record from the get-go: the insistent, menacing rumble of the bassline in the opening of ‘Voodoo’ lights a fire deep in the guts of the listener, which builds to a roar as Engdahl’s vocals soar majestically over the infectious melody that strings the whole track together. The dark groove of the bridge adds a layer of intricacy to this powerful anthem of self-belief and defiance, where the influence from British post-punk icons like Joy Division and the early records from the Cure is not only audible, but raised on a pedestal and proudly displayed. The raw, unsullied nature of the production is highlighted by tracks like ‘Our own darkness’ and ‘Run run run‘, the former an enchantingly atmospheric wave of haunting vocals and dramatic guitars, the latter a pure post punk delight with its riot inducing chorus and harrowing refrain: ‘When everything hurts/Kill me first’.

‘True Moon’, a track which is given the esteemed position of having its title mirror not only the album’s title but the name of the band as a whole, does exactly as one might expect, encompassing the very essence of the murky, haunting atmosphere of this ambitious piece of musical art, pierced through with the black-hearted grandeur of Engdahl’s vocals, which are the constant gleaming onyx centrepiece in amongst this record’s maelstrom of deep, resonating spunky guitars and basslines. The harrowing metaphors of ‘True Moon’s lead single ‘Sugar’ help create a dangerously dark, seductive, almost supernatural edge to the record, an effect added to by the sensual yet stark vocals of ‘Honey’, dripping in a deceptively dark allure. ‘Just like smoke’ hums with electricity, and the unrelenting ticking woven low into the mix carries the track on a wave of urgency and anticipation into a mysterious underworld of shadowed alleyways, illicit card games veiled by sleight of hand and deadly, knife sharp smiles. ‘Guns’ is kept flowing by the repetitive drum loop indicative of a marching band which serves as a mostly stripped back canvas over which the vocals can glide like inky black silk, in contrast to ‘In the dead of the night’, whose darkly infectious riffs and unrelenting drum beats make it the perfect soundtrack to frustration fuelled midnight drives down empty, florescent lit motorways. ‘Things I used to tell you’ doesn’t really have anything new to add to the mix, and is possibly the least eventful track on the record, however not much could overshadow the record’s closing track, ‘Guns RMX’, with its added layers of moody, swooping electronics which serve to make this the most ambitious, artistic and powerfully resonating song on this dark gem of a debut record.

‘True Moon’ is a truly magnificent artistic feat, especially when you learn that vocalist Karolina Engdahl tracked all 11 songs in just 90 minutes, each in one take. The combination of the black, misty melodrama and gut punching punk grandeur of this record gives it an atmosphere unlike anything else you are likely to hear this year- it is a velvety black passport into another subterranean world of fiery rebellion and enticing black shadows that seem to beckon, inviting you to explore the dark epicentre of this band’s creativity and passion. True Moon wanted to break the mould in Swedish music? They’ve certainly managed to do that, and from the looks of this impressive debut record, they are dead set to take the rest of the music world by storm too.

‘True Moon’ is out on April 28th via Lövely Records.