Colin Stetson and Sarah Neufeld are a Montreal based duo who have combined their respective solo approaches in a way that is both seamless and uncompromising. Keeping with the parameters of minimalist, non use of overdubs or looping technology employed in their previous solo recordings, Stetson and Neufeld create rich and exotic soundscapes and song structures wherein Neufeld’s exquisite violin and voice meet the myriad sounds of Stetson’s saxophones, clarinets and muted vocalisations to create a sound that is reminiscent of earlier works, yet entirely new and surprising. Both have individually performed and recorded with some of the most illustrious names in music. Neufeld has been a member of Arcade Fire since 2003, and continues to tour with them, having contributed to their four hugely successful studio albums. Stetson has also contributed to and toured with Arcade Fire, along with Bon Iver, Tom Waits and our very own Sinead O’ Connor to name but a few.

They released their critically-acclaimed Never Were The Way She Was on Constellation Records in April 2015 and are now bringing their unique sound to Cork’s Guinness Jazz Festival.

• You have both worked with Arcade Fire and contributed to each of their hugely successful albums. Was it via this association that your relationship with one another began or does it stem further back?

Sarah has been a member of the band since 2003. We met in 2006 while performing in other bands. Colin became involved, contributing to Neon bible and touring, in 2007.

• When did the first discussions and ideas of working together on a collaborative project emerge?

We’ve collaborated in many different contexts over the years. After Sarah released her first solo record, Hero Brother, we began exploring the concept of combining our individual styles to create a duo, using the same techniques we’d both been developing throughout our work as soloists.

• Can you describe the recording process for me? Recording in the rurality of Vermont and in the absence of overdubbing, looping and sampling sounds like a wonderfully bare and stripped down approach and organic atmosphere to create music in.

Its wonderful recording in the country. We wrote most of the record in this setting as well, drawing on the spaciousness and earthly immersion for inspiration and perspective. Our recording process is quite simple. We employ some extended microphone technique to achieve the uber intimacy of Colins instrument sounds, but mostly classical recording technique to achieve the best natural sounds possible. We write the duo music in the way it is to be performed, so there’s no need for looping or layering. It’s simple, challenging, and with extreme limitation also comes expansiveness and possibility.

• Was the initial intention to take what you’ve both done with your solo projects and combine them and see how they would work together? Or was the idea of the collaboration to create something completely detached from previous works and of itself?

Yes the intention was to combine our solo voices. One always creates something new by combining two entities, but we felt like this was a natural and complimentary development. 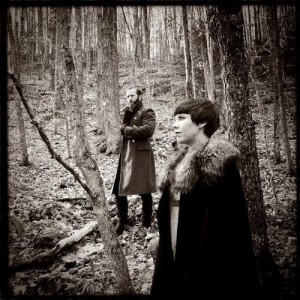 • Are both your instruments ones that instinctively work together or was it a challenging match? Also, a lot of Colin’s solo work is quite loud and of a high frequency, was there a conscious effort on Sarah’s part to alter how she plays to suit Colin? And vice versa did Colin feel a tendency to tone down his style of play in any way in order to allow the two unique styles to co-exist?

We found that the combination of Sarah’s violinistic style and Colins saxaphonics worked the best with the bass and tenor, as well as the addition of the contra bass clarinet. The timbres of the instruments do not always combine easily, but this provides yet another limitation with which to explore and strengthen from.

• You have said that in making the album you were guided by the narrative of a girl who ages as slow as mountains, searching for a world that resembles her experience. Was this a preconceived theme or one that emerged as being dictated by the music?

The shell of the idea was a starting point for the whole process. We were exploring concepts around the perspective of time. Even as simple as something like the aging process creating the illusion that time speeds up is fascinating. We were immersing ourselves in nature and feeling how fleeting our existence is in comparison to a mountain or a tree. The character of the girl who ages as slow as a mountain began to emerge, and as we continued writing, this narrative continued to unfold.

• Is that narrative necessary for people to understand the music? How much free ground do you regard listeners as having to configure their own interpretations?

Not at all. We wish the listener to be free of any preconceived ideas. This includes the age old “but what kind of music is this” question, and it includes our own narrative that we’ve attached to the music. We hope that the listener can take in the music that they’re hearing and create their own stories, have their own experience. 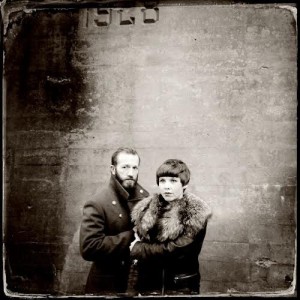 • Of both your combined array of experiences performing with world renowned bands and groups, which has been the most impactful on your playing style and how much do these experiences bleed into your own solo compositions?

Everything we do affects everything else we do, that is for sure. It’s also true that when you spend a long time in isolation, developing something out of only yourself, pushing this way and that, that your voice as a musician becomes changed forever. We’re always trying to take ourselves further, so every state we reach is impermanent.

• How does the album translate live and what do you hope the audience takes away from the live experience?

We put all our energy into the stage when we perform. We try to get outside of our minds and let the music pass freely. We hope that the audiences do somewhat of the same thing, so that in fact we’re having a conversation.

• You’re playing the beautifully intimate venue of the Triskel Christchurch here in Cork. Are you looking forward to being part of the historic Guinness Jazz Festival and what kind of reception are you expecting from the Irish audience?

We’re thrilled to be performing in Cork. This will be our first visit. and we’ve heard so many great things. Irish audiences are among the best in the world- open, warm, and loud!

You can catch Colin & Sarah’s performance at the Triskel Arts Centre on Friday 23 October at 8pm. Tickets are €23 and can be purchased at http://triskelartscentre.ie/events/3089/colin-stetson-sarah-neufeld-duo-guinness-cork-jazz-festival/.

Here’s a little taste of what to expect:

Their stunning collaborative album Never Were The Way She Was is available on iTunes.