Bosnia: one eye on the future, one eye in the past 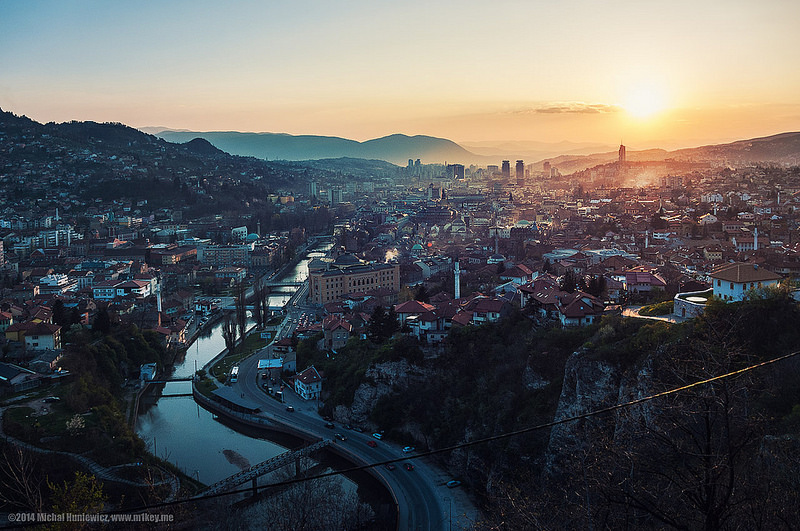 Photo Credit: Michal Huniewicz,  under Creative Commons licence
LARA took a moment to size me up and, with customary incredulity, produced the inevitable response. “”Bosnia? But isn’t there a war going on there?”” I was sitting in a cafe in Dubrovnik with some new found American friends from New York, explaining my plan to catch a bus to Mostar the next morning. Their reaction was pretty much identical to that of everyone else to whom I’d explained my intentions. Not only was it popular myth that Bosnia retained war zone status, but overwhelmingly popular myth that there was no earthly reason for any sensible human being to want to go there.

This, emphatically, is Bosnia’s problem. Although the Dayton Accord of December 1995 officially put an end to the brutal conflict that had raged for three painful years, the stigma of war hangs oppressively over the country and has left it feeling hopelessly abandoned.

Dubrovnik (right) itself, the jewel of the Dalmatian coast, suffered a catastrophic decline in tourism following the eight-month siege by the Serbian Federal Army in the early nineties, which tore through its patchwork-quilted roofs and historic architecture. But the city has clawed itself back to prominence and the quaint cobbled streets and majestic city walls are once again bustling with an eclectic mix of tourists, backpackers and raucous school children. Bosnia has not been so fortunate. Years of television headlines depicting Kate Adie and John Simpson cowering for shelter while shells rained down behind them have left the country not only synonymous with war, but pictured as purely comprising the inhospitable scenes of devastation beamed to worldwide television audiences.

I was intrigued. Like so many students on summer vacation, the lure of travelling prompted the packing of a few essentials and the purchase of an inter-rail pass, but as everyone else would be clamouring to Barcelona, Vienna and Prague, I succumbed to my fascination and headed to Bosnia. My friends sighed with resigned acceptance. I neglected to tell my parents.

Such is the power of television. Bosnia is as safe for travellers as any other country in Europe and immeasurably more fascinating. For every lonely ruin there is a magisterial mountain pass, for every desolate roadside village an opulent mosque or quaint Orthodox Church.

Mostar is the epitome of these juxtapositions. Britney Spears blasts from cafes to compete with the wailing of the Muezzin, the gorgeous azure blue Neretva River ambles languorously beneath the ruined bridges to a picture postcard backdrop of towering mountains. Windy cobbled streets intersect the city’s charming old buildings, and Turkish curios provide an oriental charm. But round every corner is a facade riddled with bullet holes, a roofless shell of a formerly grandiose apartment, the recriminating rubble of brutal war, the lingering remembrance. A smattering of spray-painted graffiti on a wall reads, ‘People of the world help us. Stop killing children.’

Along the old frontline, crumbled mortar lies in heaps at the feet of the leering, ghostly faces of annihilated houses. Small window holes that just five years ago housed breathless snipers now gaze vacantly at the sun-baked pavements below. The terror once manifest here remains palpable. The reminders hauntingly visible. History very much alive.

Mostar remains deeply divided along ethnic lines, and recovery is a slow and painful process, but tensions have eased and segregation is now neither physical nor noticeable. An internationally funded multi-billion dollar reconstruction and regeneration programme is slowly rolling into action nationwide – rebuilding has started on the historic Stari Most (Old Bridge) in Mostar – but it will be a long hard struggle while the world’s back remains turned on Bosnia.

The effect on employment and the economy have been devastating. Nearly a third of the population were unemployed in 1998 and the old currency, the Bosnian Dinar, was subject to such exorbitant inflation it has become defunct. The new Konvertible Mark, tied to the Deutschmark, is slowly becoming its replacement but German currency still holds all the weight. As I stepped off the bus in Mostar, backpack screaming ‘tourist’ to the curious onlookers, I was accosted by 32-year-old Anté, whose pigeon-English was sufficient to communicate his wish for my financial assistance. He was a carpenter before the war, he explained, and in the current climate his job prospects were zero. He had two young daughters, aged six and eight. He was desperate.

I slipped him a few notes and bought him a beer. His gratitude was sincere and there was no hint of bitterness at the vast disparity in the hands life had dealt us. Anté was fascinated with England; incredulous that Manchester United came from a city called Manchester and not London, and totally disbelieving that 10 million people resided in the capital.

“”No, no,”” he said, shaking his head. “”Whole Bosnia two million people. No London ten million.””

Anté seemed fairly typical of the Bosnian people. Faced with the struggles of supporting a family and with little prospect of his country recovering sufficiently to give him a realistic chance of resurrecting his career, he is nevertheless accepting his fate with stoicism.

The three-hour bus journey from Mostar to Sarajevo is the most shocking and spectacular, breathtaking and devastating of journeys.

Trundling away from Mostar’s crumbling suburbs, you are immediately thrown into the barren countryside of early nineties newsreels. Desolate farmhouses fly by at the side of the road, whole villages lie mournfully deserted and the menacing black faces of caves and alcoves spy on the road as if they still concealed snipers peering through viewfinders. Around a corner there’s an overhang on which a desperado lies with finger tensed around a machine gun trigger. I expected to be faced with a roadblock at any moment.

It is no wonder that this road was impassable for much of the war. The steep banks claustrophobically hem in the windy pass providing hundreds of perfect vantage point for snipers. Far above, clusters of forest fires perform smoky pirouettes as if recalling the splutters of rifle fire.

All the television footage comes flooding back, almost as if the images were contemporary and the gun barrels still trained on the road. But it is a magnificent surprise to discover what the cameras excluded from their snapshots of Bosnia.

As the coach climbs away from the Neretva, the verdant banks of the towering Dinaric Alps segue sharply into each other and recline so serenely you expect Julie Andrews and a flock of children to skip past. Indeed, it is the Austrian Alps I am most reminded of, yet here the mountains seem altogether more mysterious, more untouched and untouchable. The coach’s laborious climb and skimming descent combine to offer privileged views few imagine Bosnia possesses.

Almost without warning, the roadside is cluttered again. Not with roofless farmhouses crouching like vagrants, but with brightly coloured high-rise tower blocks clinging to the sides of the mountain basin in which Sarajevo lies.

Bosnia’s capital hosted the Winter Olympics as recently as 1984, and guidebooks maintain nearby Mount Jahorina boasts some of Europe’s best skiing. But Pale, the resort from which the pistes are accessed, falls in Bosnian Serb territory and is now difficult to reach without shelling out for an official package. Sarajevo’s wounds are there if you look for them but are less oppressive than those in Mostar, and the atmosphere is less subdued by memory. I strolled along snipers alley, Europe’s most feared and deadly street just five years ago, which now relaxes under the weight of rattling trams, its adjacent buildings echoing car horns rather than the popping of rapid fire. The famous Holiday Inn, perhaps the most enduring image of the televised war, sits resplendent in fresh licks of yellow, chest puffed out in pride at its status as a fortress never breached.

During the war, The Holiday Inn was the only hotel open for business and the world’s media cowered there, beaming frantic reports and shocking images to living room television sets.

Sarajevo is now finding its feet and it remains an ethnic microcosm, buzzing with cosmopolitan vibrancy. At the heart of the Turkish Quarter lies the cobbled Bašèaršija, lined with stalls and curios and writhing with crowds as evening closes in. From here, along the pedestrianised city centre to the eternal flame, UN troops mingle with teenage lovers, old couples sup coffee at cafés sprawling onto the pavement and a smattering of tourists and aid workers populise the burgeoning restaurants. The locals are well dressed and take pride in their appearance. There’s a palpable sense of the city finding its feet and of a new generation looking forward, even if they can never stop looking back.

There has clearly been money spent here, but much of the repair work is superficial. Serb mortars pummelled the grandiose National Library in 1992 and, although it has been given a face-lift, a gutted shell is all that remains behind the renovated facade. On it’s doors, a plaque reads: ‘Do not forget. Remember and warn.’ On the streets that surround it, the scars of shells have been filled with red rubber and symbolically named Sarajevo Roses. It would be impossible to forget.

But it is not only recent history Sarajevo is notorious for. Over the Miljacka River, close to the National Library, stretches the bridge on which Serb nationalist Princip shot Archduke Franz Ferdinand in 1914, triggering World War One.

A short walk out of the bustling centre takes you to the Koševo stadium and an unbearably moving memorial to the casualties of war. As far as the eye can see, ubiquitous white gravestones pay silent tribute, the majority of them listing 1993 as the year in which a generation was cut down in its prime. There are proud old men lying here for their country, but most of these sententious gravestones stand for teenagers or twenty-somethings whose lives were sacrificed in futility. As dusk falls, there could be few more poignant places to be.

Bosnia, then, is slowly recovering, but it badly needs the income of a revived tourist trade to bolster its crippled economy and fund badly needed regeneration work. In Zagreb, I bumped into an American traveller who had taken the same route through Bosnia as I had. ‘It’s the most amazing thing I’ve ever done,’ he told me. We both set off to evangelise.

Latest posts by Guernica (see all)

About the author: Guernica View all posts by Guernica